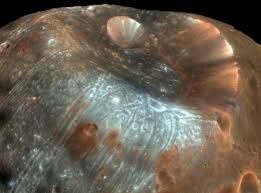 IRB COLOR
Both PSP_007769_9010 and PSP_007769_9015 were made by combining data from HiRISE’s blue/green, red, and near-infrared channels. The color data accentuate details not apparent in the black and white images. For example, materials near the rim of Stickney appear bluer than the rest of Phobos. Based on analogy with materials on our own moon, this could mean this surface is fresher, and therefore younger, than other parts of Phobos.

“MARSSHINE”
This is a close-up and enhanced part of image PSP_007769_9015. In the original image, detail in the black, un-illuminated portion is not apparent. However, seen in enhanced detail here, craters are clearly visible. This faint illumination is from reflected light off of Mars (“Marsshine”). This is directly analogous to “Earthshine,” where reflected sunlight from our planet illuminates the dark side of the Moon. The ability to see features on Phobos illuminated by Marsshine demonstrates the high sensitivity of the HiRISE camera.

Cycloptichorn
0 Replies
1
Reply Tue 3 May, 2011 07:59 pm
@gungasnake,
Thats not reflection, as in a metallic surface. Its probably reflectance of a substance like a salt or a silicate. Notiv=ce how a crater ejected some material from depth right in the middle , and this stuff has an oxide look.
Also, we can see stress fracs or actual structural lineaments around the entire ejecta area.

A neta thing to note is that PHOTO 7 of Diemos, is a STEREO PAIR.
If you have a stereo viewer you can see Diemos in 3D. (a pair of student stereo glasses will work-I just happen to have a micro view stereo viewer for aerial photos.).
An easier way is to cut out the strip so that you can overlay a same spot by "relaxing" your eyes to gradually cross and you can see the 3D without glasses. (Its a trick that we still teach in aerial photo interpretation classes and survey transfer). Apparently the parallax views were pretty good to get the quality from the scans of Diemos.
0 Replies
1
Reply Tue 3 May, 2011 10:24 pm
@gungasnake,
Quote:

Actually, they're not supposed to have regular striations like that either... Richard Hoagland's take:

Hoagland actually does have high-level contacts at most space agencies; he says people at ESA are claiming that their radar probes are showing rectangular interior spaces in Phobos. Phobos was known to be non-solid from orbital parameters as early on as the 1960s.