The secrets of the cat lap.

Forums: Cats, Pets, Animals, Lapping Techniques
Email this Topic • Print this Page
Reply Mon 15 Nov, 2010 03:25 am
This is really Tsarstepan's thread, since he tweeted about it...but it's too interesting (at least to ailurophiles) for me to wait for him to post about it here.


Only the cat would need vast hordes (I exaggerate, of course) of engineers to unlock its secrets.

For Cats, a Big Gulp With a Touch of the Tongue
By NICHOLAS WADE
Published: November 11, 2010


It has taken four highly qualified engineers and a bunch of integral equations to figure it out, but we now know how cats drink. The answer is: very elegantly, and not at all the way you might suppose.

Cats lap water so fast that the human eye cannot follow what is happening, which is why the trick had apparently escaped attention until now. With the use of high-speed photography, the neatness of the feline solution has been captured.

The act of drinking may seem like no big deal for anyone who can fully close his mouth to create suction, as people can. But the various species that cannot do so — and that includes most adult carnivores — must resort to some other mechanism.

Dog owners are familiar with the unseemly lapping noises that ensue when their thirsty pet meets a bowl of water. The dog is thrusting its tongue into the water, forming a crude cup with it and hauling the liquid back into the muzzle.

Cats, both big and little, are so much classier, according to new research by Pedro M. Reis and Roman Stocker of the Massachusetts Institute of Technology, joined by Sunghwan Jung of the Virginia Polytechnic Institute and Jeffrey M. Aristoff of Princeton.

Writing in the Thursday issue of Science, the four engineers report that the cat’s lapping method depends on its instinctive ability to calculate the point at which gravitational force would overcome inertia and cause the water to fall.

What happens is that the cat darts its tongue, curving the upper side downward so that the tip lightly touches the surface of the water.

The tongue is then pulled upward at high speed, drawing a column of water behind it.

Just at the moment that gravity finally overcomes the rush of the water and starts to pull the column down — snap! The cat’s jaws have closed over the jet of water and swallowed it.

Full story at the url I gave...and a cute video. 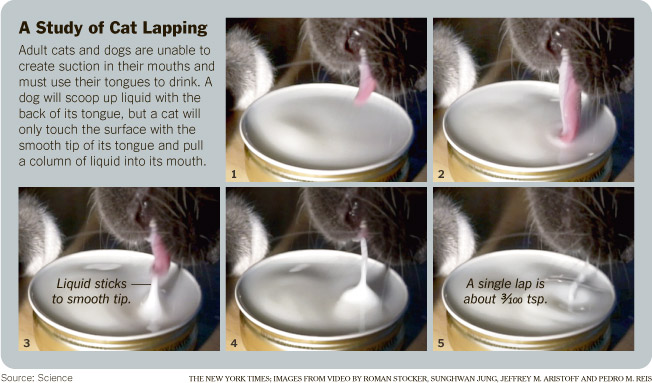 Not everyone starves their pets . . .


You're a dogged bastard ya know.

Ever wondered how cats lap up milk from their bowls so elegantly without spraying it over their mouths and chin? Scientists at MIT and Princeton now have an explanation for this phenomenon. When cats and other felines like tigers drink liquids, they insert their tongues in and out of the bowls so fast that a column of liquid is formed between the moving tongue and the liquid’s surface. The cat then closes its mouth, while lapping off the liquid, all in one quick motion. On an average, cats can lap 0.1 milliliters of liquid in each lap and are able to do four laps per second.

The study, which was published in the journal Science, further adds that the liquid column is created by the cat achieving a balance between gravity and inertia and that even a split-second delay on its part will create an imbalance that will break the column and cause the liquid to fall back in the bowl.
0 Replies
1
Reply Mon 15 Nov, 2010 10:56 am
I don't got no steenking cats . . .
1 Reply
1
Reply Mon 15 Nov, 2010 02:37 pm
@Setanta,
It shows!

That picture you posted earlier, was that Shelob or Ungoliant?

And this would be a problem because...?


I think Farmerman is suggesting that cats descending from this two legged walking cat will evolve to become the overlords of all human beings and human civilization.
1 Reply