LONDON — Julian Assange, the WikiLeaks founder, and Daniel Ellsberg, who leaked the Pentagon Papers, lashed out together on Saturday at the Obama administration’s aggressive pursuit of whistle-blowers, including those responsible for the release of secret documents on the Iraq war. 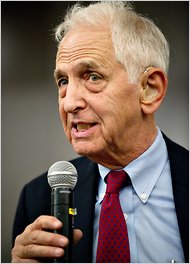 Mr. Assange also said that WikiLeaks, which released the trove of almost 400,000 Iraq war documents on Friday, would shortly be posting an additional 15,000 remaining secret documents on the Afghan war.

Mr. Assange, speaking at a news conference in a London hotel a stone’s throw from the headquarters of Britain’s foreign intelligence agency, MI6, was joined by Mr. Ellsberg, 79, the former military analyst who leaked a 1,000-page secret history of the Vietnam War in 1971 that became known as the Pentagon Papers.

Mr. Ellsberg, who said he had flown overnight from California to attend, described Mr. Assange admiringly as “the most dangerous man in the world” for challenging governments, particularly the United States. He said the WikiLeaks founder had been “pursued across three continents” by Western intelligence services and compared the Obama administration’s threat to prosecute Mr. Assange to his own treatment under President Richard M. Nixon.

Both men hit out at what they described as the Obama administration’s aggressive pursuit of whistle-blowers, which Mr. Ellsberg said put the United States on a path to the kind of repressive legal framework that Britain has under its broad Official Secrets Act. He said the criminal investigations under President Obama of three Americans accused of leaking government secrets represented a new low.

The three men he was referring to were Pfc. Bradley Manning, a former military intelligence analyst suspected of providing the documents on Afghanistan and Iraq to WikiLeaks; Thomas Drake, an official with the National Security Agency who was indicted this year; and Shamai Kedem Leibowitz, an F.B.I. linguist who pleaded guilty to leaking five classified documents in late 2009.

Mr. Ellsberg said the Pentagon’s demand that Mr. Assange “return” any classified materials in his possession was carefully couched in language similar to that used in the aftermath of the Pentagon Papers release, when he was threatened with criminal prosecution for espionage. “Secrecy,” Mr. Ellsberg said, “is essential to empire.”

Mr. Assange also dismissed what he described as the Pentagon’s deliberately “nonchalant” reaction to his release of the Iraq documents on Friday. He said they “constituted the most comprehensive and detailed account of any war ever to have entered the public record.” ...<cont>

Thanks, Deb.
(Taking a look now)

Use of Contractors Added to Chaos of Iraq War, Trove of Documents Shows
..
Read More:
http://www.nytimes.com/interactive/world/war-logs.html?emc=na

You and I with our recent government behaviour history know all about contracting out and its perils, eh?


A buddy of mine who is in the army and has done three tours has told me nightmare stories about blackwater. Once in particular he described how his convoy was on it's way to survey the conditions of a Iraqi town. They camped outside of town and would start early in the morning. He said at one point in the night the Blackwater guys rolled through and went into the town. they messed the place up real bad. The next day, instead of being able to do their mission, they had to set up emergency hospitals and administer first aid to the people of the town.

Mercs are the most ******* terrifying concept ever.

These heroes, these brave men who have sacrificed a great deal to expose these war crimes and war criminals should have statutes raised portraying them.
1 Reply
1
Reply Sat 23 Oct, 2010 08:34 pm
@dlowan,
Quote:

You and I with our recent government behaviour history know all about contracting out and its perils, eh?

Oh yes.
We know all about that!
0 Replies
1
Reply Sat 23 Oct, 2010 08:53 pm
@JTT,
The thing is, the US government has repeatedly denied having much of the information which has been made available by the "whistle blowers" in these leaks. Yet their military had the information the whole time.

I can only see this sort of deliberate secrecy as a cover-up of the extent of the senseless horror which occurred in Iraq. This is information that we, as the citizens of the countries involved, had every right to know about. Most of information in the leaks I've read (so far) has been detailed information about the thousands of civilian causalities of the invasion & the ongoing conflict... who they were & how they died.

Hardly top secret "sensitive" military information, that I can see.
What we are seeing is an incredibly detailed record of a huge war crime, inflicted upon an innocent population by far more powerful forces. That is what the cover-up is all about.
People might just become extremely skeptical about what all these unnecessary deaths, all the suffering, actually achieved. And they might become even more reluctant to accept future senseless wars.
0 Replies
1
Reply Sat 23 Oct, 2010 09:11 pm
@msolga,
MsOlga: Now I know which charity to donate to this thanksgiving. Thanks for the pointer!
1 Reply
1
Reply Sat 23 Oct, 2010 09:18 pm
@Thomas,
I might just do the same as you, Thomas.
Thanks for putting the idea into my head!
0 Replies
1
Reply Sat 23 Oct, 2010 10:18 pm
From today's Independent (UK).
A long, thoughtful article by Robert Fisk.
Well worth a read. :

.....The truth, of course, is that if this vast treasury of secret reports had proved that the body count was much lower than trumpeted by the press, that US soldiers never tolerated Iraqi police torture, rarely shot civilians at checkpoints and always brought killer mercenaries to account, US generals would be handing these files out to journalists free of charge on the steps of the Pentagon. They are furious not because secrecy has been breached, or because blood may be spilt, but because they have been caught out telling the lies we always knew they told.

WikiLeaks yesterday released on its website some 391,832 US military messages documenting actions and reports in Iraq over the period 2004-2009. Here are the main points:

Hundreds of incidents of abuse and torture of prisoners by Iraqi security services, up to and including rape and murder. Since these are itemised in US reports, American authorities now face accusations of failing to investigate them. UN leaders and campaigners are calling for an official investigation.

Coalition leaders have always said "we don't do death tolls", but the documents reveal many deaths were logged. Respected British group Iraq Body Count says that, after preliminary examination of a sample of the documents, there are an estimated 15,000 extra civilian deaths, raising their total to 122,000.

The shooting of men trying to surrender

In February 2007, an Apache helicopter killed two Iraqis, suspected of firing mortars, as they tried to surrender. A military lawyer is quoted as saying: "They cannot surrender to aircraft and are still valid targets."

Al-Qa'ida's use of children and "mentally handicapped" for bombing

Hundreds of civilians killed at checkpoints

Out of the 832 deaths recorded at checkpoints in Iraq between 2004 and 2009, analysis by the Bureau of Investigative Journalism suggests 681 were civilians. Fifty families were shot at and 30 children killed. Only 120 insurgents were killed in checkpoint incidents.

Reports detail US concerns that Iranian agents had trained, armed and directed militants in Iraq. In one document, the US military warns a militia commander believed to be behind the deaths of US troops and kidnapping of Iraqi officials was trained by Iran's Islamic Revolutionary Guard

but because they have been caught out telling the lies we always knew they told.

That's a remarkably similar comment to that of John Stockwell, the CIA head who could no longer stomach the atrocities the US commits on a regular basis.

He said in regard to Angola:

"And all four paragraphs would be false. Nothing to do with the truth. Designed to play on events, to create this impression of Soviet and Cuban aggression in Angola. When they were in fact responding to our initiatives.

And the CIA director was required by law to brief the Congress. This CIA director Bill Colby - the same one that dumped our people in Vietnam - he gave 36 briefings of the Congress, the oversight committees, about what we were doing in Angola. And he lied. At 36 formal briefings. And such lies are perjury, and it's a felony to lie to the Congress.

He lied about our relationship with South Africa. We were working closely with the South African army, giving them our arms, coordinating battles with them, giving them fuel for their tanks and armored cars. He said we were staying well away from them. They were concerned about these white mercenaries that were appearing in Angola, a very sensitive issue, hiring whites to go into a black African country, to help you impose your will on that black African country by killing the blacks, a very sensitive issue. The Congress was concerned we might be involved in that, and he assured them we had nothing to do with it.

Does anyone see a pattern here?

0 Replies
1
Reply Tue 26 Oct, 2010 08:43 am
@msolga,
I was under the impression that this was a Philosophy forum. I don't believe that endowing the U.S., with human characteristics is something a philosopher would serious debate about.
1 Reply
1
Reply Tue 26 Oct, 2010 10:46 am
@NoOne phil,
This is obviously a puzzle and word game forum. I doubt any puzzle masters would try and endow philosophy with any debate characteristics.

A buddy of mine who is in the army and has done three tours has told me nightmare stories about blackwater. Once in particular he described how his convoy was on it's way to survey the conditions of a Iraqi town. They camped outside of town and would start early in the morning. He said at one point in the night the Blackwater guys rolled through and went into the town. they messed the place up real bad. The next day, instead of being able to do their mission, they had to set up emergency hospitals and administer first aid to the people of the town.

Mercs are the most ******* terrifying concept ever.

How then should the USA deal with these war criminals, Art?

WikiLeaks proved the US lied