He pretends that everything is a camera - the switch that turns on my reading lamp, a deck of cards, my alarm clock, really, any thing small and rectangular. Once in a while he gets his hands on my snapshot camera and plays and once upon a time he even got my very expensive digital camera out for a little (thankfully short lived) test.

As I don't have a lot of experience with kids (I'm Mo's guardian), I sometimes think I'm just flattering myself by mistaking play for interest. (Did I mention that I'm a professional photographer?)

I did buy him one of those "one time" cameras and he did a pretty good job of taking pictures of whatever I suggested. The trouble was that by the time the film came back from the lab he wasn't too interested in those pictures anymore. (Did I mention that I first found photography when I was seven years old?)

So I'm thinking one of those P-Zone cameras that print the instant sticker pictures. The camera is only $10.00 but the sticker film is a bit spendy. So then I thought, "why not a cheapy digital camera?"

I'm asking all of you experienced parents out there - If I spend some dough on a digital camera will it just end up in the toy rubble or does it have a fighting chance of actually engaging him for a while.

Thank you for your help and for not laughing at me.
Type: Discussion • Score: 1 • Views: 6,976 • Replies: 55
No top replies
1
Reply Thu 13 Nov, 2003 05:01 pm
The camera may indeed end up on the toy rubble, but on the other hand the child may take to photography like a fish to water. He knows that you are a photographer, and is copying you as a means of being "grown up". Says a lot about how well he's adapted to your guardianship.

Get him the camera, and see what happens. Digital cameras aren't all that expensive any more, and they are almost fool proof. Just the thing for a child to begin learning about the aesthetics of picture making.
0 Replies
1
Reply Thu 13 Nov, 2003 05:04 pm
As a child I was very much interested in cameras. I think it's not an uncommon gadget-type interest for young boys.

I even found an old photography book and made myself one of those "peephole" (dunno what they are really called) cameras. It never worked (I didn't seal it right, made the peephole too big, and all the film ended up white) but it was fun.

My interest lasted many years, but at that age few of my interests persisted (besides scratching my bum) for long. He may well be interested but the kids that age that I know have fickle interests.

http://www.zillions.org/Features/Digital/dcam001.html
0 Replies
1
Reply Thu 13 Nov, 2003 06:13 pm
I think I'd get him a Fisher-Price toy camera until he can understand the concept of film, developing and such. I think at his age he is immitating you and prolly isn't interested in any more. The one time use cameras would be fun just for you to see what he finds interesting to "capture" though.
0 Replies
1
Reply Thu 13 Nov, 2003 06:14 pm
What fun! I'd say go for the inexpensive digital, especially if you could find one with big buttons. 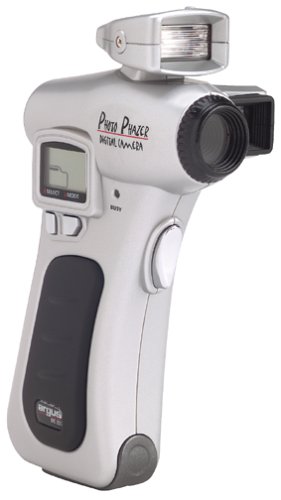 My dad used to have one of those cameras that shoots the pic out the front - and it develops while you watch. What was that thing?

Anyway - my cousins' children loved that thing. They loved watching the pix develop - they loved that they could show people the pix that had just been taken. You can sometimes find good deals on the sticker film at pharmacies if you buy bulk packages. I'd definitely go for it. Easy to use, instant gratification - and it's STICKERS !!! - kids WORSHIP stickers.
0 Replies
1
Reply Thu 13 Nov, 2003 06:49 pm
I'm with Piffka - buy a cheap-o digi camera
0 Replies
1
Reply Thu 13 Nov, 2003 06:51 pm
Hi everybody and thank you for your considered responses; they are much better than the "You're crazy" and "Oh. You're one of THOSE people.."

Asherman, you sum up my thinking on this very well. I'd probably spend as much on some kind of toy that would be destined for the toy rubble pile anyway.

Jeez, Craven. Great minds and all that. Seven must be a very important age.

Camera Obscura is the phrase you're looking for.

Maybe it points to the boy/girl difference but the gadgetry was never my thing (still isn't). It was the making of something that got me in.

Roger, the instant gratification thing has a big influence - that's why I was looking at the P-Zone. Still, at roughly 50 cents a shot it could get expensive quickly. I wondered if the film was really a necessary component - just let him play with the camera. But then I thought I might as well let him continue to use the alarm clock for a camera.

Which really brings me to Swimpy's thought - for $10, without film, the P-Zone is probably cheaper than a toy camera and it might be just as much fun.

Very interesting Ceili. My first camera was a Poloriod "Swinger" (Here I'm giving away my age.) I was hooked. What happened with your kids? Did they like them or did they become toy rubble.

Ahhh, little k. The nanny speaks! That sounds wonderful. A photo album! It would be so cool to watch their progress. I'm thinking even if you only dragged out their camera every once in a while for inclusion it would be an interesting documentary on their lives. Very, very cool.

I DID find that article interesting, fishin'. Thank you. Those kids were much older than Little Mo and they had trouble with those cameras. I doubt he would have the same concerns about picture quality but I know I would. After all, if you want to do a little k type thing you want quality photos.

Hey Piffka, I might order one of those ray-gun cameras for me! For Little Mo, I don't want one that has anything that pops up or pops out or zooms or has any component easy to break off. I'm gonna check out that other one though.

Thank you all for your opinions. I've never really had to consider age appropriateness before and it really is a lot tougher than I thought.
0 Replies
1
Reply Thu 13 Nov, 2003 06:56 pm
Hi, eBeth. You snuck in while I was typing.

Those cameras were called Poloroid SX-70s and I could go on and on about my love of those things! The really early film took a long time to set up. You could soak the image off and affix it to just about anything. My favorite was watercolor paper. Those cameras were just too marvelous. Unfortunately, the "improved" the film and it became less fun.

Poloriod is so very cool but really expensive - more expensive than the Poloriod sticker film even. But you're right about the popularity of stickers - they're stuck all over his bookshelf. Good thing I like Captain Underpants, huh?
0 Replies
1
Reply Thu 13 Nov, 2003 09:12 pm
A digital camera sounds great an probably the cheapest way to go. I would have been in heaven with that when I was a little girl :-D
0 Replies
1
Reply Thu 13 Nov, 2003 11:17 pm
It depends on how much you are willing to spend. I like that with the $10 camera the initial output is negligible and what costs is the film... so then you can truly spend according to his interest, rather than all up front.

I think that most any single-use toy will be destined to get old fast for a 3-year-old. The imitation thing that Swimpy mentions extends its life, but the coolest gadgets ever don't keep the sozlet occupied long, nor either of her best friends. The toys she comes back to are the open-ended ones... stuffed animals, blocks, that kind of thing.
0 Replies
1
Reply Fri 14 Nov, 2003 12:05 am
Boomer - the cameras were quickly added to the heap of stuff I had to pick up daily, but the kids liked the idea of the flash more than the idea of the picture itself.

The stickers in the mini-sticker polaroid type camera are pretty crappy. The stickers lose all colour and definition very quickly. I would go with the digital because of the instant gratification of seeing his art work on the big screen plus you can print out his masterpieces.
0 Replies
1
Reply Fri 14 Nov, 2003 02:40 am
Hmm, Camera Obscura is something I've never heard of so I'm sure that's not the phrase I was looking for (though it might have been the same thing).

Pronunciation: (ob-skyoor'u), [key]
a darkened boxlike device in which images of external objects, received through an aperture, as with a convex lens, are exhibited in their natural colors on a surface arranged to receive them: used for sketching, exhibition purposes, etc.