Forums: Atheism, North Carolina, Politics, Religion, Atheist
Email this Topic • Print this Page
1
Reply Mon 15 Mar, 2010 12:48 am
@dlowan,
what do you mean even in North Carolina. We're not all barney Fife any more than all Australians are Crocodile dundee.
3 Replies
2
Reply Mon 15 Mar, 2010 12:58 am
@Bi-Polar Bear,
North Carolina's constitution explicitly bars nonbelievers from holding public office. Article 6, section 8 states that “The following persons shall be disqualified for office: First, any person who shall deny the being of Almighty God....” (Source)

Hence the word "even" in dlowan's phrase, "even in North Carolina ..."
0 Replies
1
Reply Mon 15 Mar, 2010 04:10 am
@Bi-Polar Bear,
Who's Barney Fife?
1 Reply
7
Reply Mon 15 Mar, 2010 04:43 am
Way up thread someone asked who my opponents might be. While there are doubtless many folks who disagree with my post-theist stance, the two who were behind the specific effort in December are: the head of the Sons of the Confederacy (essentially a white supremacist organization) and one of that group's loyal followers named H.K. Edgerton.

H.K. is an African American gentleman, former chair of the local NAACP, who stands vigil on bridges and downtown wearing a Confederate uniform and carrying the Stars & Bars. After he was drummed out of the NAACP for unspecified reasons he joined the Sons of the Confederacy and started his own Southern Heritage group which shares an address with a hate-mongering print shop in Georgia. (If you've seen racist bumper stickers decrying Obama, you have likely seen their spew.)
3 Replies
1
Reply Mon 15 Mar, 2010 05:11 am
@dlowan,
Barney Fife was a character from a television situation comedy located in North Carolina. 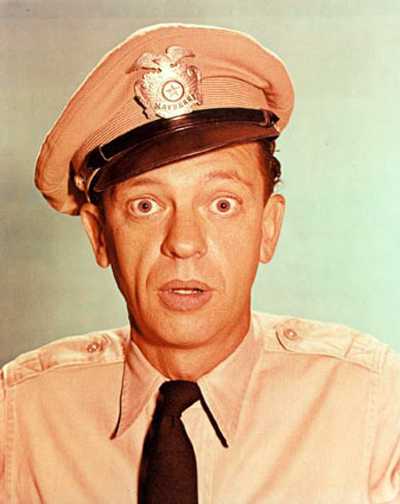 CATHCART: Well, Chaplain - we don’t see much of you around lately.

TAPPMAN: Well, sir - I try and stay out of the way as much as possible. I have the feeling that I make many of the men ... uncomfortable.

CATHCART: Nonsense! I can’t imagine any man not enjoying the benefits of your - uh - presence. Unless, of course, they’re atheists. (he laughs) And I guess there’s not much chance of that. Is there?

CATHCART: What do you mean, you don’t know? Atheism is against the law, isn’t it?

CATHCART: IT ISN’T? Then it’s un-American, isn’t it?

TAPPMAN: I’m not sure, sir.

what do you mean even in North Carolina. We're not all barney Fife any more than all Australians are Crocodile dundee.

Not sure Barney is the most appropriate analogy -- perhaps Jesse Helms, but, notwithstanding the attempt by Thomas to school you on why we should scorn The Old North State and, likely, any of the other narrow-minded, racist and reactionary States south of the Mason-Dixon Line, you were right to take umbrage.

This story depicts an anomaly within NC politics and society, and it is ridiculous and scurrilous to suggest it is emblematic of North Carolinians.

Every State in the Union --- even the enlightened Liberal ones in the NE and on the West Coast, have antiquated laws still on their books which no one takes seriously.

Our furrin friends need not worry though since Ashville is one of the most Liberal places in NC (next to Chapel Hill) and will never let this stand. That may upset the notion they wish to hold about the American South, but so be it: Propriety trumps Furriners' smug sense of what is wry.

0 Replies
1
Reply Thu 18 Mar, 2010 07:52 pm
@Finn dAbuzz,
Unless I've missed it somewhere, nobody I've read here has used this event to characterize NC, as much as point out that there are social barriers that atheists face that are very real.

If you want to make this about liberal versus conservative, we can go there, but it's not the point of this. Plus, given the politics of those trying to remove this man, I doubt you actually would want to deal with that baggage.

You missed it young Jedi


Please direct me. If it has happened, it certainly has not been the theme of this thread, nor should it be.

You missed it young Jedi


Please direct me. If it has happened, it certainly has not been the theme of this thread, nor should it be.

Even in North Carolina?

Bipo, a proud(?) son of the Old North State, took umbrage (although perhaps he merely wished to distance himself from his redneck fellow citizens).

What, in your opinion, has been the theme of this thread?
0 Replies
1
Reply Wed 24 Mar, 2010 08:15 pm
Ah, but now SOUTH Carolina, on the other hand.....
0 Replies
1
Reply Thu 25 Mar, 2010 01:05 am
@edgarblythe,
I agree. The most vociferous and passionate atheist i know, who is not actually a "professional" militant atheist, is a social and political conservative, and a great admirer of Bush (or at least once was--i've not spoken to him on that subject for a number of years).
0 Replies