Oh god . . . the classic Les Nessman episode was when he had the turkeys released from a helicoper flying over the shopping center . . . i just about busted a gut . . .

That was a great one. I found a clip of Carlson saying he thought turkeys could fly, but that wasn't what I thought was the funniest thing about that episode. The part I liked best was Les Nessman doing the commentary as the turkeys fell from the sky and copying the classic commentary from the Hindenberg ("Oh the humanities").

M*A*S*H was a good show for about the first four seasons. After McLean Stevenson left, however, the show abandoned the witty wordplay and keen satire of its earlier years for puerile punnery and shrill, anachronistic moralizing. By the end, it was nearly unwatchable.


I agree completely. Sadly, when you see the syndicated shows, it's never from the McClean Stevenson era.
2 Replies
1
Reply Thu 18 Feb, 2010 10:00 am
the best part about WKRP 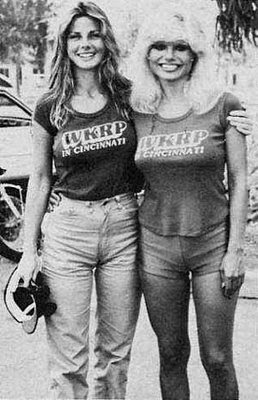 the best part about WKRP

I agree completely. Sadly, when you see the syndicated shows, it's never from the Mclean Stevenson era.

hey, i had to have a crush on at least two straight woman
0 Replies
1
Reply Thu 18 Feb, 2010 02:06 pm
Wow, haha there are so many old shows I've never even heard about!
I gotta make time to at least check out a few episodes of each.. Hmm.

It was filmed in CA. hills near where I grew up. After filming, the production studio would give the scripts to local schools who would use the materials to teach kids and adults who had difficulty reading.
0 Replies
1
Reply Thu 18 Feb, 2010 03:42 pm
@George,
Oh yeah, Taxi was great, and had some great talent . . .

No, seriously . . . Danny de Vito, Christopher Lloyd, Andy Kaufman, Carol Kane . . .
0 Replies
1
Reply Fri 19 Feb, 2010 04:17 am
If you've ever felt the need to channel your inner nerd, you might try "The Big Bang Theory", in its third season now, which actually has a tenured astrophysicist who vets the scripts to make sure the science is right and slips in actual physicists' jokes--in my opinion the funniest current sitcom.
1 Reply
1
Reply Fri 19 Feb, 2010 04:26 am
@RadAndRandom,
Robert Altman's movie is an incredible antiwar satire.

The television show shares the same characters (mostly) but it leans more towards the sentimental side of the emotional scale. Most of the series is well made, funny, sometimes heart breaking, and mostly heart warming. The acting and screen chemistry is what makes the television show so legendary and iconic.

The show can get repetitive if you end up watching the entire series but finding a greatest hit list of the better/best episodes will help you avoid this minor obstacle.
1 Reply
1
Reply Fri 19 Feb, 2010 04:32 am
@RadAndRandom,
RadAndRandom wrote:

Well, you made it sound worth watching, that's for certain, Monterey Jack. Especially with the part about saving the pianist's hand.
I have already checked if my library has them, and it does not, but I know that I can request to borrow them from another library. I might be placed on a waiting list for some time, but it'll be worth the wait, I hope.


Interlibrary loan can be a library patron's bestest friend!

Sure is...although the inter-service football game storyline is distracting;almost as if the studio mogul had tinkered with Altman's script
1 Reply