Man's Magnum Opus. What is the greatest work of art in any medium?

Forums: Art, Literature, Magnum Opus, Society
Email this Topic • Print this Page
1
Reply Mon 15 Feb, 2010 10:59 pm
I'm high on the Bernini and the Goya.
I'd nominate Bernini's piazza except it was never finished per plan, and I liked the plan.
I'll nominate piazza di Campo in Siena, c. 1194/1262, born of an etruscan temple-arena-market complex, then a roman market (fora boaria), and a medieval market.. at the confluence of two hills.

The best article I've seen on it was in italian in the Bell'Italia magazine and gave elaborate sections/plans of it over centuries. Not easy to quote.

There was early bullfighting, perhaps.

The 'nine' is represented in the shell design..

So, a confluenced place that had a design that related to the city.

T0 quote myself quoting Fabiani (somewhere in an old biblio), Fabiani describes a sermon St. Bernard preached in the campo in 1427, chastising women for talking during mass by imitating voices of the animals:
"ca, ca, ca" for the goose;
"cia cia, cia", for the magpie, and
"qua, qua qua" for the frog.

Well, I'll leave this. I'm more interested in how the space works for a city, and how the bull fights and palios have worked out re rivalries.

From memory;
For the moon never beams without bringing me dreams
of the beautiful Annabel lee
And the stars never rise but I see the bright eyes
of the beautiful Annabel Lee
And so all the night tide I lie down by the side
of my darling, my darling, my life and my bride
In her selpuchre there by the sea
in her tomb by the sounding sea.
I learned this one as a boy and, I'll admit the music of it stays with you.

It's etches it's mark indeed, I noticed one work wrong (feel the bright eyes) from memory and when I looked up the text found another I didn't catch (the tomb by the sounding sea).

Pretty good! I used to be obsessed with Poe, and could once even recite The Raven in Portuguese. Which is worth mentioning on this thread, this is one of those poems that doesn't lend itself to mere translation at all, it must be translated through being rewritten by a poet. And Machado de Assis, an able poet in his own right who is widely considered Brazil's greatest literary figure, did a fantastic job of it. I don't know how many people are fluent enough in Portuguese to appreciate it (it's very eloquent and uses archaic language just like the original) so I won't quote it entirely, but I remember you mentioning spending some time in Brazil so in case you can read it here it is:

He does an amazing job of creating poetry with the limitation of following Poe's structure and story line.
0 Replies
1
Reply Tue 16 Feb, 2010 12:01 am
@Merry Andrew,
Merry Andrew wrote:

Glad you like the Sargent painting, Robert. When I worked at the Boston Museum of Fine Arts a number of years ago, I would pass through the room where that painting hangs almost daily. (Incidentally, one of those fantastically large white-and-blue vases that one of the girls is standing next to is still unbroken and, in fact, is on display not far from the paitning.)

I would love to see all these works in person, it's hard to even tell how big the paintings are from the images and from experience I know how much little things like being able to notice more detail can change one's appreciation of art.

For example, I imagine seeing some of these sculptures, especially the large ones, in person is a little like seeing a movie on the big screen instead of a tiny TV.
1 Reply
1
Reply Tue 16 Feb, 2010 12:09 am
@Robert Gentel,
Go in winter, really.


0 Replies
1
Reply Tue 16 Feb, 2010 12:37 am
@Robert Gentel,
My first and probably best trip to italy was after about ten years of no vacation, leaving LA on Feb 29, so I suppose it was a March trip. Most of my time in ital museums has been peaceful, including the accademia in venice (when they opened) and same with the uffizi. Now one can book.

I'm chary about booking, but I suppose I would now.

First time I went to the pinacoteca in siena, we spent hours, staring at the paintings and going back and forth. Next time I made it there, it was some godforsaken tour where they herded you. I despise being herded. Demanded more time seeing (whatsis) painting. They gave in but watched me. I get their concerns, but I am not an art slasher. One can sign up, I take it, for a special tour as a whoosit. I wish I did that in my second time in Siena.

When I went through the museum in Lucca, with no other visitor but me in the whole place, I was accompanied the entire time by a well-suited woman as I passed through the rooms of grizzly portraits (though I can like portraits).
We came to a painting by 'I don't know' of several family members. I liked it, and tried to explain why in my lame-o italian and english to her great italian but not great english. Either she didn't get it or thought I was an imbecile. It was all about the hands..

No.4 just blows my mind. 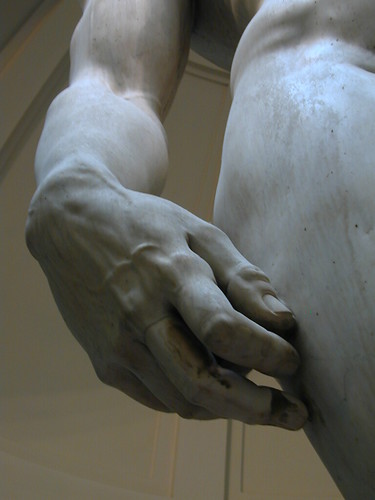 Is that a film, or play only?


Looks very interesting.
2 Replies
2
Reply Tue 16 Feb, 2010 02:37 am
@wandeljw,
I have a truly wonderful print of this Matisse, "Women and Monkeys...(this print makes it look sepia...the reality is purest white and joyful blue)

2 Replies
1
Reply Tue 16 Feb, 2010 02:43 am
Well my current signature reminds me of Meditation XVII by John Donne. It is not just beautiful language but beautiful philosophy and in one line popularized not one, but two, instantly-recognizable quotes in literature: "no man is an island" and "for whom the bell tolls".
1 Reply
2
Reply Tue 16 Feb, 2010 02:48 am
@dlowan,
This is one of many works of art that hav emade me cry.

This is John the Baptist at the National Gallery Washington.

It's in the mediaeval collection.

No photo does it justice, and I have no real idea why I find it so powerful...I think it is the ecstasy of the figure: