Is it your community's custom to save shoveled parking spots?

But here in Austin? You leave something in the street?
Pancho will pull up with his truck and take that ****. Aint no savinnn stuff here that way. No sir.
1 Reply
1
Reply Mon 1 Mar, 2010 11:05 am
@shewolfnm,
shewolfnm wrote:

But here in Austin? You leave something in the street?
Pancho will pull up with his truck and take that ****. Aint no savinnn stuff here that way. No sir.


Agreed. Sometimes I think other parts of the country are downright crazy.

I mean, saving parking spots? Using a lawn chair? And then trashing someone's car when they take your spot? Hard to imagine something more juvenile.

I'm inclined to see it as emblematic of Chicago's (and maybe Boston's, dunno) inherent laziness and sense of personal entitlement: I did some work here, and I expect eternal credit for that work, and I don't intend to ever do any work again. I'm not really flippant about that -- I worked with some astonishingly lazy people in Chicago, and a lot of them would bust your balls if you did any more than the bare minimum required. That trait was about the only thing that seemed to cross all ethnic, gender, and class lines in Chi-town.

I say that fairly regularly, map.

Saving shoveled spots with personal belongings was new to me when I moved here. I chuckled about it but since I didn't (and don't) live in the city, I've never had to deal with finding a place to park that's a reasonable distance from my house/apartment. Side street parking in Chicago is horrid even without the snow. Add a foot, or more, of snow to the problem and it's ridiculous.

I don't think I'd own a car if I lived downtown and had a reasonable way to get to work on public transportation. Not without off-street parking, that is.
0 Replies
2
Reply Mon 1 Mar, 2010 11:32 am
Hey, I lived up North, and in the Midwest.

Gettting a parking spot in the snow is serious ****.

Where I grew up, parking spots in the summer were just as serious.

If you lived near the beach, you had to watch that the goddam bennies from the city didn't take over every square inch of street parking, including blocking your driveway. My BFF's dad, Mr. Baccigopi, would sit in his lawn chair in the middle of his driveway, every day from Memorial to Labor Day, guarding his dominion.
One day we came out of the house and there it was, a brandy new TransAm, with the Firebird on the hood and red ribbons and malocchio horns hanging from the rear view mirror.
This stugots made the mistake of leaving his window cracked enough for a tuna sub with extra onions, and an ice cream cone to be shoved through. 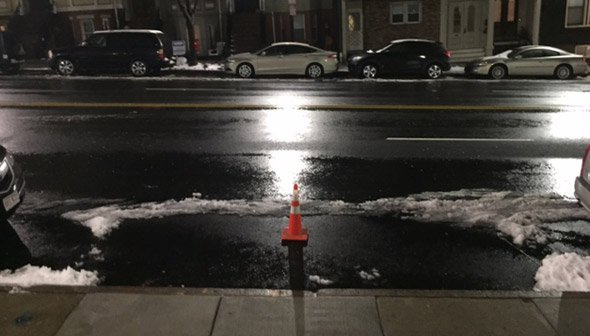 that was in southie, no less...
0 Replies