Movies that make you Cry

Forums: Movies, Film, Films, Tearjerkers
Email this Topic • Print this Page
Reply Tue 8 Dec, 2009 11:42 pm
I am an emotional guy. It's true. Im sure some of my postings show this off. I will confess something to you guys that I don't think I have ever told anyone else.

When I was a senior in High School I started going to the movies alone. Mostly because a good friend was the manager and it cost me nothing. Even for a drink and popcorn it was free. I could come as many nights a week as I wanted I just couldn't sneak in friends. It didn't bother me. Unless the friend was a really good one, I can not stand talking during a movie.

Anyways, so I would go see movies all the time, alone. Became one of my favorite things to do, even to this day. Helps me unwind, relax and just generally fits in with the "loner" profile I have at times. I discovered at these sessions that many times, the most movies will get to a point where there is a touching scene. Even the over dramatic, horribly gory B flick horror movies have a a touching scene, even if it was sappy enough to trap a swarm of flies. I started to realize that at most of, not all of, these sappy/touching scenes I would get a bit teary eye'd. A first I pawned it off on a yawn I had done. Or it was a sneeze I didn't remember, or maybe popcorn salt got in my eye. But it would repeat it self in every movie which had a part that just touched my heart string in a certain way.

Then I watched "Bridge to teribithia" one day in Iraq and the scene hit that just rocked me like a little boy seeing his dog die. I had tears pouring down my face like I had just eaten a habenjero pepper sandwich. I won't tell you the scene in which I speak of, for fear that someone who reads this hasn't seen the movie, I don't want to ruin it. But it just caught me off guard and I realized that wow im a big baby when it comes to sad sappy movies. Let an animal get hurt or killed in a movie, I lose it. Let there be a touching scene between a father and son, or even worse a father and daughter and I become a fountain.

The death of a child is a little too much for me.

Let an animal get hurt or killed in a movie, I lose it.

...or a child loses a beloved pet (in this case, his dog), or it's taken away. I didn't just quietly sniff & cry at the moment he realized his dog was actually gone forever, I blubbered loudly. (& got hiccups! Very embarrassing!)
Wonderful film, BTW. 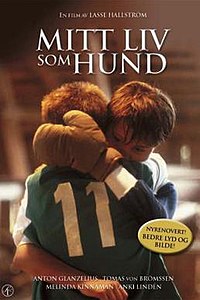 MEDIUM SHOT "" George and Clarence approach the tree from which the "Bailey Park" sign once hung. Now it is just outside a cemetery, with graves where the houses used to be.

CLARENCE: Are you sure this is Bailey Park?

GEORGE: Oh, I'm not sure of anything anymore. All I know is this should be Bailey Park. But where are the houses?

The two walk into the cemetery.

CLARENCE (as they go): You weren't here to build them.

CLOSE MOVING SHOT "" George wandering like a lost soul among the tombstones, Clarence trotting at his heels. Again George stops to stare with frightened eyes at:

CLOSE SHOT "" a tombstone. Upon it is engraved a name, Harry Bailey. Feverishly George scrapes away the snow covering the rest of the inscription, and we read:
IN MEMORY OF OUR BELOVED SON "" HARRY BAILEY "" 1911-1919.

CLARENCE: Your brother, Harry Bailey, broke through the ice and was drowned at the age of nine.

GEORGE: That's a lie! Harry Bailey went to war! He got the Congressional Medal of Honor! He saved the lives of every man on that transport.

CLARENCE (sadly): Every man on that transport died. Harry wasn't there to save them because you weren't there to save Harry. You see, George, you really had a wonderful life. Don't you see what a mistake it would be to throw it away?

0 Replies
1
Reply Wed 9 Dec, 2009 06:01 pm
There are movies that genuinely make me cry, and others where I cry and feel at the same time a bit angered, because I sense that they're extorting the tears out of me.

2 Replies
1
Reply Wed 9 Dec, 2009 06:06 pm
@fbaezer,
I can see how you felt artificially manipulated by Saving Private Ryan and Titanic. They're constructed on the melodramatic/formulaic/Oscar baity side, where I can imagine the director and/or screenwriter says out loud before filming this scene: queue audience tears ... now.
1 Reply
1
Reply Wed 9 Dec, 2009 06:40 pm
@fbaezer,
I like your distinction between genuine tears and extorted tears, fbaezer. I get so pissed off with myself when extorted tears are extracted out of me & I really should know better!

I think I cried watching Tosca, a film about aged opera singers - decisively panned all to hell here -