You got to be kidding me the cult is fairly large as cults go and most members are money making slaves to the cult in fact if not in name. 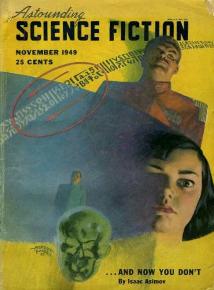 "Who Goes There" is a classic and he wrote some good serious sci-fi under the pseudonym Don A. Stuart, a play on words of his first wife's name Donna A. Stuart. He took it to publish himself in Astounding. Astounding. He was a character. I've related the story before, but I got stuck in an elevator and the WesterCon sci-fi convention, with Anthony Boucher
and Richard Matheson. He broke out a flask of good cognac and we sipped, waiting for the elevator to be fixed -- it was about ten minutes to half-an-hour but by that time I was nearly choking on his cigar smoke (he was a chain smoker). He believed that Dianetics was going to supplant Fruedian psychology and win L. Ron Hubbard the Nobel Prize. Astounding!

There may have been a core of truth in the "discovery," used by, among others, the inventors of Bio Feedback (which does work).

"Who Goes There" is an absorbing read, the first to approach aliens who could morph into many forms of life and now exploited in movie after movie, TV series after TV series, mostly as a plot gimmick.

They don't have headquarter like the LA building just for celebrities, although they have a "Celebrity Center."

It's a pyramid scheme of money making where members bring in new members but spiritually it's more like a Ponzi scheme. It's results are suppose to be like Bio Feedback, but extremely more expensive.

This is supposed to be news?

Remember, not everyone on this forum is as, er.................mature as we are. They may not understand the background of this nonsense!


And so this thread is to be lauded for its educational value?

Thus far, there has not been a single defender of Scientology participating.

I guess there's nothing all that wrong with a bunch of people sharing their thoughts and knowledge tidbits about the sun being the center of the solar system either.
1 Reply
1
Reply Fri 7 Aug, 2009 06:57 pm
@Finn dAbuzz,
A co-worker of mine many years ago was trying to get others co-workers involved with the scientology cult and I printed out a numbers of copies of the fisher papers. and share them around. In any case I think that was the name of the paper listing the secret of the cult and it levels.

The first e-meter was suppose to had been two tin cans hook to an ohm meter that you held in your hands.

Note the phony baloney cross on the top which, I guess, is additional confirmation to the US government that they are a bonafide religion (which they aren't).

I thought they gained church status with the IRS after Hubbard's death.
2 Replies
1
Reply Sat 8 Aug, 2009 02:21 am
@DrewDad,
It is my understanding that the cult went the religion/church route mainly because of problems with the FDA and their health claims for the e-meter and not so must because of the tax situation.

You was the one I belief that post on this thread first concerning bio-feedback at least I was not the one to do so!

Second the e-meters used in sessions to clear people in scientology is indeed a simple ohm meter and little else and the church sell them for a way over price mark-ups and they are consider a religion object so the FDA can not question them under the medical devices laws.

Now what is your problem with the above information?
1 Reply
1
Reply Sat 8 Aug, 2009 10:10 am
@BillRM,
No problem with that, but you linked it to the "e meter," which is about as different as a giraffe from a aardvark -- the e meter gimmick is a snake oil salesman trick to get people to pay over $ 400.00 for the sessions to "cure" them. It's in trouble also all over the world with laws allowing it as a "religious device." It's a marketing device. Then it gets into training those who have spent thousands of dollars for the bogus treatments to go out an recruit other suckers.

If the laws were correct and in the public interest, these jokers would all be in jail as quacks.

Are Muslims Tricked By Their Own Religion? - Question by bulmabriefs144
Who is more fair and ballanced, Fox or CNN? - Discussion by reasoning logic
Should i have sex with my best friend's dad or not? - Question by sherine9gudda
I need help with a lie. - Question by kickycan
Japanese diving class fake reality - Discussion by rosborne979
Copyright © 2022 MadLab, LLC :: Terms of Service :: Privacy Policy :: Page generated in 0.03 seconds on 09/24/2022 at 12:54:19
▲ ▼