Where did cats come from BEFORE they were domesticated?

Forums: Cats, Domestication
Email this Topic • Print this Page
Reply Sun 21 Jun, 2009 12:26 am
I want to know where cats came from before they were domesticated in Egypt, or Cyru 9,000 years ago. But I just can't seem to find the answer to it so i was wondering for if anyone can help me find this information. Thanks

purr
0 Replies
1
Reply Sun 21 Jun, 2009 02:59 am
@skylert83,
First looking at my bed cover with well feed sleeping cats I am not sure if we domesticated cats or the other way around!

In any case see below.

Until recently the cat was commonly believed to have been domesticated in ancient Egypt, where it was a cult animal.[9] However, in 2004, the earliest known location of cat domestication was discovered to be ancient Cyprus, and a subsequent study in 2007 found that the lines of descent of all house cats probably run through as few as five self-domesticating African Wildcats (Felis silvestris lybica) circa 8000 BC, in the Near East.[4]


Scientific classification
The domestic cat was first classified as Felis catus by Carolus Linnaeus in the tenth edition of his Systema Naturae of 1758.[2][135] However, some contemporary studies have revealed evidence that domestic cats may be conspecific with (belong to the same species as) the Wildcat,[135] classified as Felis silvestris by Schreber in 1777.[136] This has resulted in mixed usage of the terms. The domestic cat is sometimes considered to be a subspecies, F. s. catus, of the species F. silvestris.[4] Wildcats have also been referred to as various subspecies of F. catus,[136] but in 2003, Opinion 2027 of the ICZN fixed the name for Wildcats as F. silvestris.[137] The predominant usage for the domestic cat remains to be F. catus, treating it as a separate species and following the convention of using the earliest (the senior) synonym proposed.

Johann Christian Polycarp Erxleben classified the domesticated cat as Felis domesticus in his Anfangsgründe der Naturlehre and Systema regni animalis of 1777. This name, and its variants Felis catus domesticus and Felis silvestris domesticus, are often seen, but they are not valid scientific names under the rules of the International Code of Zoological Nomenclature

Five subspecies of wildcat are distributed across the Old World. They are known as the European wildcat, the Near Eastern wildcat, the Southern African wildcat, the Central Asian wildcat and the Chinese desert cat. Their patterns of DNA fall into five clusters. The DNA of all house cats and fancy cats falls within the Near Eastern wildcat cluster, making clear that this subspecies is their ancestor, Dr. Driscoll and his colleagues said in a report published Thursday on the Web site of the journal Science.

The Near Eastern Wildcat...

Cats lived all over the mid-east. Probably anywhere is was warm enough to survive the elements.

What they did was hunt like any other small carnivorous animal and as they still do when they do not have a human to feed them or if they are bore.

Beyond that what are you driving at?

I want to know where cats came from before they were domesticated in Egypt, or Cyru 9,000 years ago. But I just can't seem to find the answer to it so i was wondering for if anyone can help me find this information. Thanks

Cats, dogs, civets, hyenas, raccoons, and bears have a common ancestor in small, extinct meat-eating animals called Miacidae, which lived about 40,000,000 years ago. Cats seem to have developed rather suddenly from the civet branch of the carnivore group of animals.

It is believed that cats were first domesticated in northern Africa. Egyptian carvings made more than 4,500 years ago depict cats as domestic animals. The cat was a sacred animal in Egypt, associated with the goddess Pasht, or Bast. Many mummies of Egyptian cats have been found.

Phoenician sailors introduced cats into Europe, and the African cats interbred with European wildcats. From Egypt cats also spread east to India, China, and Japan. Exactly how and when cats were introduced into the New World is not known.

Cats were regarded as the servants, or familiars, of witches in early days. Satan was sometimes thought to take the form of a black cat. Cats of different colors are considered lucky or unlucky by superstitious people.

At the entrance to many stores, restaurants, and even private homes in Japan you may see a small ceramic cat with one raised paw. Called a Maneki Neko (Beckoning Cat), these ceramic cats represent a breed of cat, the Japanese bobtail. This breed of cat has existed in Japan for centuries. Many Japanese consider this cat to be lucky.

This slender, medium-sized cat has a very short, rigid tail covered in bushy fur. This breed may have many colors of fur, but the traditional “good luck” color for a Japanese bobtail is white with patches of red and black.

Cats make up the family Felidae. The domestic cat is Felis catus.

Caracal, a species of lynx native to Africa and the warmer parts of Asia. It is reddish-brown with white underparts, and its ears are tufted with… See more »

Cheetah, or Hunting Leopard, an animal of the cat family. Once abundant from Israel eastwards through northern India, the cheetah is now found in the… See more »

.....the house cat lineage is far older. Ancestors of domestic cats are now thought to have broken away from their wild relatives and started living with humans as early as 130,000 years ago. The researchers focused on DNA in the mitochondria, the "power plants" of cells which supply energy and have their own genetic material.

> though personally I think all cats share this true nature (from later in same article)...

"The Felidae family is well known as a successful predator - very deadly, very ferocious, very threatening to all species including humankind," 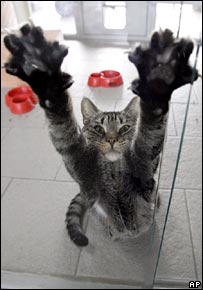