Forums: Tv, Comedy, Slapstick Comedian, Comedy Short Films
Email this Topic • Print this Page
Reply Wed 18 Feb, 2009 04:28 pm
I recall catching comedy short films (much like the 3 stooges) on early Sunday mornings back in the early 60's and for the life of me can't recall the comedians name? His clips ran about 20 minutes and were of a slapstick nature? One clip featured him trying to impress his girl friend's dad (both of whom were health nuts) by wearing ballons under his clothing to give an impression of being in shape? Too funny as they burst one by one exposing his charade....does anyone know who this guy was? Thanks!
Type: Question • Score: 8 • Views: 9,575 • Replies: 12
No top replies
1
Reply Wed 18 Feb, 2009 04:36 pm
@J5,
Could it be Don Beddoe?
0 Replies
1
Reply Wed 18 Feb, 2009 04:39 pm
It might have been Buster Keaton . . . 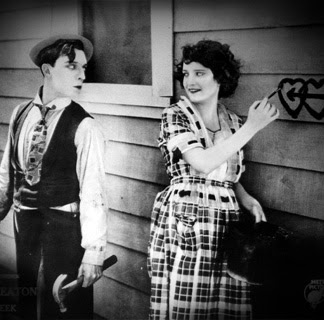 (Those glasses were the major part of Lloyd's "trademark" appearance.)

Here's Charly Chase in what is probably the second reel of a 1927 two-reel comedy called "The Way of All Pants." Premise: a wife buys a new pair of pants as a present for her husband. Chase, the sales clerk, models the pants for the wife and delivers them to her home.

0 Replies
1
Reply Fri 11 Mar, 2011 01:16 pm
The guy I remember was named Andy. He was balding, wore wire rim glasses, and had a bushy mustache. He played both married and unmarried men. I can remember many of the episodes but not his last name. Some of the episodes:

Andy's home is inundated with hobos because his wife got caught up in "Be Kind to Nomads Month."

Andy and a rival vie to be the first to deliver a white sidewall tire to the woman in their triangle in order to win her hand. Andy bought his tire; his rival stole his from the local lawman and gets caught. Andy wins the girl.

Andy goes camping in a hunting area and wonders about the "bees" buzzing around until he swings his cast iron skillet at them and intercepts a live round.

Andy is lonely and marries a woman who advertizes her availability in egg cartons. She turns out to be a shrew with an existing, very annoying child.

And in response to another post, yes, Buster Keaton did make some talkie shorts in the early days. I saw them on TV along with Andy "X" and the Three Stooges.
1 Reply
2
Reply Fri 16 Sep, 2011 05:52 pm
@tweedye,
His name was Andy Clyde and he had worked with Mack Sennett in 1920s silents and 1930s talkies before moving to Columbia where he made countless shorts in the 1940s. The glasses and paintbrush moustache were his trademark "Pop Martin" persona.
0 Replies
1
Reply Fri 16 Sep, 2011 08:25 pm
Andy Clyde sounds very good. He also played a role on The Real McCoys.
0 Replies
1
Reply Sat 17 Sep, 2011 02:14 am
@J5,
I have no idea about morning TV,
but might u be thinking of Red Skelton ?
0 Replies