Questionable Content has been one of my favorites for a few years. It's kind of more my generation, and at times the humor seems pretty insular to a certain cultural demographic, but I love the over all story.

The art starts out pretty bad, but after several years, the artist Jeff Jacques has got significantly better.

If your curious about a comic which is basically a paperback romance about urban 20 somethings littered with nerd jokes and obscure music references, I highly suggest it.

But your should start from the beginning...
http://www.questionablecontent.net/archive.php

He updates 5 times a week and there are as of today 1341 comics (full panel).

T
K
O
1 Reply
1
Reply Wed 18 Feb, 2009 06:44 am
@Diest TKO,
I read a bunch last night -- Faye's character may continue to evolve but for that first swath I found her really annoying, and annoying that she's supposed to be cute and attractive. (She's very freshman-in-college when it seems like she's supposed to be older than that. Many girls go through the drunk-with-female-power phase, most grow out of it pretty quick.)

Struck me as both young (in the immature sense, not the generational sense -- I got most of the allusions) and a very male-perspective strip. (Every cute girl he encounters has a crush on him but is passive-aggressive and annoying about it... I'm sure that's how life seems to a lot of young men, but less interesting for anyone else.)

All of that said, as I read more it reminded me most of "Badgers and Other Animals," a strip that started in the campus newspaper when I was a freshman and continued for the next 4-5 years -- I was totally addicted to it even though the quality was... questionable. I think if you come to it with zero/ neutral expectations it might grab you more than if you come to it with high expectations.
2 Replies
1
Reply Wed 18 Feb, 2009 06:48 am
@sozobe,
sozobe wrote:

All of that said, as I read more it reminded me most of "Badgers and Other Animals," a strip that started in the campus newspaper when I was a freshman and continued for the next 4-5 years -- I was totally addicted to it even though the quality was... questionable.


Hadn't thought of it in forever, just looked it up -- the guy who did it was Todd Hanson, who went on to be one of the main Onion guys. So he had a bright future, but the comic wasn't that great. (Also the strip was a bit earlier than I remembered, 1987-1992.)
0 Replies
1
Reply Wed 18 Feb, 2009 09:57 am
@sozobe,
Interesting outlook on Faye. See I never thought her to be cute/attractive character as much as the mysterious and yet abrasive character that you give extra tolerance to because you understand where they are coming from (assuming you've read far enough). I think Dora is the cute/attractive one.

I don't see Marten as passive aggressive as much. I after 1340 panels, he has never really had an agenda as much as he's simply gone where the wind blows. He's more of a recessive male than a passive aggressive male. If he was PA, we'd see more panels with him complaining about how he's treated, but we don't.

I totally agree about the male vantage point observation. Especially in the beginning of the series. I thing JJ was trying to figure out what he wanted to do. I think at first it was all about liking Marten: Liking he was nice, admiring his elite taste in music, laughing at the witty nerd jokes, and envying his female circumstances. I enjoy this male perspective personally. There are plenty of roles/views of the male protagonist out there. No single one will please everyone. At least this one is different than many offered elsewhere in media jock culture.

What has developed over the years is a story where Marten may still be the lead role, but the story larger than "which girl will he choose?" Hanalore, a character not introduced until way later, has become one of the most popular characters because she suffers from OCD and has extreme social disorders. Fans really like how a large part of the story has been devoted to her development and her struggle to become more social and make friends. Lots of times the story exists where Marten is not present. I don't think he's the center piece as much anymore.

Unclear sentence -- I meant that the cute girls are passive-aggressive and annoying, not that Marten is. He's just plain passive.

I'll keep reading though! I'm about a year in so far (as of last night). Still don't like Faye much.

(I think the whole "giving extra tolerance because you understand where they're coming from" thing is overrated too btw -- I know so many guys who have been jerked around by "damaged" women with sob stories, while I also know so many other women who have bona fide sob stories but don't feel the need to jerk anyone around because of it...)
2 Replies
1
Reply Wed 18 Feb, 2009 10:52 am
@sozobe,
Not a year... I'm on 117.
0 Replies
1
Reply Wed 18 Feb, 2009 10:54 am
@sozobe,
Good point. I guess the point isn't to have perfect characters though. That would be boring.

I won't spoil anything.

I read the whole damn thing and it took more time than I actually have.

It got better after 117. Main thing that got better was that shortly after that, Faye stopped being "cute attractive object of affections" (which she was for that first stretch) and started being "dangerously messed up."

I don't mean the sob-story revelation, that seemed forced. (I think the cartoonist was going in a different direction with the whole "don't touch me" thing and then got a little scared about implications.) Plus Faye tells a story about her dad early on that doesn't jibe with the later revelation.

I just mean that everyone in the strip started to view her as dangerously messed up and someone who needed to work on her issues, which I preferred to "aw how cute."

- FRIENDS FRIENDS FRIENDS FRIENDS. So derivative! Maybe subconscious. Alluded to at least once. Everyone living in the same house, long-simmering but unconsummated romance, coffeehouse as home away from home. Raven is Phoebe all the way. Steve is Joey. Other characters are a bit more mix and match. (Marten is sort of the lovechild of Ross and Chandler without the corporateness and with more esoteric taste in music.)

- Predictable plotlines BUT a good job of pulling you in anyway.

- I read the most recent strip first, then the archives (the order of your links). The artistic style was so different, and Sven wasn't around at the beginning, so as I was piecing together characters etc at the beginning, I thought that the characters in the "I cheated" strip were Marten and Faye, which meant that Marten and Faye got together and Marten cheated on her, after all that history. I was happy to get up to the present and find out that it was actually Sven.

- I've mentioned "Friends," "Dykes to Watch Out For," etc., but the other obvious analogue/ forerunner/source is "Doonesbury." The characters were all young when it started out.

In sum, I don't think it's GREAT but it was entertaining and grabby enough that now I'm gonna have to see what happens with them from now on, sigh.
2 Replies
1
Reply Thu 19 Feb, 2009 04:47 pm
@sozobe,
sozobe wrote:

OK, Diest, you are in major trouble!


Wow, so you read all 1340+ panels? Excellent! It's addictive stuff. What can I say? People love paperbacks, and I think the attraction to QC is something similar.

I got you addicted. LOL.

OMG! I totally did not see how derivative it is. The whole "my dad killed himself" is a total rip-off of Phoebe's mom, too.

And the gay dad is a rip-off of Chandler.

Yeh the art got better but now it looks like its a template, like the old gel cells. As far as the humor, I guess I am out of the target audience.


I was thinking the same thing.

I was able to concentrate on what was being said in the early one's, I skipped around, going up, and got less and less interested. Too busy.

Here's the last one I happened across: 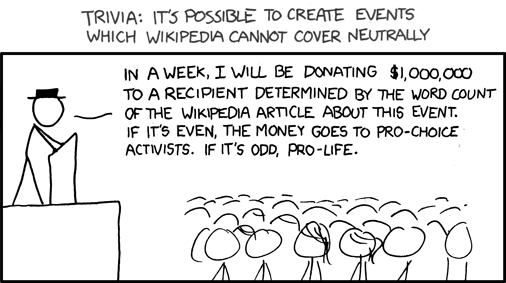 I don't use this site, but the concept is neat. It's tracking a bunch of web comics and lets users vote if it is funny today, to save others the time:

0 Replies
1
Reply Mon 25 Oct, 2010 12:05 am
I feel compelled to support my favorite webcomic so I preordered my copy from Barnes and Noble.

You've been asking for it for years, and now it's finally a reality! The very first print collection of Questionable Content, that is. Not approval from your parents. Sorry. We can't help with that. Unless they're QC fans? Then...then you could buy them this book?

ANYWAY WE ARE GETTING OFF TRACK

QC Volume 1 collects the first 300 strips in dazzling full color, with commentary on each strip, a bonus minicomic in the back, and MORE!

http://tinyurl.com/38eufsn
1 Reply
1
Reply Thu 11 Nov, 2010 09:03 pm
@tsarstepan,
Watch the artist live (as in RIGHT NOW) as he draws his work of comic art!
http://www.ustream.tv/channel/qc-show
1 Reply
1
Reply Wed 24 Nov, 2010 06:17 pm
@tsarstepan,
The great Jeph Jacques is pulling off a preThanksgiving drawing session live right now!
http://justin.tv/jephjacques
Be there! Or be octagonal baby!
1 Reply
2
Reply Wed 24 Nov, 2010 08:33 pm
@tsarstepan,
I thought the timing of the breakup is interesting. He just re-did the old stuff for his book and I think he's angling to get Martin and Faye together, finally.
1 Reply