The art of caricature

Forums: Drawing, Caricature, Art, Portraits
Email this Topic • Print this Page
Reply Mon 16 Feb, 2009 06:54 pm
Last Friday Mo and I went on a dinner date to a neighborhood restaurant. I got up to grab a bottle of Tabasco and walked by a man drawing a caricature of some people at another table. We spoke briefly about his work and when I got back to the table I pointed him out to Mo who, of course, wanted to go take a look.

Mo ended up sitting down to watch the man draw for a bit and when he came back to the table he begged me to let the man draw a picture of him. I noted that the man approached the people he had drawn and sold them the drawing, so I asked how much it would cost. The amount was reasonable so I had Mo's caricature portrait made.

Mo adores this portrait and I have to admit, it's a fun thing to have (he had gleaned from Mo that Mo loves soldiers so he drew him in a tank).


I especially loved watching it be made; I've always envied people who could draw with such quick, sure lines -- courtroom artist, editorial cartoonists, caricature artists.

Have you ever had a caricature portrait drawn?

she was volunteering serving coffee to birders at a local park and he was there doing some work with the local tv station, he did a quick sketch, wow just seeing that this 17 years ago 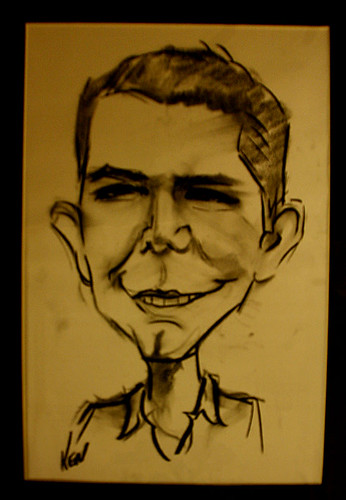 0 Replies
1
Reply Tue 17 Feb, 2009 08:18 am
the profile of hitchcock reminds me of the paper cut profiles they make, we had some done when tai and i were young, i'll scan them later and post them here

did you see my thread from the other day on paper cut art, it was poorly received and quickly buried, here's the link if you missed it
http://able2know.org/topic/129270-1

They were done at Niagara Falls in the tourist area. Fellow sat you in front of a white screen and shone a bright light at you to get your shadow profile and then with a sheet of shiny (coated) black paper cut out the silhouette free-hand with scissors in one go. Has anybody seen that sort of thing at arcades or touristy spots lately? Maybe it's a dying art now that you can do so much with computers.
0 Replies
1
Reply Tue 17 Feb, 2009 08:51 am
@mac11,
mac11 wrote:

I had my caricature drawn in Jackson Square in New Orleans years ago. It was really ugly. I'm sure I trashed it immediately, but the image is burned in my head.


Yeah, there should be a spark of "you" there but it shouldn't be ugly. Funny this topic should have come up now. Yesterday we recycled caricatures of our sons that had been kicking around for years. Don't know why we kept them -- we couldn't tell who was who, they were so badly done.
0 Replies
1
Reply Tue 17 Feb, 2009 12:03 pm
Oh I love those silhouettes! Thank you for posting them.

My mom had ours done when we were kids but I don't think she has them anymore.

I've never had mine done, mac, since I'm sure I would have the same reaction you did. I can't stand pictures of myself in any form.

The one of Mo is very stylized but hints at his actual self. He adores it though. I think I'll stick it in a frame and let him hang it in his room.
0 Replies