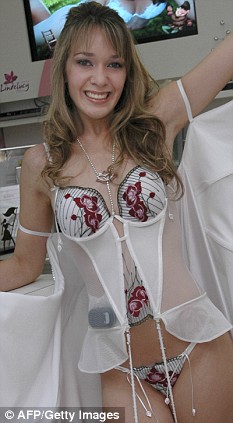 Controversial: Critics have said underwear featuring a tracking system is the high-tech equivalent of a chastity belt

Feminists around the world have reacted with horror to a new line of lingerie that comes equipped with a GPS tracking system.

The 'find me if you can' range of underwear has been described as a modern-day, high-tech chastity belt.

'It is outrageous to think that men can buy this, programme it and give it to their partners and then monitor them,' said Claudia Burghart, leader of a Berlin feminist group.

'It is nothing more than a chastity belt for insecure men.'
Lingerie maker Lucia Lorio of Brazil says her design targets the 'modern, techno-savvy woman'.

The lingerie combination set consists of lace bodice, bikini bottom and faux pearl collar, with the GPS device nestled in the see-through part of the bodice next to the waist.

'This collection... is a wink to women and a challenge to men because, even if she gives him the password to her GPS, she can always turn it off,' Lorio said.

'It's not a modern chastity belt. Some men think they can keep tabs on their girlfriends with it, but they're wrong,' she added.
http://www.dailymail.co.uk/news/worldnews/article-1082707/Outrage-chastity-belt-lingerie-fitted-GPS-tracking-system.html
Type: Discussion • Score: 6 • Views: 6,713 • Replies: 16
Topic Closed
No top replies
1
Tue 4 Nov, 2008 12:20 pm
@Foxfyre,
Of course, she can always choose not to wear the lingerie, right? Or better yet, take it to a hotel and leave it near a room. Then sit back and watch the fireworks when he tracks it down.

It really is designed for the insecure male.

I don't think so. At least it is not designed for me. I would look terrible in that.

But hey girls, I'm not seeing the outrage that is supposed to be triggered by this new....um......garment. Not offensive at all?
1 Reply
1
Tue 4 Nov, 2008 01:05 pm
How is a man to ascertain the woman doesn't take off the device in the most critical moments? I'm offended it isn't a chip implant under her skin! I'm offended it isn't paired with an electroshock device to discipline her when needed!
1 Reply
1
Tue 4 Nov, 2008 01:06 pm
@Foxfyre,
Well, if it weren't for the gps my wife attached to all my stuff, I'd come over and eliminate all the speculation for you ladies. But alas, Tam would know just where I went and unleash the wild dogs on me upon my return. So you will have to be content with speculation.

I could have a lot of fun with this. Those panties would get moved around more than that traveling lawn gnome.


Exactly how many times did you see "Stepford Wives"?

Has anybody seen the remake of "The Stepford Wives?" Quite different from the original.