Are we at the height of postmodernism?

Forums: Art, Philosophy, Culture, Irony, Postmodern
Email this Topic • Print this Page
1
Reply Thu 19 Mar, 2009 07:28 pm
Hello,
I have some more questions, please.
In the face of postmodernism, what can criticism do?
Does pomo render criticism useless?
Analysis of postmodern artworks seems to be limited to simply explaining that they are postmodern.
Should we treat postmodern works with special aesthetics standards of judgement/receptivity?

Shapeless, do you think you could think of a quintessential postmodern musical work? One that exemplifies the most postmodern characteristics?

pq x
2 Replies
1
Reply Thu 19 Mar, 2009 07:54 pm
Oh, and an interesting (?) point I just thought of-
If the paradox of postmodernism (a rejection of the structure of the institution, yet the formation of a new kind of same because they didn't actually scrap the institution) is it's failing then I wonder what difference the internet and the liberation of knowledge will make?
Myspace music culture and all that.

Sorry I think I could have explained that better but I'm really really tired.
2 Replies
0
Reply Thu 19 Mar, 2009 09:14 pm
@The Pentacle Queen,
Really, Pent, that may have all made sense, but get a grip.

are you working to some sort of pinpoint of smart?

There are zillions paying no attention except for cursory reading about postmodernism.

are you working to some sort of pinpoint of smart?

Shapeless, do you think you could think of a quintessential postmodern musical work? One that exemplifies the most postmodern characteristics?

Hmm. It's a difficult question to answer without repeating my earlier belief that postmodernism is less a new phenomenon than an extension of modernism, so none of the works that immediately come to mind necessarily exemplify a technique or feature that hadn't been done before. I'll add another personal caveat that what makes something postmodernist (or modernist, for that matter), in my opinion, has less to do with internal features of artworks themselves than with they way they are interpreted and evaluated. So in that sense, the works I consider quintessentially postmodernist are only so because of what they have come to stand for rather than what the creator may have intended.

That said, here are a few musical works (specifically classical music, the repertory I'm most comfortable speaking about) I think exemplify postmodernist values (not that I'm the first person to describe them as such):

Berio: Sinfonia
- the heavy use of musical quotations is nothing new (the most immediate precedents are Poulenc, Ives, and Mahler; more distantly, Brahms and maybe Schumann; one can trace the practice all the way back to Josquin at least), but Sinfonia's quotations are often interpreted as a commentary on history and an example of artists' new perception of it. Most of the other precedents I mentioned quote other pieces with the belief that those pieces have specific places in a chronological, progressive history. When Brahms quotes Bach in his 4th Symphony, for example, historians interpret that as Brahms's attempt to draw a line of historical succession from Bach through Beethoven to himself. It's a musical statement about tradition and composers' obligations to it. Berio's quotations, by contrast, are not interpreted that way. The quotations have no sense of chronology. Quotes from Mahler jostle with Beethoven, Ravel, Stockhausen, Berlioz, etc. It's the kind of musical collage that could only be written by a composer who grew up in the age of recordings, which made music from all times, all places, and all genres equally available and, as a result, "historically equivalent." That makes Sinfonia a quintessential example of the postmodernist belief that the hierarchies of tradition have been dissolved or rendered obsolete.
- The pervasive quotations are also interpreted as a statement about the futility of originality, which is supposed to be another feature of postmodernism. It is as if Berio is recycling sound bytes from the past because there is nothing new left to say. Nor does he seem terribly bothered by that fact--also quintessentially postmodernist.
- The second movement, "O King" (which was originally an independent piece but later incorporated into Sinfonia), is an homage to Martin Luther King and, to that extent, is representative of the politics of the early postmodernists: a general sense of equality inspired by the Civil Rights Movement (among other things), transmuted into Leftist politics. It's almost too fitting that Sinfonia was composed in the turbulent year of 1968.

Crumb: Ancient Voices of Children
- The piece is representative of a certain moment in music history when composers felt it was time to "start over"--sort of the artistic equivalent of a "paradigm shift" in science. The piece is a setting of poems by Garcia Lorca, and each of the texts evokes ancient, primitive, and generally mystical rituals as if to reject modern, Western notions of progress, newness, etc. Hence the piece's reference to ancient times and to children, both of which are common symbols of timelessness and innocence uncorrupted by modernity.
- The music matches this mood by rejecting any sense of progression or teleology. You don't get the sense that the piece's moments grow out of earlier moments. The sequence of events in the piece, and in most of Crumb's music, could almost be considered arbitrary. To match the imagery of children, the instrumentation even includes a toy piano.
- The piece also contains quotations and allusions to other works.
- The score, like all of Crumb's scores, is unconventionally notated. It still uses traditional five-line staffs, but in more pictorial or symbolic ways. Here's an example that is not taken from Ancient Voices of Children but is still representative: 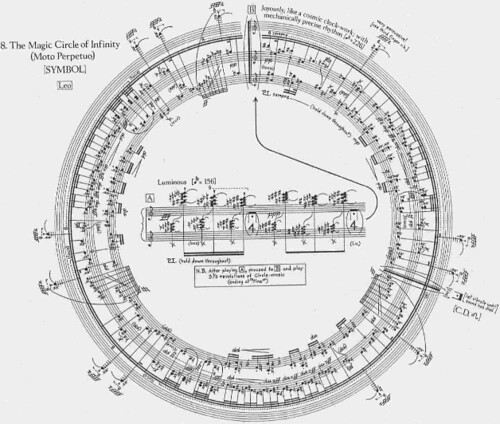 It's another means of searching for new "paradigms," arguably, and in this particular case the circle also represents a rejection of teleology. No end, no beginning, yada yada yada.

More soon, I hope...
0 Replies
1
Reply Fri 20 Mar, 2009 06:39 pm
I'm more for everything "after modern" defining modern as as far as it goes and beyond which it can't be gone. The stuff that is done for the sake of doing it because it is a job with a certain status and a built in conservative bureaucracy the members of which couldn't possibly do anything else without fracturing their ego.

Characterised by novel rearrangements of the already known rather than probing the unknown and by a regulation determined by "experts" and a claque of hangers on. From a Buick 6 to the electric clog.

So we are not at the height of Pomo. We are at the beginning. Unless crazy has peaked too which I am inclined to doubt.
0 Replies
1
Reply Fri 20 Mar, 2009 06:43 pm
i prefer to languish in the depths of pre-antiquity
0 Replies
1
Reply Fri 20 Mar, 2009 06:48 pm
Cuisine after double steak pudding, double chips, double mushy peas and gravy with double white bread and butter and a pot of stewed and well sweetened tea served up by a sweaty waitress with nothing on under her smock in the back of a fish and chip shop after a six pints night in the pub.

There's nowhere to go after that except a load of bullshit. And the heart clinic.

Shapeless-
Does the characteristics of Berio's sinfonia render it resistant to a certain interpretation?
3 Replies