Forums: Science, Space, Astronomy, Planets
Email this Topic • Print this Page
Reply Mon 15 Sep, 2008 06:27 pm
We have been scouting out new planets for a few years now. First we started measuring a sun's 'wobble' to infer the mass and distance of it's planet(s). Before now we've never actually gotten a clear, direct image of an extra-solar planet.

I imagine that we'll (the we that is the Earthly Scientific Community) make more complex and exciting discoveries more frequently.

The BBC has a nice cache of these discoveries. 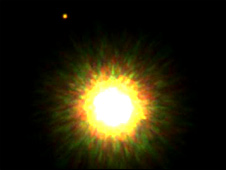 Location: in Scorpius Association
Mass: 8 Jupiters
Sun Type: sol-like, but younger
Distance from it's sun: WAY out there
Surface Temp: 1,500C
Distance from us: 500 light-years

Think extra-solar system life will be found in our lifetimes?

The universe is probably teaming with life.

Most likely we will not see any of it in our lifetimes.

If it shows up here:
that 's not a good thing.
Remember what happened to the Indians
after Columbus arrived.
1 Reply
2
Reply Mon 15 Sep, 2008 07:57 pm
@OmSigDAVID,
Good point. And what happened here when the hypothetical comet arrived bringing seeds of life - if that's how it all began, it changed everything for ever.
1 Reply
1
Reply Tue 16 Sep, 2008 04:23 am
@littlek,
Well, I'm thinking of alien bacteria or the like. I think finding that -- a cell on another world -- I think that would change our world. And I don't mean in an Andromeda Strain kind of way, more that it would really inspire people,, to know that we're not alone out there. I don't expect little green men, but a microscopic something on Europa or some place like that? That would be astounding.
0 Replies
1
Reply Tue 16 Sep, 2008 04:38 am
littlek: really cool picture. thanks for posting.

jespah: finding extraterrestrial life would sound the death knell for biblical literalism i think, which would be a good thing as far as i'm concerned.
0 Replies
1
Reply Tue 16 Sep, 2008 12:37 pm
@jespah,
no

but probably martian microbes
0 Replies
1
Reply Tue 17 Aug, 2010 01:04 pm
New planets around a star called 24 Sextanis are called Sex A, Sex B, and Sex C. Yes, Sex C. Apparently it is too Sex C for our solar system. Of course they were named in California.

Holy cow. Think extra-solar system life will be found in our lifetimes?

I propose that we live long enuf to find out.