One of the main ingredients in ketchup is sugar, so you, cjhsa, are eating loads of sugar, salt and oil... sounds very healthy.

Three of the major food groups! Where's the beef?

) of indulging in this truly quebec national dish ?

This definitive Québecois dish is so rich and greasy, it's often referred to as a "heart attack in a bowl", but hey, there are worse ways to go. :wink:

here you go - and keep the defibrilator handy ! 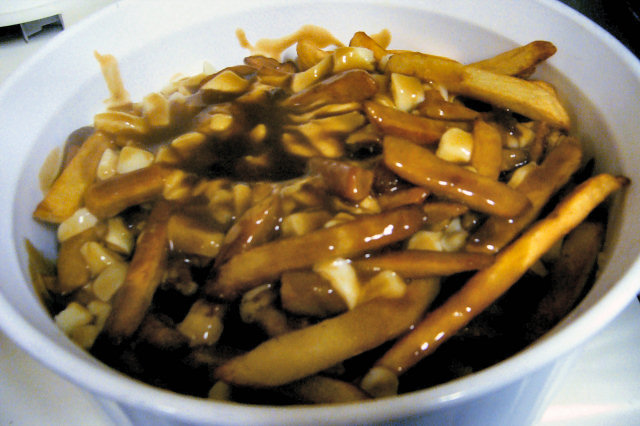 i wonder if francis has ever had the pleasure (

) of indulging in this truly quebec national dish ?

I had the occasion to tell already on this forum that, when been offered such, I politely declined...
0 Replies
1
Reply Thu 20 Dec, 2007 03:51 pm
Walter Hinteler wrote:

I had often heard that, and also that it's great for cassoulet.

We had a goose last week, which was about ten-and-a-half pound in weight (4.8 kg) and when I roasted it, it shed more than two pints of grease. That was duly collected and stored.

I had the occasion to tell already on this forum that, when been offered such, I politely declined...

francis :
i would hope that you would have enough respect for your french ancestors (now living in "la belle provence" ) to partake of their national dish !
i'm sure your heart will beat even faster after having enjoyed a good portion of poutine - unless your heart stops beating all together

:wink: .
i should assure you that poutine can now be found in many other canadian localities , and we may have a new canadian slogan : "canadians , united by poutine from the atlantic to the pacific " .
hbg

on november 20 , 2007 canada's NATIONAL POST newspaper devoted a special article to the "50 th" anniversary of the creation of poutine .

It is described as a cholesterol highball, a fatty delight and a fast food icon. And at 50, the concoction of french fries topped with gravy and salty cheese curds is gaining newfound respect.

It hasn't always been that way, though. Charles-Alexandre Théorêt, author of Maudite Poutine!, describes the dish to Montreal's The Gazette as being more psychological in nature:


A generous portion of shame fried gently in an inferiority complex and topped with a hint of denigration from the ROC (Rest of Canada) - and a touch of guilty pleasure. "Love it or hate it, poutine has become a strong symbol of Quebec," says Théorêt.

The exact origin of poutine is unclear, but most stories place the date at 1957. Fernand Lachance, a restauranteur who referred to himself as the father of poutine, was asked by a customer to mix french fries and cheese curds together in the same bag.


Warwick, then replied: "Ça va te faire une maudite poutine" ("It's gonna make a hell of a mess"). The sauce was added later to keep the fries warm.

Mess or no, the "lumberjack fat food" remains popular, and being elevated to an haute-cuisine dish while showing up on menus across the U.S.

0 Replies
1
Reply Thu 20 Dec, 2007 04:57 pm
The late Fray Angelico Chavez, New Mexico's preeminent historian once wrote about Santa Fe's growth, "The only threat to her own distinctive glory, and something to guard against these days, is the kind of hurried "progress" which has, not history or humanity, but only money as its sole aim and purpose."

Perhaps nowhere in Santa Fe has that hurried progress been more in evidence than in the plaza. One of the bastions against progress had been the Woolworth's department store, in place for several generations, but which finally gave up the ghost just before the turn of the 21st century.

In its place stands the Five & Dime General Store which retains much of the charm that made Woolworth's a throwback to better times.

Best of all, the Five & Dime retained the lunch counter in which the Frito Pie was invented nearly 50 years ago. Few, if any, do it better. The Frito Pie is served the old fashioned way, in an open bag of Fritos smothered with meaty red chile and shredded cheese.

The menu includes several other items, but you rarely see anyone order anything but the Frito Pie which made Woolworth's a Santa Fe institution. The lunch counter doesn't have much counter space and there are very few tables, so you just might have to walk around the plaza with your Frito Pie in hand, but you might never have a better one.

Thanks for clearing up that little mystery.

(Bookmarking to show Mr. Fix-it when he gets home from work.)
0 Replies