Baseball Playoffs 2007 - the road to the World Series

(wearing the paraphernalia again -- bring it on, fashion police!)

I must own this piece o' paraphernalia:

Dustin Pedroia -- first pitch of the dang World Series, the guy is a rookie, he hits a home freakin' run. The kid should be Rookie of the Year (not for that, that's the cherry on the sundae; he should be R of the Y for many, many other reasons)
Josh Beckett -- strikes out the first four batters. That apparently had not happened before. Guy should be the AL Cy Young Winner (not just for that, but for plenty more stuff). He's 4-0 in this postseason.
Papi! Youk! Manny! Tek! JD! Jacoby! Lowell! 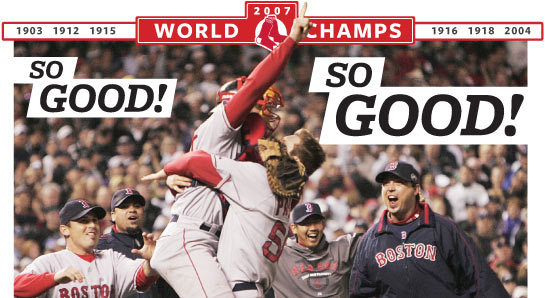 BTW, how often does this happen -- but 2 of the guys (last night's winning pitcher, Jon Lester, and the series' MVP, Mike Lowell) are cancer survivors: http://boston.redsox.mlb.com/news/article.jsp?ymd=20071029&content_id=2286217&vkey=news_bos&fext=.jsp&c_id=bos
0 Replies
1
Reply Mon 29 Oct, 2007 04:51 am
It was great. The Iraqies just had a lucky streak when they beat the Phillies. They needed to be swept. MWAAHAAHAAHAAHAAHAAHAAHAAA
0 Replies
1
Reply Sat 3 Nov, 2007 11:00 am
And now a poorly-scanned poem. I was going for a similar effect to when, in 1912, Isabella Stewart Gardner caused a sensation at the opera by wearing a head band that said "Oh, You Red Sox":

Dustin Pedroia -- just get that kid on base!
And buy another beer
for the shoo-in Rookie of the Year
Just don't ask him to make a face.

Big Papi has the most infectious grin
with a swing and a smile
as wide as a country mile
he'll do anything to win.

It's Manny being Manny, I know.
Playing hits off the monster wall
well -- everything he does is off the wall
He's definitely not your average Joe.

Mike Lowell could really use a comb
I'm not dissing his grooming --
the guy's only human!
But his eyebrows are the first part to come home

Three cheers for Jason -- he's our Captain 'Tek
a pitcher's best friend,
true Red Sox man to the end
we love him a bushel and a peck

Julio Lugo runs like he was on wheels
in the shortstop position
and by his own admission,
he's guilty of quite a few steals

Thank you for everything, Curt Schilling
More than a bloody sock,
frankly, sir, you rock!
Please come back; I hope management's willing

Was it culture shock for Dice-K this year?
He learned English, Spanish and French
from the guys on the bench
will translating be his next career?

Jon Lester -- give that man a cheer
He's got well-deserved fame
He won the last game!
What a difference for him, from last year.

Tim Wakefield's fooled them all
It dips, dives and dances
It spins, curves and prances
Why, it's his much-feared knuckleball!

Buchholtz -- the phenom named Clay
So far he's undefeated
will his feat be repeated?
A no-hitter on the first September day

Your Relief Pitching, AKA The Bullpen Band
Mike Timlin's still got pitching chops
They'll go over big
at his off-season gig:
Conductor of the Boston Pops

Papelbon dances for the Fenway faithful mob
He makes us all smile
Yet we ask all the while,
"Jonathan, please don't quit your day job."

Manny D., a favorite son of the state
Of our team he's a part
the guy is all heart
a strikeout is most hitters' fate

Your bench players, at the ready
Bobby Kielty with one swing of the bat
made our boys champions again
I'd rate that at-bat a "ten"
You, sir, get a tip of the hat

Coco Crisp is a talent we're happy to tap
with a fine command of center
he's Jacoby Ellsbury's mentor
How does he keep all that hair under his cap?

Eric Hinske, just watch him in the field
a catch in midair
and errors are rare
with line drives he just won't yield

Alex Cora is such a classy guy
what a great thing he did!
Gave his spot to the kid --
he didn't even bat an eye

Royce Clayton has finally got his ring,
the cap to his career
so glad he did it hear
man, don't that just beat everything?

Kevin Cash, give that man a hug
a place we will make
for anyone who can catch Wake
he filled in for poor injured Doug

Your management and coaching staff
Tom, John and Larry never seem to rest
we all know their names
'cause they take in most games
our owners are truly the best

What can be said for Terry Francona?
While other coaches are a mess
when dealing with the press --
like running with the bulls at Pamplona

... and the rest ...
There's much love for Fenway Park
whether a loss or a win
you'll leave the game with a grin
even navigating Kenmore Square after dark

The last but not the least, the tenth or eleventh man
Our affectionate demonstration
makes us part of a nation
It's me and you, the Red Sox fan
0 Replies
1
Reply Sat 3 Nov, 2007 11:46 am
jespah wrote:

On my list of things to do before I die.
0 Replies
1
Reply Sat 3 Nov, 2007 06:29 pm
Jespah may be buying us all dinner...I've heard a few "analysts" say CC Sabathia is most likely going to win the Cy. I obviously hope it's Beckett though.

Gargamel, just like you want to hit Fenway, one of my goals is to go to a game at Wrigley. I've been down in the neighborhood in the offseason...maybe next summer.
0 Replies
1
Reply Sun 4 Nov, 2007 08:51 am
Garg, let us know when you're at Fenway (we might actually buy you a real dinner). We've had a blast every time we've gone there -- and the first time it was pouring rain (I had wet money in my wallet for weeks; it was that rainy) and they lost but it did not matter.