I attended an exhibition game in Toronto in the '80's....the iceman
vs the brat McEnroe. Whattagame! Bjorn's cool on the tennis court
was legendary.

Later, at a gala dinner honouring the two, I sat in anticipation of
meeting Bjorn. His infant son and mother proved too much of a
distraction. Long after the dinner had ended, when I had given up hope of seeing Bjorn, he showed up. 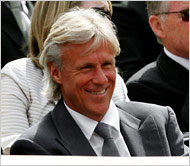 image from nytimes.com report on Federer winning over Nadal today
0 Replies
1
Reply Sun 8 Jul, 2007 01:08 pm
When watching him on tv today .... well, he became older like all of us :wink:
0 Replies