Ants in my garden.

0 Replies
1
Reply Sat 19 Jul, 2003 03:54 pm
Cucumber peelings or slices. Ants hate cucumbers and will do anything to not be any where near them. I discovered this solution in one of those Graham Haley Helpful Hints books and tried it when I had a recent ant infestation in my apartment. The ants were mounting an invasion of my bathroom. I went out and bought a couple of cucumbers, peeled them and put the peels in cheese cloth and hung it from the drain pipe under the sink. The ants were gone within hours.


Just looked up ants in his book and he has other suggestions too.

Sage or white pepper will repel ants if sprinkled around affected areas.

He also says to draw a chalk line on the floor or the wall where the ants march. Says ants won't cross a chalk line.

He also suggests leaving apple pieces, core or peelings where ants enter. When brought back to the anthill, the acid in the apple kills the queen and the colony. 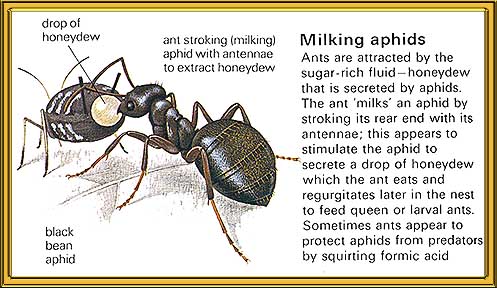 You might want to check the underside of the leaves in your garden to be sure you don't also have aphids.
0 Replies
1
Reply Sat 19 Jul, 2003 07:15 pm
ants in the garden don't bother me; as stated earlier they do seem to be beneficial. now, we don't like it when they start coming into the house -the smallest crevice seems to be large enough for them to get in (by mistake perhaps?). when that that happens we put some INSECTIGONE - diatomaceous earth from fossil deposits - at the point of entry. have also used it in the garden - it' a non-toxic product; of course you need to follow the instructions. it is harmful to ALL insects that come in contact with it; i understand that it works by "cutting" into the insects body. hbg.
0 Replies
1
Reply Sat 19 Jul, 2003 08:39 pm
By the by, copperheads smell like cucumbers and this is why ants avoid cucumber peels.

They really do--I have had opportunities to smell copperheads on two separate occasions.
0 Replies
1
Reply Sat 19 Jul, 2003 08:42 pm
You guys are great. I was all worried that they were eating the roots on my veggies that I was gonna do what I could to get rid of them. Now I know that they won't bother my garden and may actually be good for it, I'm going to leave them alone to do whatever they do. Before I posted this question I did a little research on line and someone said that cornmeal would work, so since I had some I sprinkled some all over my garden. I guess when they eat it it expands in their stomach and supposedly they explode. I suppose I jumped the gun in this instant by doing first and asking questions later, but it's nice to know that you guys are always ready to help out.
0 Replies
1
Reply Sat 19 Jul, 2003 08:46 pm
We don't have an ant problem at all in the house, but I'll know what to do if it ever happens :-D Never thought cucumber peels would ever be good for anything ;-)
0 Replies
1
Reply Sun 20 Jul, 2003 03:56 pm
someone told me today that ants won't cross talcum powder - so if you have problemns with them coming into the house a line of talc will stop them - I haven't tried it but he swears by it.
0 Replies
1
Reply Sun 20 Jul, 2003 04:15 pm
before using talcum powder better read this article from MEDLINE. according to this article talcum powder can be pretty nasty stuff. anyone ever hear of this before? hbg. http://www.nlm.nih.gov/medlineplus/ency/article/002719.htm#top
0 Replies
1
Reply Sun 20 Jul, 2003 04:28 pm
you might also read up about diatomaceous earth in this link. hbghttp://www.hawkassociates.com/diatect/profile.pdf
0 Replies
1
Reply Sun 20 Jul, 2003 05:54 pm
Vivien wrote:

someone told me today that ants won't cross talcum powder - so if you have problemns with them coming into the house a line of talc will stop them - I haven't tried it but he swears by it.

before using talcum powder better read this article from MEDLINE. according to this article talcum powder can be pretty nasty stuff. anyone ever hear of this before? hbg. http://www.nlm.nih.gov/medlineplus/ency/article/002719.htm#top

I never use the stuff, but that's good to know. I'll spread the word when me and the gals are wrapped up in girl talk, thanks ;-)

By the way, your user name always makes me want a hamburger. Hmmmmm, I wonder why, LOL!
0 Replies
1
Reply Sun 20 Jul, 2003 06:11 pm
I think the reference was to swallowing talcum powder.

I know babies can get into breathing difficulties if mama is overly enthusiastic with the powder can.

I also know that if you are having radiation treatment--or even x-rays--that you shouldn't have talcum powder on. Cornstarch is okay. Ground rocks can deflect x-rays and talcum is a ground up rock.
0 Replies