I'll show you the article, but won't transfer all the photos. I'm not sure what I think.. I'm a little conservative about cluttering up rivers, but on the other hand, this sounds and looks rather nifty....


Hudson World Bridge: An architect's proposal to span the Hudson River would be a gathering place like no other. By Fred Bernstein 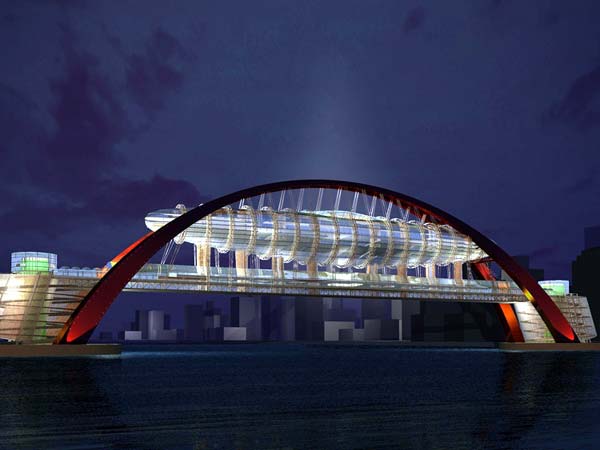 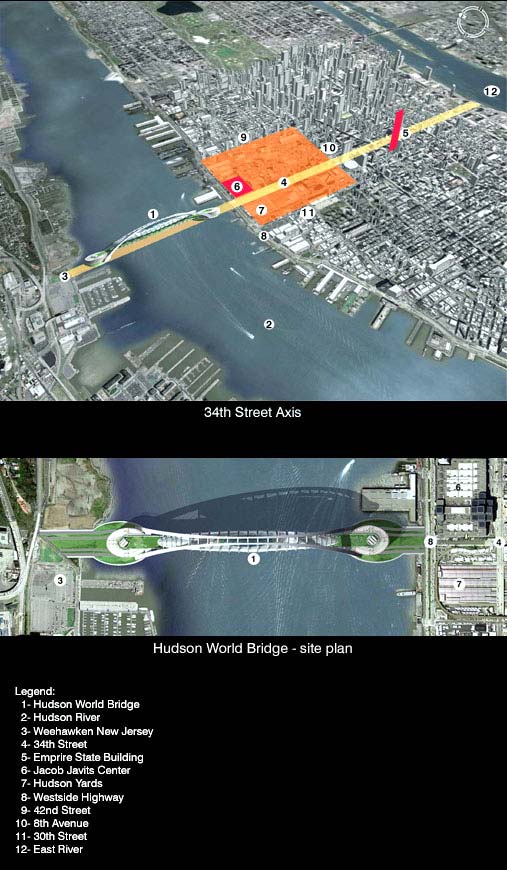 In 2002, I reviewed a show of designs for "A New World Trade Center" at the Max Protetch Gallery in Chelsea. One proposal, by Eytan Kaufman, stood out from all the others. Kaufman's project included a bridge across the Hudson River near Ground Zero. Kaufman realized that the redevelopment of Ground Zero could and should extend beyond the original World Trade Center site. (In fact, as subsequent events have proven, trying to squeeze a memorial, office buildings, stores, museums, train stations, and parking lots into 16 acres shortchanges them all.) And Kaufman had realized that a building over New York Harbor had the power to be especially stirring, not only because of the evocative power of water, but because that one body of water contains symbols of Freedom (the Statue of Liberty) and diversity (Ellis Island). My own Twin Piers proposal was directly inspired by those aspects of Kaufman's bridge.

Five years later, Kaufman is back with a proposal for another bridge over the Hudson River, the Hudson World Bridge. This time, there is no direct connection to 9/11. The bridge, designed in consultation with Ove Arup engineers, would span the Hudson at 34th Street, and would be not so much a transportation corridor as a destination, providing the city with a gathering place like no other. The surface of the bridge, nearly a mile long and 200 feet wide, would provide more than 10 acres of green park and plaza to be used for cultural and commercial activities. Hanging above the park would be a capsule-shaped building containing hundreds of thousands of square feet of meeting and exhibition space. At either end are hotels and ramps for emergency and service vehicles. (Automobiles would not be permitted on the bridge, but there would be escalators, moving sidewalks, and cable cars.) With its 34th Street location, the bridge could supplement the Javits Center, and would do so in far more spectacular fashion than the addition now planned. It could also do something the Javits Center has so far failed to do: attract development to Manhattan's Far West Side.

New York is where the suspension bridge and the skyscraper - the engineering marvels of the 19th and 20th centuries - came to fruition. In recent years, the city has ceased to be the world's leader in design technology. Kaufman's scheme would allow New York to reclaim that distinction.

Eytan Kaufman, Int'l. Assoc. AIA, started his New York City design and development practice dedicated to conversions in SoHo and Chelsea in 1977. Born in Israel, he received a B.Arch degree from the Technion Israel Institute of Technology, and came to the United States in 1966 to study and teach with R. Buckminster Fuller at Southern Illinois University where he received a M.Sc. degree in 1968. Kaufman taught Urban Design at New York University and Pratt Institute from 1971 to 1976.

Fred Bernstein has written about design for more than 15 years. He also contributes to the New York Times, Metropolitan Home, Oculus, and Blueprint./
Type: Discussion • Score: 1 • Views: 5,027 • Replies: 30
No top replies
1
Reply Fri 20 Apr, 2007 08:02 pm
Well, what we've got here is a really really long convention center to be built next to a really really big (and sometimes not so full) square convention center.
Hmm.
And there had better be some moving sidewalk or trams in that thing. Who's going to walk from one end of it to the other to see the display of office equipment?

And it has to be high enough for the cruise ships to slip underneath.

I see that image and think of thousands of citizens battling an enormous metallic sea slug and finally capturing it and securing it in place behind the St. Louis Arch.

It will go down as an historic battle and years from now people will still be talking about "The Day of the Slug."

Gus you are weird. You crack me up. What is it with you and animals. Do you have a fetish.

None to myself yet, which is getting to be a pain, as I just can't see the results without clicking on View votes or whatever it says.

On the convention center interior, yeh, yech, but that is what makes it work, I guess, financially. I'd rather it be all garden, oh, and maybe fern bars, whatever, old dining cars.

I'm the one who posted a thread whining about skywriting as art over the Hudson, so my sense of keeping the river as it is, is pretty high.

If they wanna build a bridge at 34th Street, at least let cars go on it.

The GW bridge is a nice looking bridge: Not happy with the look of the thing in the picture. It looks like a giant medical suppository suspended over I don't know what.
0 Replies
1
Reply Sat 21 Apr, 2007 02:58 am
I just voted other comment.

Joe(It looks like a giant medical suppository suspended over I don't know what.)Nation
0 Replies
1
Reply Sat 21 Apr, 2007 03:28 am
I feel compelled to add that native Noo Yawkers are NOTORIOUSLY averse to change. (I don't use all caps indiscriminately.)


(I apologize for all the typos and spelling errors in my previous post. I was emotionally overwrought when I wrote it.)
0 Replies
1
Reply Sat 21 Apr, 2007 06:20 am
If it could be made to rotate, or swing like a giant pendulum, then I'm all for it.

Are there any apartments where people could go fishing from their living room window?
At least have a giant Tarzan rope so people can fly out across the water!

I just provided a link to the picture instead of the picture itself (I haven't made time to go to a site and follow the process so I can load the pictures I kept that are really pretty).

People here do walk our bridge. The one on the left is the new one under
construction. They have cameras at different angles and you can see the construction in progress. There are lots of different pictures to download from this site.

That suppository (brilliant, Roberta, brilliant) is beyond tasteless. Then again, suppositories aren't supposed to be flavourful.

did a net capture a Zeppelin? Orson Welles might have liked it. Maybe.
0 Replies