we are now tied with tampa, thanx to an ol' fashioned beat-down at the trop last night.
we clubbed 6 dingers on route to a 13-5 rout.

bay lost one in the catwalk.
i understand it will be coming out of his next paycheck.

(excessive swivelling)
1 Reply
2
Reply Tue 16 Sep, 2008 03:17 pm
@Rockhead,
Kaz was a good pitcher a coupla years ago when he was a Puppy. Heck, he's normally a very good pitcher. I do wonder if there was something off with him. He seemed so defeated, like he'd given up hope. I'll take the win, for sure, but I don't like seeing people being emotionally crushed.

Unless, um, they're Yankees. 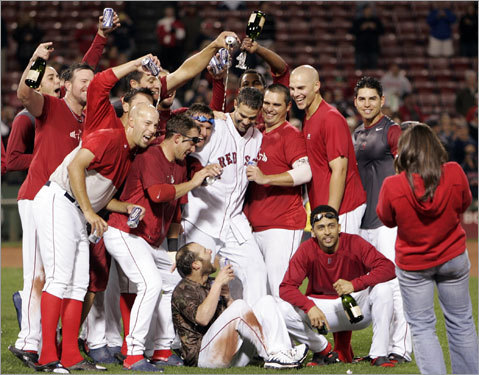 Maybe Pedroia can lead the way