He went to Eton, one of the top, if not the top public school in the country, then he went to Oxford. Clearly you don't understand anything, you can't even get the most basic of facts right.

When he came on the tenor of the reporting here was that he fails to understand elementary economics. He was pretty much supposed to drive the nation into mass poverty. Then last year we started to see some reports to the effect "OK, so the economy is doing ok at the moment, but just you wait". As for abuse that is what his cutting budgets on programs that fund the underclass were supposed to be.
1 Reply
4
Reply Sun 10 May, 2015 03:34 am
@izzythepush,

0 Replies
1
Reply Sun 10 May, 2015 04:09 am
curious
0 Replies
1
Reply Sun 10 May, 2015 04:34 am
@hawkeye10,
This is the British Thread, not the appallingly bad coverage of international events by American Media thread. You have got so many things wrong, you thought Britain was in the Euro zone, that the left was wiped out in Scotland and that Cameron is some sort of country bumpkin.

Shuffling your feet and blaming it on the news sources you access is not good enough. You are astoundingly ignorant about events beyond your own back yard, that's your fault, it's your choice not to get better informed.

What's even worse is that despite your ignorance, you think we should pay attention to your opinions.

You know nothing about Britain, so instead of the usual bombast why not ask questions? You might actually learn something. (That's what a smart person would do, but a blowhard pseudo intellectual would do the exact opposite.)
2 Replies
1
Reply Sun 10 May, 2015 04:50 am
@izzythepush,
Alex Salmond contradicts Nicola Sturgeon by calling SNP election success a 'staging post' to another Scottish independence referendum

Alex Salmond has opened up the prospect of another referendum in Scotland, saying that the SNP’s landslide victory in the general election was a “staging post” on the way to independence.

Not sure what Salmond is playing at. Maybe he's been at the Glenfiddich. Certainly Sturgeon doesn't need this.
I feel that the SNP involvement at Westminster will be a massive damp squib. They've got no power to change anything, and will have to take whatever Cameron hands them. Sturgeon says "Mr Cameron will have to listen". I think that's right, but whether he'll take a blind bit of notice is another matter.
2 Replies
0
Reply Sun 10 May, 2015 09:54 am
@McTag,
Exactly, and I'm sure there's plenty of back bench Tories eager to say exactly what they think of them, (and Scotland,) across the dispatch box. Things could get very nasty.

As pundits have already pointed out, Scotland voted for the Union to continue, that gives the Tories legitimacy in Scotland, it might not be fair, but it is legitimate.

The Tories need to listen to Boris and give them Devo Max right away, Cameron promised it, and he must deliver otherwise they will have no legitimacy.
0 Replies
1
Reply Sun 10 May, 2015 10:15 am
@McTag,
Interesting to note the difference in VE celebrations. The Russians have parades of military hardware watched by visiting, non democratic, dignitaries, we've got Chas 'n Dave singing George Formby numbers.
0 Replies
-2
Reply Mon 11 May, 2015 12:16 am
Quote:

Begs the question of into how little of bits will this former superpower disintegrate down too? And outside of its money men who skim the wealth created by mostly low wage global labor what are these English good at?
1 Reply
5
Reply Mon 11 May, 2015 01:01 am
@hawkeye10,
One thing we're very good at, is recognising a gobby troll who's out looking for an argument.

This is the British Thread, not the appallingly bad coverage of international events by American Media thread. You have got so many things wrong, you thought Britain was in the Euro zone, that the left was wiped out in Scotland and that Cameron is some sort of country bumpkin.

Shuffling your feet and blaming it on the news sources you access is not good enough. You are astoundingly ignorant about events beyond your own back yard, that's your fault, it's your choice not to get better informed.

What's even worse is that despite your ignorance, you think we should pay attention to your opinions.

You know nothing about Britain, so instead of the usual bombast why not ask questions? You might actually learn something. (That's what a smart person would do, but a blowhard pseudo intellectual would do the exact opposite.)

In my Navy days I had a fair amount of contact and even service with the Brits - even qualified in Buccaneers and flew with 813 squadron off the "original" Arc Royal (with catapults & arresting gear). Mostly good guys and some lasting friends. Every once in a while I would encounter an individual of a particularly obnoxious and strangely consistent type, judgmental, scornful of others and unaware of the effects of his persistent bombast. With Americans they were often particularly unpleasant exhibiting what always seemed to me a degree of scorn for us and our culture that usually struck me as unnaturally excessive and forced - something I interpreted a strange kind of of sublimation of deep seated feeelings of insecurity and inferiority. Izzythepush appears to be one of that most disagreeable tribe. Happily they were a very snall minority and most of my RN aquaintences were great guys.

I don't pretend to know the key issues in the recent UK election and certainly don't have the informed intuition that most of you Brits here have. The rise of the SNP was a factor that confounded my limited understanding of British politics, significantly lowering my own confidence in my intuition about the likely results. However, I was struck by the very significant departure of the election result from what both polls and prognosticators indicated about the expected results of the election. Such surprising outcomes have occurred here as well, and they often are later found (often by the same pontificators who predicted a different outcome) to have marked the emergence of a fairly long-standing drift of public attitudes from those of elites that otherwise dominated the public political conversation. The issues behind such things here have varied but something like that drift of elites away from the public mind appears to bave beren a fairly consistent theme. Is/was something like that afoot in the UK election? If so, what in your views were the issues behind it?
0 Replies
0
Reply Mon 11 May, 2015 05:28 pm
I saw this, and thought of you. 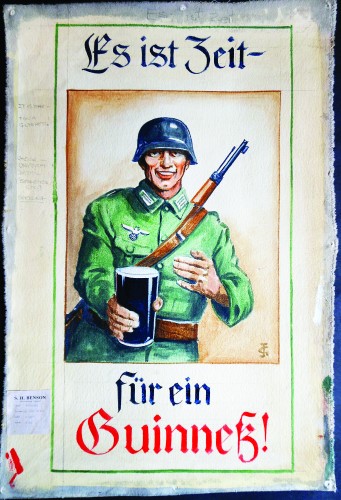 1 Reply
2
Reply Mon 11 May, 2015 08:50 pm
@izzythepush,
Is that Guinnes -craving stormtrooper a reference to DeValera and WWII propaganda? Did the Irish betray their former English oppressors at a moment of mortal danger while the British stood alone against the Facist menace? That certainly is an understandable interpretation of these events ... if considered from a certain viewpoint. If however, one includes in his perspective the history of 19th century British misrule over Ireland; or the history of the destabilization of the Middle East done by Britain and France (with some help from Russia) during WWI along with exciting the desire in Japan for a Pacific Empire also done by Britain during that period; and the history of the vindictive Treaty ending WWI and the supine accomodation to the rising Nazi reaction to it that followed during the early 1930s .... one can find himself with a different point of view.

I'm not casting blame here: merely noting that perspective can be the real decisive issue in such matters.

There are multiple perspectives on many things in the world, including The efficacy (or lack of it depending on your viewpoint) of American policy in maintaining stability in the interregnum between WWII and the fall of the Soviet empire; our wise (and unwise) actions after that collapse; the efficacy of the British empire in maintaining world-wide stability (or protecting its self-interest, (again depending on your viewpoint) between 1813 and WWI ..... and so on.

You should know that my father, himself an Irish immigrant from Ennis, who came here as a young man after the Irish Civil war, got himself elected to the U.S. Congress in his early 30s and voted against Lend Lease. This issue and the struggle over post WWII empire that culminated at the Breton Woods Conference and the clash, between the pretentious and aristocratic John Maynard Keynes and Harry Dexter White, an American middle class Jew with likely communist sympathies, over the post war monetary system, also involved different points of view. --- as has the long history of relations between the United States and the British Empire, now UK involved some persistent differences in point of view.

I think it is important to understand this dimension of public events and indeed human history. The world and human behavior are complex things,.... far more complex than the relatively trivial theories and story lines we humans create largely to justify what we have done and what we want. I believe a fundamental component of wisdom is the willingness to see and consider the influence of nperspective on such issues. It can be uncomfortable for us all to do so, and the unpleasant fact is that we all stand closer to hypocrisy than we usually care to admit.
1 Reply
3
Reply Tue 12 May, 2015 01:31 am
@georgeob1,

we all stand closer to hypocrisy than we usually care to admit.

Yeah, I find it difficult.

Good man George, a worthy couple of posts. Glad to see you're still functioning magnificently.
1 Reply
-2
Reply Tue 12 May, 2015 01:36 am
I put Gob on ignore a long time ago, I'm not interested in the opinion of anyone who boasts about his Nazi supporting father, and how he kept volunteering for bombing missions in Vietnam. Those children won't napalm themselves you know. 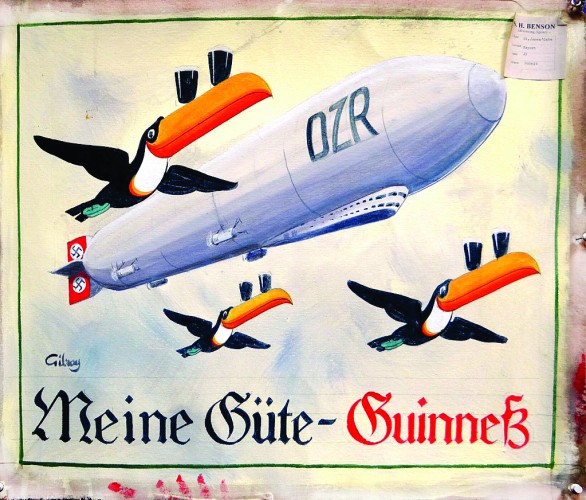 2 Replies
1
Reply Tue 12 May, 2015 05:15 am
@izzythepush,
I'm not going to show another advert (those for Guinness actually weren't published/printed ... companies were prohibited from using the swastika or Nazi colours in their advertisements) but some Englishmen thought, the Nazis should learn to play cricket: the Worcester Cricket Club toured Germany in 1937 1 Reply
0
Reply Tue 12 May, 2015 05:20 am
@Walter Hinteler,
And the England football team famously gave the Nazi salute. That's still not the same as being an active Nazi supporter in the US Senate.
1 Reply