Forums: Europe, British, Britain, Brits, able2know
Email this Topic • Print this Page
1
Reply Mon 8 Apr, 2013 09:20 am
@spendius,
Maybe, but she was responsible for the destruction of whole communities, some for generations. She sold off all our utilities, meaning higher bills and higher fares. She almost crippled the NHS. She made the UK a nastier, more selfish place.

**** taste, it's Thatcher.
0 Replies
1
Reply Mon 8 Apr, 2013 10:09 am
@spendius,
bimp
0 Replies
0
Reply Mon 8 Apr, 2013 11:52 am
"Margaret Thatcher did great hurt to the Irish and British people during her time as prime minister. Working class communities were devastated in Britain because of her policies. Her role in international affairs was equally belligerent whether in support of the Chilean dictator Pinochet, her opposition to sanctions against Apartheid South Africa; and her support for the Khmer Rouge. Here in Ireland her espousal of old draconian militaristic policies prolonged the war and caused great suffering."

Gerry Adams.
1 Reply
0
Reply Mon 8 Apr, 2013 11:53 am
@izzythepush,
"Margaret Thatcher described Nelson Mandela as a "terrorist". I was there. I saw her lips move. May she burn in the hellfires."

If they try to foist a state funeral on us there'll be a bloody riot.

That song and dance she patronised the liberal intelligentsia with over the lads on nightshift at British Leyland having camp beds was ridiculous. The Fat Cats must have laughed. Lady Bertram would have been dumbstruck with incomprehension at the fevered reaction.
1 Reply
1
Reply Mon 8 Apr, 2013 05:13 pm
@spendius,
I used to be ashamed every time I saw her on TV but eventually I learned to giggle.
1 Reply
1
Reply Tue 9 Apr, 2013 02:34 am
@spendius,
This pretty much sums things up. 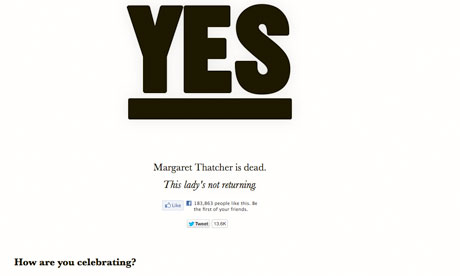 Hundreds of people gathered in city centres to hold street parties "celebrating" the death of Baroness Thatcher on Monday night.

In Glasgow revellers popped champagne while chanting "so long the witch is dead" while in Brixton one critic reorganised the letters on Ritzy Cinema's hoarding to say "Margaret Thatcher's dead lol." 1 Reply
1
Reply Tue 9 Apr, 2013 03:40 am
@izzythepush,
I'd been born and bred into a Conservative family - even belonged to the Young Conservatives at one point. But when Thatcher came into power - well, I said goodbye to the Tory party for ever! Became a lapsed Tory I guess. Then thought about being a Socialist - until Blair came in, hugging Maggie's policies. So I dabbled with Liberalism - and then we had Clegg, to me another Thatcherite. I'm now off politics!
3 Replies
2
Reply Tue 9 Apr, 2013 03:49 am
@vonny,
My parents are bloody Tories too. We argue regularly, most recently about the book Little Black Sambo.

I became very disenchanted with Blair after Iraq, but my own MP John Denham resigned his cabinet seat in protest, before the war, unlike Claire Short. As a Labour member I voted for Ed Milliband, as did John Denham, and I still think we voted for the right brother.

One thing I noticed about the effusive praise heaped on Thatch during the BBC's coverage yesterday was the continued reference to Union kingpins, instead of the thousands of hard working people that make up Union membership.
0 Replies
1
Reply Tue 9 Apr, 2013 04:02 am
@vonny,
vonny wrote:

So I dabbled with Liberalism - and then we had Clegg,

0 Replies
1
Reply Tue 9 Apr, 2013 04:59 am
@vonny,
I have no idea what my parents voted. I don't recall politics ever being mentioned. I've only ever voted once. The half pencil was attached to the wall with a piece of string and I heard an elderly lady who had cancelled me out give her reasons. I felt a mild sense of post-coital ennui.
0 Replies
-1
Reply Tue 9 Apr, 2013 05:02 am
@vonny,

If they try to foist a state funeral on us there'll be a bloody riot.

Drive tanks over the rioters.

If they try to foist a state funeral on us

Seems that they are going to!

I'm not quite sure what makes for a state funeral verses otherwise, but what I'm hearing is that it will not be a "state funeral" but a "private funeral with full military honors".

Probably because she was one of your nation's greatest leaders, and she single-handedly made your nation into the success that it is today.
3 Replies
2
Reply Tue 9 Apr, 2013 05:12 am
@oralloy,
You are assuming success, defined by you, is a good thing oralloy. She wanted to take the credit for pressing 50,000,000 noses to the grindstone. She didn't defeat the miners. Economic circumstances did.
1 Reply