You'll know that I presume.

Oscar Pistorius and his dead girlfriend: there initially was mention of a cricket bat, bloodstained and material evidence, made at the time of the arrest. Some reports said he bashed her head in with it. Some witnesses reported bad head injuries on the deceased, but this was not mentioned in court. No autopsy report has yet been made public, and the relatives were given her body for burial (or maybe cremation), so presumably they could have examined it for themselves.
This is a very peculiar case, in the way it is being conducted. Why have no clear statements been forthcoming? Granted, we only had a bail hearing but I think things are being covered up. OP's lawyers seem to be running rings round the police.
2 Replies
1
Reply Mon 25 Feb, 2013 03:41 pm
@McTag,
i may be wrong, but i thought the cricket bat WAS mentioned in court...i heard it was not meant to be made public but someone leaked it.

he doesn't have a leg to stand on to be fair

I think the story's got legs, anyway.

I think he was taking a drug which drove him into a rage.

Do they still use the white smoke? I hope they've had that chimney swept.

yep they still do. weird though...does that mean they can only heat the place when a pope resigns/retires/dies? maybe in future they will signify the election of a new pontiffby turning on the central heating.
1 Reply
1
Reply Tue 26 Feb, 2013 03:43 pm
@Berty McJock,
That fumata bianca isn't mentioned in the 1996 election regulations ("Universi Dominici Gregis") anymore and wasn't added this year in the Normas Nullas on 22nd of February again. But smoke was used in 2005 ... though made "electronically".
1 Reply
1
Reply Tue 26 Feb, 2013 03:45 pm
@Walter Hinteler,
thanks for clarifying...i remember seeing the smoke when benedict xvi was elected, but did not know any of that. seems they DID switch on the central heating after all

I hear he's going to have to give up the red shoes.
I bet they won't fit the new bloke...especially if he's an African.

That was an impressive, ruthless and strangely prompt decision concerning our Cardinal O'Brien.

I've noticed that Spendy gets a bit touchy when I raise this and similar topics. But it's important.
The main thing that he has done imho, and this is not what he was sacked for, is preaching against certain behaviours while indulging himself privately in just that way.
Totally and cynically hypocritical.
1 Reply
1
Reply Wed 27 Feb, 2013 06:22 pm
@McTag,
Do as I say and not as I do. We have to allow for human weakness otherwise nobody would dare preach anything. Rabbit morality is close behind that.

You're getting like JTT Mac: accusing me of being touchy when it is you who is in that state. I know you're up a gum tree. There's no need for me to be touchy. 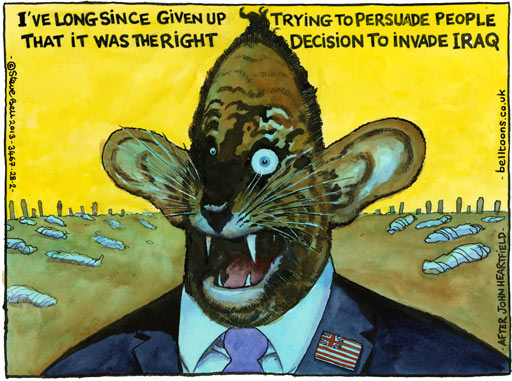