Link: Too much packaging? Dump it at checkout... 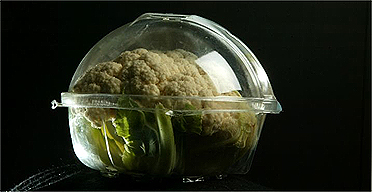 
Too much packaging? Dump it at checkout, urges minister


Supermarkets have committed to cutting wasteful packaging on groceries, but the environment minister Ben Bradshaw said shoppers should resort to direct action to force the pace of change Photograph: Graham Turner


Fed up with green beans on black plastic trays? Tired of cucumbers in tight-fitting plastic jackets? Have you had enough of bananas in bags? Then, according to a government minister, you should remove the offending packaging - and dump it at the checkout.
Shoppers were urged yesterday to take direct action to force supermarkets to cut the excessive and wasteful packaging that goes direct from the shop shelf to the household bin. The environment minister Ben Bradshaw advised food shoppers to leave excessive wrapping at the tills and to report the stores to trading standards in an attempt to cut the amount of unnecessary plastic sent to landfill sites.

He said shoppers were "bombarded" with excessive food wrappers and warned that he would consider new laws to force shops to cut back on waste if they had not voluntarily made reductions by 2010.
His hardline approach was announced after a meeting with the UK's 13 biggest grocers to discover what progress they were making in cutting back. Mr Bradshaw said it was "unacceptable" that packaging had increased by 12% between 1999 and 2005, and now accounts for one-third of an average household's total waste.

The big grocers signed up to an agreement last year, called the Courtauld commitment, to slash packaging waste within five years and also to tackle the amount of food that goes to waste.

So far, the 13 retailers have cut packaging waste by 35,000 tonnes, according to figures from the government's Waste and Resources Action Programme. However, the WRAP target is for cutbacks of 340,000 tonnes by 2010.

Yesterday Defra confirmed that three of the biggest food manufacturers - Heinz, Northern Foods and Unilever - have added their names to the Courtauld pledge.

Mr Bradshaw said it was important for shoppers to be aware that recycling was not necessarily the best option. "It is better than throwing stuff away, but reduction is better still," he said.

He illustrated his comments with examples of wasteful packaging - such as four apples, wrapped in polythene and presented on a polystyrene tray - which cannot be recycled. He acknowledged that all the supermarkets had come up with plans to cut packaging, but said: "We need to see the delivery of those plans. We need to see quantifiable reductions."

While saying he would like to see targets for waste reduction spelled out in and included in annual reports, Mr Bradshaw also urged shoppers to force the grocers to move faster by taking direct action. After paying for their goods, shoppers should remove "excessive and unnecessary" wrappers and leave them behind.

A spokesman for Tesco said: "We would prefer it if our customers use our recycling facilities, but if customers want to leave their packaging with us we will deal with it appropriately." Earlier this year Tesco unveiled a10-point "community plan" designed to boost its reputation and green credentials, which included promises to boost recycling and cut packaging. Its latest figures, for 2004, show that it recycled about 60% of its waste.

Tesco added that some packaging was "essential for health and safety", but the company was "working hard" to reduce waste. Under a new reward system - which offers clubcard loyalty points in return for not taking away bags - the chain says it is giving out 10m fewer carrier bags a week.

A spokesman for Asda described the minister's call for shoppers to dump their waste in store as "an interesting development". He added: "We are not sure it is that helpful, but we understand what he is getting at." It said it was making small changes which have a big impact - such as taking pizzas out of cardboard boxes, which will save 747 tonnes of cardboard in a year - and was also "rolling out the best recycling machines in the world".

Sainsbury's said it was "totally committed" to cutting back on packaging and using more environmentally friendly wrappers: "We have made significant progress this year, including moving a great number of food and drink items to either compostable materials ... or recyclable material."

But a spokesman for the Department of the Environment, Food and Rural Affairs said compostable wrappings were not always the best solution as they can cause increased damage to the environment if not disposed of correctly.

Mr Bradshaw also said consumers should be aware that legislation to curb excess packaging was already in force and that offending retailers and food manufacturers were liable for prosecution. For example, Burtons - under license to Cadbury's - was fined £2,000 for excessive packaging of chocolate finger biscuits.

The maximum fine that can be levied under existing laws on "essential packaging requirements" is £5,000.
Type: Discussion • Score: 1 • Views: 2,158 • Replies: 0
No top replies