Australian island sanctuary to be rid of rabbits

Rabbits are destroying the habitat of threatened seabirds on a remote Australian island and should be culled, the environmental group WWF has warned.
Rabbits are stripping Macquarie Island, near Antarctica, of its grasses causing landslides and destroying nesting sites for penguins and albatrosses, WWF said.

The group has been joined by the Australian Greens party in urging an immediate cull of the pests.

Rabbits were introduced to the island by European sealers in the 1800s.

The population of rabbits has swollen in the last two decades to more than 100,000, WWF says.

The rabbits have stripped entire hillsides of native tussock grasses that seabirds use for shelter and nesting.


"Albatrosses are extremely faithful to their sites and are unlikely to breed anywhere else if their habitat is lost," said Julie Kirkwood, WWF's policy officer for invasive species.
Macquarie Island, which is about 34km (21 miles) long and 5km (three miles) wide, is also a breeding ground for about 850,000 pairs of royal penguins and 100,000 seals.

It was listed as a World Heritage area by the United Nations in 1997.

A recent landslide caused by loss of grass cover on one hillside destroyed half the nests on one albatross site, WWF said.

And 20 landslides were reported on the island in one month, killing a number of king penguins and their chicks, the group reports.

Rats and mice are also increasing in number and are eating young seabirds in their nests.

Last week, the Australian Greens joined the WWF's call for a rabbit and rodent eradication plan to be implemented on the island at a cost of $7.5m (£4m). 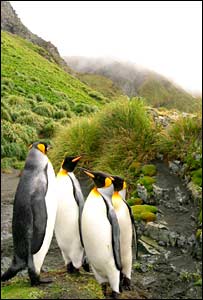