Forums: Reference
Email this Topic • Print this Page
Reply Sat 1 Jul, 2006 09:09 am
It is widely believed in China that Lei Feng, a national hero of the 1960s, is also adored by the military people of the United States. His portrait is found on the wall of classroom in the West Point Military Academy. Ding Xiaowen, Foreign Minister Li Zhaoxing's secretary proved that it was not so. However, some people who have been to the West Point Military Academy, told me that badges bearing Lei Feng's image were seen in a shop on the campus. I want someone to prove to us that this is true or otherwise.
And also if Suntze' Art of War, an ancient work on military strategies and tactics, could also be found in that shop.

Sorry, I don't know how to insert a photo of Lei Feng, here.
Type: Discussion • Score: 1 • Views: 5,124 • Replies: 3
No top replies
2
Reply Sat 1 Jul, 2006 09:48 am
Our military academies study war, so it shouldn't be very surprising to find books and other military-related materials on the subject within their walls.

Sun Tse's Art of War has carefully been studied by U.S. military people for a long, long time. The Long March and Chu-Teh's role in developing the PLA's doctrines are of similar interest. I can't say how important Li Feng is in the current curriculum.
0 Replies
1
Reply Sat 1 Jul, 2006 09:49 am 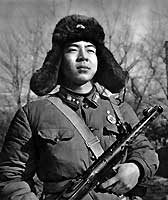 I have no idea if the picture is at West Point but here is a picture and some information on Lei Feng. I am guessing that a hero of the Chinese Communist Party would not be pictured at West Point, no matter how good an example he ever set, but I don't have anything definitive on that. Also, in looking up Lei Feng and West Point on Google, I just found a similar question, over and over again, and no answers. I get the feeling that this is an urban legend. www.snopes.com doesn't have anything on this.
0 Replies
1
Reply Wed 2 Sep, 2015 09:32 am
@fansy,
It's a mistake made by a Chinese news reporter at 70s.Li get excited when he read an article about West Point students learn from Lei Feng written by American news paper then he translated it and quoted it at different papers.Everything is good but he neglect one thing the article he read is written on April 1.Li state the mistake and make apology on Chinese social media weibo at 2015.