Hey Francis! What have you done with all the piafs?

We all know your deep concern about the piafs of Paris.

English sparrows and starlings
eat the farmers grain and soil his corpse.

Not related to the topic, but the English kids also wrote:
A person should take a bath once in the summer, and not quite so often in the winter.

Porc? Why pigs? Are you trying to say pigs wash more often than anglo saxons?

And yes Francis I have a confession to make, I started this thread because I was so upset about the little birds of Paris.
0 Replies
1
Reply Mon 24 Apr, 2006 05:17 am
You see, Steve? 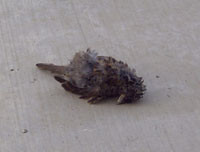 This is how they deal with piafs in the Netherlands, if they ignore the eviction order they get treated to a load of grapeshot (and then the sorpus delicti is
recovered and taxidermically pampered and then displayed in a natural history museum with other historically outstanding sparrows. It's true!)
0 Replies
1
Reply Thu 27 Apr, 2006 06:30 am
All sparrows deserve to die a terrible death.

Because they are murderers.