Still, she was a great cook.

I looked up pierogies and found this image:

I wonder if there's a knish mascot out there anywhere?

saw this in a card store a few years back, had me rolling...

Not sure what it has to do with the holiday, but it's funny....

very funny.
I put one on mso;ga's thread

A fellow, not too long off the boat, was walking down Delancey Street when he heard someone calling him. He turned around. "Meyer!" yelled the voice. "Meyer Greenbaum!"

It was a guy who Meyer had known from the actual boat. "How are you doing? I confess, I've forgotten your name, I'm sorry. And, you should know, when I came here, I got myself a new name, I'm now Mike Green." said Meyer (Mike).

"Sean Ferguson!" exclaimed Meyer/Mike. "How the heck did you get such a name?!?"

"Well", said Sean, "before we left Poland, my brother told me that our last name, Klifnigkiciwziovec, would be so hard for the clerks at Ellis Island to spell and say, that they'd change our name. So, he said, I should be prepared, and have a name handy, and just use that."

"And you picked Sean Ferguson?"

"No, I picked David Klein."

"Then how the heck did you end up Sean Ferguson?"

Sean/David answered, "I was on the boat, and I kept trying to remember that name. I kept saying it over and over to myself, David Klein, David Klein, David Klein. And I got myself all worked up. So when the time came and I was in front of the clerk and they asked me what my name was, I blanked out, slapped myself on the forehead and said, 'Shoin fergessen!'."*

Mrs. Katz and her lawyer.
0 Replies
1
Reply Thu 6 Oct, 2005 09:30 am
Jespah
Jespah, I miss the Jewish holidays since I moved from the San Francisco Bay Area. I was invited into homes to join family celebrations of my many Jewish friends. A Temple was less than 50 yards from my office window so I was constantly aware of activities both joyous and sad.

I've discovered a large Jewish community in Albuquerque through my membership in the organization for Life Long Learning, largely associated with the university and some of the high tech industries. Makes me feel right at home.

A few years ago I came across an article about the countless Yiddishisms that are among the most vivid words now considered part of the English language. I perused the list and tried to use some of them in a silly short story. The list of words follows my story. How many can you use in a piece of your own. Have fun!

TALK YIDDISH TO ME
By BumbleBeeBoogie

The Kvetch held her audience of Yentas spellbound as she related her tale of the antics of Murray, the Nebbish Shnorer, at the bakery Maven's Mazal Tov Bagel and Knish shop.

"That Murray," she said, "where he gets all his Chutzpah considering he's such a Gonif, I don't know, already."

"That no-good Shmeggegi Murray, he tried to sneak Bagels from the rack, but such a Klutz, he was, the Shlemiel knocked the glass of hot tea right out of the Mensch Ruben's hands and it spilled all over the poor Shelmazal's trousers."

"Aach!" the Yenta continued, "Murray thought he could Shmooze his way out of that fine mess. He smiled his Schmaltzy smirk at Ruben and wiggled his Tushie just like the Shmendrick he is and said Oy Vey! No problem, Nu, weren't you going to take your suit to the cleaners this week, already?

Bagel and knish are among Yiddish-termed foods that have become popular American favorites.

Chutzpah is amazing nerve or guts, sometimes bordering on arrogance. The "ch" is correctly pronounced by making a sound similar to clearing one's throat.

Gonif, literally a thief, describes anyone engaging in dishonest practices.

Klutz is a clumsy person.

Kvetch is a perpetual complainer; also used as a verb, as in "Stop your kvetching."

Maven is a specialist or expert.

Mensch, Yiddish for man, is used to describe a person exhibiting high moral values, consideration for others and kindness. It's the ultimate compliment for a son-in-law, as in "He's a real mensch."

Nebbish or nebbich is a pathetic person, loser or nerd.

Nu is used similarly to well or so in English. It is the Yiddish way to nudge---or offer pushy encouragement---to another person. For example, "Nu, when are you gtting married, already?"

Shmeggegi means a person who can't do anything right.

Shlemiel is an unlucky, bungling person who, for example, spills his soup. A shlemazal is the person on whom the soup lands.

Shmaltz, literally fat, is used to describe something overly sentimental. For example, "Aach! That movie is so schmaltzy."

Shmendrick means an insignificant person. It often is used to describe a child as a rascal or "little devil." For example, "My grandson, the shmendrick, has me wrapped around his little finger."

Shmooze is another way to say chat or mingle.

Shnorer, or freeloader, is the person who always stops by during dinner and brings an appetite.

Tuchas, tush or tushie comes from the Yiddish for derriere.

Welcome, have some lox!
0 Replies
1
Reply Thu 6 Oct, 2005 09:13 pm
Rashashana! Mine wasn't great but I'm trying to ensure a better Yom Kippur. I hope you're all inscribed in that big book in the sky. 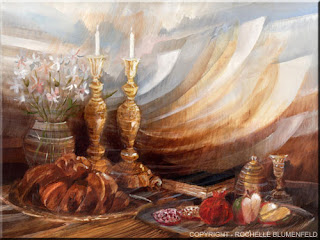 Happy Rosh Hashanah, jespah and Regis, Roberta and of course all our Jewish friends here.
1 Reply
3
Reply Wed 28 Sep, 2011 07:15 pm
@CalamityJane,
hahaha! for those that may not know...gefilte fish..is ground fish patty...it's fishy tasting......yucky texture. Can you imagine something that REQUIRES hot horseradish to help it be tolerable? The patty is ground so that the fish tails, fins, heads and bones are included....bones and trimmings. Yummy, huh?

L'shonah tovah, tikatevu. Hebrew phrase that states "may you be inscribed (in the book of life) for a good year."
0 Replies