Police or Prosecutor Misconduct Is at Root of Half of Exoneration Cases, Study Finds

Forums: Justice
Email this Topic • Print this Page
Reply Fri 2 Oct, 2020 02:15 pm
Police or Prosecutor Misconduct Is at Root of Half of Exoneration Cases, Study Finds

Wrongly convicted Black defendants were slightly more likely than whites to be victims of misconduct, especially in drug and murder investigations.
These five men were wrongfully convicted as teenagers of raping a jogger in Central Park in 1989. A new report found men and Black exonerees “were modestly more likely to experience misconduct.” 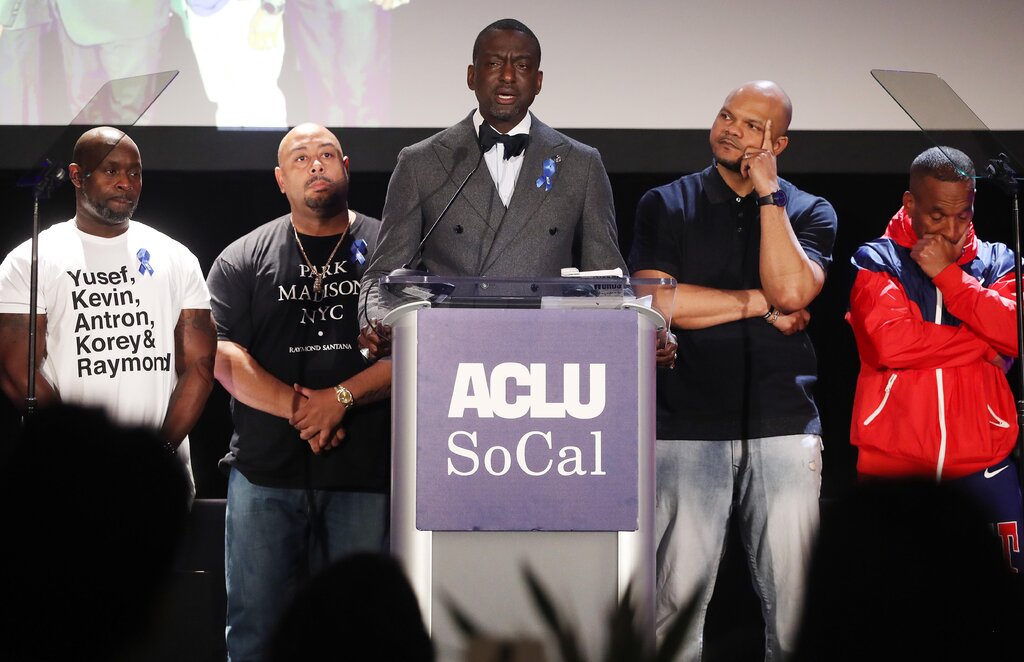 These five men were wrongfully convicted as teenagers of raping a jogger in Central Park in 1989. A new report found men and Black exonerees “were modestly more likely to experience misconduct.” Credit...Mario Tama/Getty Images

You know, the case Donnie Two Scoops Trump interjected himself into in such a privileged white manner.

Official misconduct played a role in the criminal convictions of more than half of innocent people who were later exonerated, according to a new report by a registry that tracks wrongful convictions.

According to the report, by the National Registry of Exonerations, official misconduct contributed to false convictions in 54 percent of exonerations, usually with more than one type of misconduct. Over all, men and Black exonerees “were modestly more likely to experience misconduct,” although there were larger differences by race when it came to drug crimes and murder.

“Official misconduct damages truth-seeking by our criminal justice system and undermines public confidence,” Samuel Gross, a professor emeritus of law at the University of Michigan and the report’s lead author, said in a statement on Tuesday.

“It steals years — sometimes decades — from the lives of innocent people,” said Professor Gross, senior editor of the registry. “The great majority of wrongful convictions are never discovered, so the scope of the problem is much greater than these numbers show.”

The report details the different types of misconduct that can occur at different stages of a case. Nearly all of the official misconduct identified falls into five general categories: witness tampering, misconduct in interrogations, fabricating evidence, concealing exculpatory evidence and misconduct at trial.

On Tuesday, Joel Feinman, the chief public defender in Pima County, Ariz., which includes Tucson, called the report “one of the least surprising things I read this morning.”

Mr. Feinman said that prosecutorial misconduct, which was detailed in the report, rarely garnered “the attention it deserves.”

The new report follows a 2017 study by the registry that found that Black people were more likely to be wrongfully convicted than their white counterparts, and more likely to spend more time in prison before being exonerated.

Dr. Turè, who is also the senior fellow of the Urban Ethnography Project at Yale, said the report was a tough condemnation of the criminal justice system, and it supported the Black Lives Matter critique that the system itself, from the point of entry with law enforcement officers to encounters with prosecutors, is rife with corruption, “and it seems to be of the racist sort.”

“In fairness, this report doesn’t make the case that both prosecutors and all police are somehow racist,” he said. “But it certainly demonstrates that there’s a disparity, and there’s a consistent disparity in the sort of wrongful convictions.”

Andrea Headley, an assistant professor at the McCourt School of Public Policy at Georgetown, said the report’s findings were “a clear example of what I would call a ‘pipeline’ problem from police to courts and back again, especially considering accountability after misconduct is found.”

“Trust is rarely built with grand gestures,” she said. “But more about small moments that lay a foundation, either for the better or worse.”

Jeffrey Bellin, a professor at William & Mary Law School in Williamsburg, Va., and a former prosecutor, called the trial of an innocent person “the most important test of our criminal justice system.” He said it was not surprising that “when the system fails that test by convicting someone who is innocent, police and prosecutors are often implicated in that failure.”

“At the same time, this is a part of the problem that can most easily be fixed,” Professor Bellin said.

“Part of that fix, as I have written extensively, is cultural,” he added. “Prosecutors need to see themselves as part of a system that does justice, not as unilaterally responsible for convicting those who they perceive to be guilty.”

Who cares what garbage they have to say.

Put a look on your face of complete and utter shock.

Smile, knowing all is not lost as President Trump and Billy Barr have formed a commission to make sure this sort... ...of thing... ...will no longer happen!

OH, never mind, it turns out that a Federal judge John D. Bates, (appointed by Republican George W. Bush) has instructed the commission to temporarily suspend operations as they are not diverse, is not open to the public, comprised of law enforcement only...

In other words, That's the Trump/Barr much ballyhooed Law Enforcement Commission , violates the rules set forth in The Federal Advisory Act of 1972.


Okay, maybe it's time to weep for the disastrous state of nationwide affairs.

www.courthousenews.com/judge-rules-trumps-law-enforcement-commission-violated-federal-law/amp/
1 Reply
1
Reply Fri 2 Oct, 2020 03:02 pm
@Sturgis,
I'm at a point of my life between age, experience and cancer I have nothing to fear from anything or anyone. I will speak truth to power, truth to ignorance, truth to purposely stupid.