Forums: Movies, Harold Lloyd, Silent Films
Email this Topic • Print this Page
Reply Tue 5 Jul, 2005 11:51 am
Over the holiday weekend, I had the pleasure of attending a series of Harold Lloyd silent films at the Music Box Theatre in Chicago. I saw four films -- Speedy, The Freshman, Girl Shy and Safety Last -- which was an enormous treat. Apparently, this group of films (ten in all) is part of a retrospective series that is touring the country, so if you get a chance to see any of these films when they come around to your neighborhood, I strongly urge you to do so.

A feature article in the Sun Times that profiled Lloyd in connection with this film retrospective had two interesting bits of information:

Sony has the theatrical rights to virtually the entire Harold Lloyd library: shorts and features, silents and talkies. Lloyd also struck a deal with New Line for the DVD release of 28 titles, scheduled for later this year. *** But [Suzanne] Lloyd isn't willing to stop with simply reissuing her grandfather's classic films. She's also persuaded Sony to take on a remake of "Safety Last," a project she's had in mind for 3-1/2 years. No one has adapted a silent film from the '20s into a modern-day film, and it seems a huge leap in today's entertainment landscape.

The first item is indeed welcome (and long overdue) news. The major Chaplin and Keaton films have been available on dvd for some time, and even Harry Langdon's two best feature films are out on disc. I am extremely pleased to see that Lloyd's films will finally be released in this format.

The second item, on the other hand, is cause for some trepidation. The article is incorrect in suggesting that no one has adapted a silent film from the '20s into a modern-day film. Hollywood adapted Keaton's Seven Chances as the 1999 release The Bachelor, a movie which perhaps was so forgettable, or so execrable, that the article's author could be forgiven for failing to mention it. That dud may have proved that silent comedies simply can't be remade: they depend far too much on sight gags and split-second timing to be readily adapted to modern comedic conventions, which rely almost exclusively on dialogue. It's no coincidence, I think, that none of the major silent comedians (with the exception of Stan Laurel) had successful careers in talkies.

I can't wait to see the Lloyd films!
0 Replies
1
Reply Tue 5 Jul, 2005 12:43 pm
Hey, thanks, Joe -- I can't wait for the DVD release. He was one of the early silent comedians who played the role of a nerd which was basically Chaplain and Keaton's schtick (if you want to call it that). However, he was a suave kind of a nerd or, at least, liked to think so. I'd likely have to make a trip to L.A. to see a screening -- I'm willing to bet it could be one of my alma mater's film series entires, UCLA.
0 Replies
1
Reply Wed 20 Jul, 2005 06:24 pm
Harold Lloyd's films were so much more exciting than Chaplain's. What he did often seemed highly dangerous and I think I'm right in believing he did his own stunts? We don't see much of him here in Britain, but I have a memory of watching him in a film where he keeps trying to commit suicide, but whatever he does ends up failing and he finally gives in to life.
I'd like to know the title of that film if someone can tell me. Thanks.

Peace,
E
0 Replies
1
Reply Wed 20 Jul, 2005 06:45 pm
It's been many years sice I watched a Lloyd film. I'm ready.
0 Replies
1
Reply Thu 11 Aug, 2005 12:02 pm
TCM had a Harold Lloyd marathon possibly a year ago now. That was the first time I became aware of his work, and I enjoyed it immensely.
If I remeber correctly, he did do all of his own stunts. Adding to the danger in that, he was missing a finger on one of his hands and had some kind of awkward prosthesis in its place.

He was, in my opinion, the best. Even The Three Stooges take a major backseat.
0 Replies
1
Reply Mon 29 Aug, 2005 10:49 pm
Yeah, he did do his own stunts... which is particularly remarkable considering the lack of cables or wire suspension used in his scaling by hand (lacking a finger!) the sides of buildings three or four stories tall.

Now I'm trying to think of a third silent movie actor whose incredible dexterity was a huge part of his plotlines.. He was always being chased by huge mobs of people, he always got caught in the end... the name's gonna kill me... was it Langdon? I'll check... damn it..

Even The Three Stooges take a major backseat.

The Three Stooges were good, but the Marx Brothers were infinitely better. And it's close as to whether Lloyd is above them.
0 Replies
1
Reply Tue 30 Aug, 2005 02:17 am
When i was little , back in the 80's,Harold Loyd used to be on TV.It was a show I really looked forward to watching.
Make way for Harold Loooooyd do do do do, duh do do do do, Harold Loyd do do do..... a pair of glasses and a smiiiile.
How did he manage to hang onto that clock face!!!
0 Replies
1
Reply Tue 30 Aug, 2005 03:57 am
He actually did more work as 'Lonesome Luke', a Chaplin-knock-off, than he did as the 'safety' films. Of real note was his film "The Freshman" 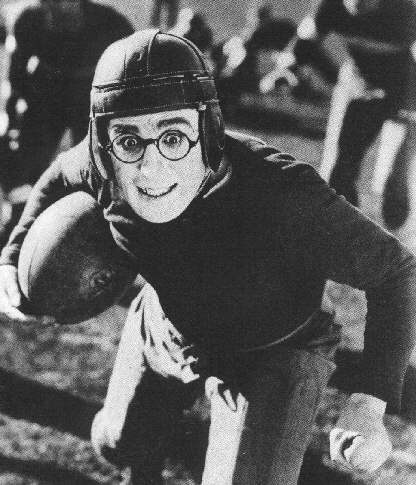 sadly, we may have the inspiration for...

Now I'm trying to think of a third silent movie actor whose incredible dexterity was a huge part of his plotlines.. He was always being chased by huge mobs of people, he always got caught in the end... the name's gonna kill me... was it Langdon? I'll check... damn it..

That pretty much describes most silent film comedians -- almost every silent comedy contains a chase scene. Perhaps you're thinking of Buster Keaton, who seems to have frequently been chased by large mobs (e.g. hundreds of would-be brides in Seven Chances, a herd of cattle in Go West, and I'll let you guess who chased him in Cops). I don't recall any Langdon feature where he was chased by a large group of people.
0 Replies
1
Reply Tue 30 Aug, 2005 08:48 am
That being chased by large mobs recalls how much of Harold Lloyd and Buster Keaton found its way into Scorcese's "After Hours."
0 Replies
1
Reply Tue 30 Aug, 2005 02:48 pm
There you go. Buster Keaton. I'm an idiot, he was already mentioned... That was him. Sorry...hehe..
0 Replies
1
Reply Thu 13 Oct, 2005 04:46 pm
lloyd had some frickin' grapefruits to do what he did in Safety Last.
either that, or he was certifiably mad... or both?
0 Replies
1
Reply Tue 18 Oct, 2005 09:38 am
Here's the latest news on the dvd release of Harold Lloyd's films -- and it looks like it will be better than even I optimistically hoped for! You can pre-order it now.
=======


Bonus Disc
=========
Rare, vintage interviews and home movies
Tributes and interviews with family, friends and legendary celebrities including Debbie Reynolds, Robert Wagner, Tab Hunter and director John Landis
Narrative chronology detailing the life and times of Harold Lloyd, hosted by Leonard Maltin
Video bios of many of Harold Lloyd's collaborators and stars of the golden age of cinema
Harold Lloyd Academy Award speech
USC's Delta Kappa Alpha tribute to Harold Lloyd hosted by Jack Lemmon and Steve Allen
3-D photos shot by Harold Lloyd himself (3-D glasses included)
Photo and publicity galleries
Radio shows
And more!
0 Replies
1
Reply Sat 31 Dec, 2005 10:26 am
I've been meaning to post a review of the Harold Lloyd dvd box set ever since I received it about a month ago (I got mine on the day it was released), but I've been too busy watching the films.

This is, without question, the best dvd set of the year. Don't believe me? Then how about this from the New York Times:

"The Harold Lloyd Comedy Collection," which ended up at the Time-Warner subsidiary New Line Home Entertainment rather than the parent company, would be my pick for the best boxed set of the year - a seven-disc collection that, though eccentrically arranged, brought together a generous selection of Lloyd's silent classics, including "Safety Last" (1923) and "The Kid Brother" (1927), with three hours of bonus material that included a selection of Lloyd's 3-D photographs.

The accolades are fully justified: this is a wonderful collection. Not only did New Line do a great job of restoring these films, but just the mere fact that it released any Harold Lloyd films was a major cause for celebration.

THE GOOD:
Scores: The second-biggest challenge when transferring a silent film to dvd is getting a good musical score. A studio can do a fabulous job of restoring the picture (the biggest challenge), but if the musical score is no good, then the film can be rendered unwatchable, regardless of the quality of the restoration. I'm extremely pleased, then, with the scores for these films. I'm familiar with Carl Davis and the wonderful work he has done in scoring silents, including Safety Last. I had never heard Robert Israel's work before, but his scores (for most of the other films in the set) are, if anything, better than Davis's. In particular, I was impressed by Israel's use of "Collegiate" and "Freshie" in the score for The Freshman: "Freshie" was written for and performed at the premiere of The Freshman by Fred Waring's band, so its inclusion as a motif in Israel's score was particularly apt.

Selection: All of Lloyd's feature films between 1922 and 1936 are here (except for Welcome Danger, a problematic film), and several of his post-1919 silent shorts are included as well. This was the period of Lloyd's "glasses character," which represented his best and most well-remembered work (we will have to wait for a compilation of his "Lonesome Luke" shorts).

Extras: I haven't viewed all of them yet (still haven't looked at the 3-D pics), but the ones I've seen are pretty good. In particular is a featurette with Carl Davis and Robert Israel talking about the particular challenges of scoring a silent film. The commentary track on Safety Last with Leonard Maltin and Lloyd scholar Richard Correll is informative.

THE NOT SO GOOD:
Organization: As the New York Times review noted, the arrangement is rather haphazard. It would have been good to arrange the titles chronologically, but then the individual volumes are also sold separately, so New Line must have wanted to put a "blockbuster" film in each volume.

That's about it for the not-so-good. Really, this is a must-have for fans of silent comedy and students of cinema.

We don't see much of him here in Britain, but I have a memory of watching him in a film where he keeps trying to commit suicide, but whatever he does ends up failing and he finally gives in to life.
I'd like to know the title of that film if someone can tell me. Thanks.

Haunted Spooks (it's part of the dvd compilation -- I just watched it this weekend).

I broke down and ordered the set. Can hardly wait.

Thanks for that, Joe.
You've made my day.

Well, it only took about five months, but I'm glad I could finally answer your query. By the way, that suicide sequence in Haunted Spooks is pretty funny: you should try to get your hands on the dvd if you can.
0 Replies