Forums: Australia, Humour, Political Cartoons
Email this Topic • Print this Page
Reply Fri 17 Jun, 2005 06:20 am
Please Pardon me for this indulgence, but I keep coming across hilarious Alexander cartoons that often don't quite belong in any particular existing thread. I'll keep passing them as I find 'em. You'll have to be Australian to get most of these.
Type: Discussion • Score: 0 • Views: 4,132 • Replies: 35
No top replies
1
Reply Fri 17 Jun, 2005 06:24 am

He's our Minister for Foreign Affairs.
0 Replies
1
Reply Fri 17 Jun, 2005 06:36 am
Another Wood comment. That's Alexander with Oz prime minister, John Howard, leading the victory parade. Everybody & their dog has been falling over themselves here, taking credit for Wood's rescue from his Iraqi hostage takers. It's been a wonderfully diverting story for the government which has been in all sorts of strife over dissent in it's own ranks over detention of asylum seekers. The thing is, Wood (whose been living in the US for yonks) seems to think he was rescued by US forces. "God bless America" was reportedly one of his first comments on gaining his freedom. :lol: :

0 Replies
1
Reply Fri 17 Jun, 2005 06:48 am
Alexander's delicate dealings with the Chinese government over the extremely embarrassing defection of a Chinese diplomat from the Chinese embassy in Canberra. The poor man was in hiding last we heard. (The diplomat, that is.):

I thought it was Iraqi forces in the front taking the credit and making their credibility look good for propaganda purposes, bless 'm, and the Americans doing the real work?

You hafta laugh, really you do.

I thought it was Iraqi forces in the front taking the credit and making their credibility look good for propaganda purposes, bless 'm, and the Americans doing the real work?

You hafta laugh, really you do.

Great outcome for the poor fella himself, though.

Yeah, it was the Iraqis that found him, but we should never let facts get in the way of a good bit of spin, Deb.

And Mr Wood has two very nice, level-headed Oz brothers, too! Actually, I was more impressed by them (on TV last night) than I was by him. Sounds like a bit of an adventurer in Iraq to make some quick $$$$$.

But we've got to see him as an Oz hero & every Oz person who was even remotely involved as heroes, too! Hooray for us!

But hey, there's so much US stuff here about nitty gritty aspects of issues that I don't really get, so why not? :wink:

He's still around & I post his stuff here, often. I liked his old cartoons, which were often quite rude & wicked, a lot better than much of his current stuff, though. Leunig got religion & became a lot more serious, sadly.

Rather like the cartoon book dlowan sent me years ago. Leuig? or something like that. You really had to have the right background.

I see him as very universalist.

Lots of overseas friends love him.

It's just a matter of taste & preference, goodfielder. My preference is for the wonderful, biting stuff that Leunig used to do in his Nation Review days. Often wickedly funny. I still like some of his work, but really miss the "old" Leunig, that's all.

I think I still have some (probably yellowing) copies in some of my boxes (I've moved house quite a number of times in the last ten years and cart much of my past lives around with me).

<sigh> It sustained me through many bad, bad political moments. But hey, I never, ever thought that things could get as poisonous politically as they are now in Oz. Where is our Nation Review of 2005? We need it! In some ways I wish I could be like Leunig & take a little refuge in religion, but I'm certain I couldn't carry it off with any real conviction.

So good for him, but I do notice he has his moments of overwhelming Howard-inspired anger & fury. And hooray for that! It certainly beats a lot of the "political analysis" that's coming out of Canberra. But it's the wickedness & rudeness that I sorely miss. <sigh> We should have more of that in our lives to stay sane in these ugly times.
0 Replies
1
Reply Sat 30 Jul, 2005 10:09 pm
another great Alexander moment! 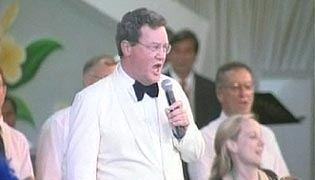 Foreign Minister Alexander Downer sings at the ASEAN annual conference in Laos. ABC TV
http://www.abc.net.au/news/indepth/featureitems/s1426537.htm
0 Replies
1
Reply Sun 31 Jul, 2005 04:39 am
I have to admit - I was inspired. I nearly took myself to a karaoke club to pay homage to Alexander, but I held myself back. And I have to say the patrons of a small karaoke club in Adelaide don't know how close they came to disaster