hoping for a bigger drop than that tomorrow.
it's currently 85ºF here...

we have more rain moving through this weekend.

I did see the storm sky and settled in, in expectation. Not a drop of rain at my place.

This is the first I'm hearing of it.

weather channel claims the low tonight will be 67F after the storms roll through -- a 25 degree drop from the expected high.

we've been 90 or higher for six straight days, something that just doesn't happen up heeyuh very often...

just in time for the next round of rain to start ... literally

At one point the clouds formed what looked just like a worm hole in the sky. Got home just in time as the large raindrops started to fall.

PNM is reporting numerous power outages and saying the storm is hampering its ability to respond.

"As soon as it is safe to do so we will assess the damage and give more information on outages," PNM said on its Twitter feed.

The storm may last for several hours, said KRQE News 13 Chief Meteorologist Mark Ronchetti said. Two inches of rain or more are possible and may fall quickly increasing the risk from flash flooding, he added.

KRQE News 13 is receiving numerous reports of downed power lines and wind damage as well as calls from people concerned that a tornado warning had been issued. The National Weather Service has not issued a tornado warning with this storm.
1 Reply
1
Reply Fri 26 Jul, 2013 08:43 pm
@Butrflynet,

Bryon (KOAT) reports 89 m.p.h. wind gusts in the metro. The ground crew at Isotopes Park tried to cover the field with a tarp, but the wind was too powerful. 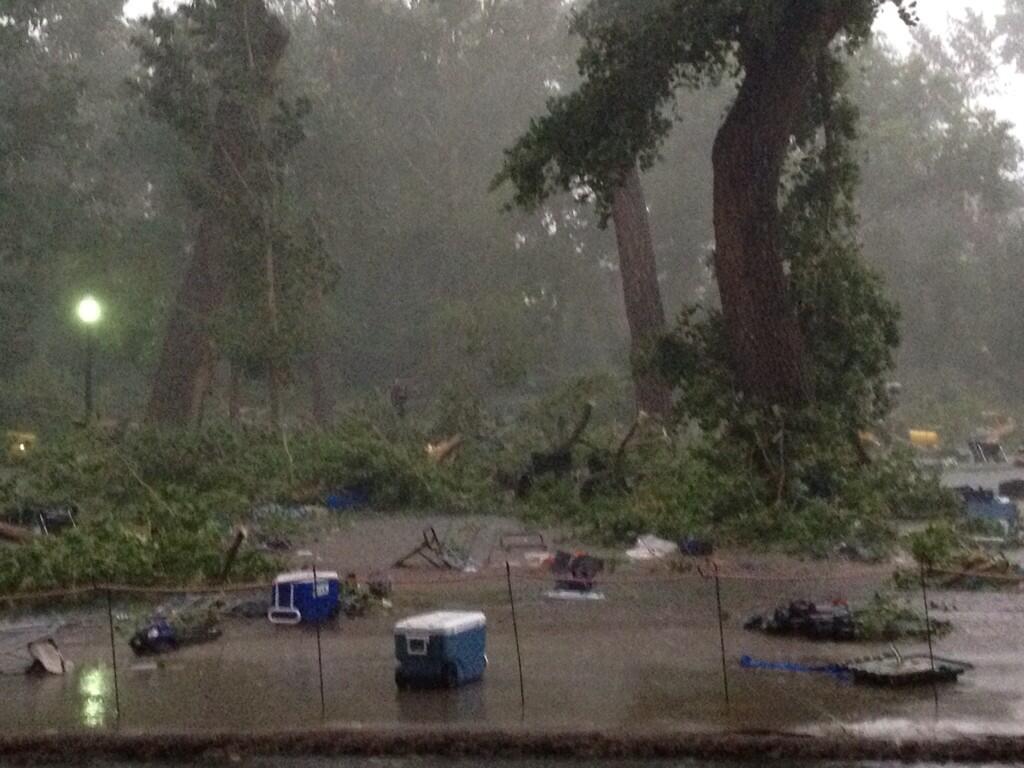 Wind damage at the Albuquerque Zoo.

Its over , we only got about 1 and a half inch but it was welcome for the last cutting of hay and the soybeans that are now ripening.
1 Reply
1
Reply Thu 12 Sep, 2013 05:47 pm
@farmerman,
blah blah...FL lightning capitol of US...blah blah..regular evening light show...boomers galore by day.
1 Reply
2
Reply Mon 18 Nov, 2013 05:18 am
@Ragman,
Had a huge set of storms overnight. Wind and strong rain , some lightning. The dangerous "white Hurricane" storms blew themselves out in Ohio as the "box winds" in the upper atmosphere began to shear off . The really intense storms were in Illinois and Indiana. I hope that our midwesternern members are ok. How were these storms recd in lower Canada? any effects at all?

Now we weill probably see some lake effect snows as the winds assume a line and lose rotation.

6 people killed (it would have been worse but , unlike Moore Oklahoma, these people had BASEMENTS.

These "end of summer" style storms always scare me around here because we get these line squalls that are remnants of the white hurricanes and we may have impliments laying out in the fields that become targets to get blown around and we don't usually keep the cattle in the stone barn so they can get hit by debris and sometimes cut badly.
This is an annual event in the Midwest and east nd seems to get a little worse each decade as climate change gets more pronounced
0 Replies
2
Reply Mon 24 Feb, 2014 08:15 pm
I just learned something new - I'd not heard of thundersnow et al, or at least I don't remember hearing about it -
link = http://www.theguardian.com/news/2014/feb/24/weatherwatch-electric-snow
The article is short, so for a change I'll copy all of it. 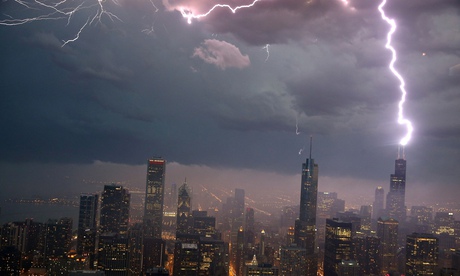 The Willis Tower in downtown Chicago provides a focus for the electrical field, with spectacular results.
Photograph: Scott Olson/Getty Images

Hot weather often brings dramatic thunderstorms. They are less common in winter, but there have been an unusual number over the past few months.

In this country, heavy rains have been accompanied by thunder and lightning, and the US has seen a spate of rare electrical snowstorms, known as thundersnow. Scientists have been studying these unusual winter phenomena with special radar and other sensors.

Christopher Schultz of Nasa's science research office has found that lightning is typically associated with heavy snowfall of around 5-7 centimetres an hour. The conditions for electrification are complex, depending on temperature, humidity, and the presence of supercooled water droplets and ice particles.

Individual particles pick up positive or negative charge and fall at different rates. When masses of positive and negative charge are separated far enough, electrical breakdown of the air occurs, and this is accompanied by thunder and lightning.

In cool winter storms there is less vertical air motion than in warmer summer ones. This means the area of charge separation tends to be a large flat sheet or band, resulting in horizontal lightning. This can be triggered when the band passes over a tall structure such as a television transmitter. High buildings such as the Willis Tower in Chicago may also extend into the cloud base and provide a focus for the electric field.

Lightning is initiated at this point and travels horizontally though the band; it may terminate at another tall structure, sometimes more than 70km away.