REALLY? You see everything as entropy?

I was just trolling ya. But yeah, everything is entropy except for biological life.
To violate entropy requires too much intelligent design. Like what Elon wants to do on Mars. If his plan doesn’t work out in the long run, some future scientist a billion years from now will land on Mars and write a paper on the evolution of the Starship. They will probably find earlier fossils of Rover, Curiosity, etc. to prove the theory.

As far as those finch beaks, why wouldn’t an intelligent designer put regulatory gene structures into animals so they could cope with predictable environmental changes and different locations? You know, epigenetics. But it’s a bit much to expect it to turn into a whale though. Too many architectural changes and unique proteins needed for that. Might as well start with something closer.

Oh ****, I can already hear guys down the hall bleating about the crappy human eye design and I’ll have to explain all over again why all physical designs are compromises. Math people have it all over us materialists, proof is so easy for them.

Using evolution in its full meaning does nOT preclude considering human invention and improvement on stuff that Rev Paley would recognize. What we should NOT adopt however, is the concept of natural selection or genetic drift or gene flow (which sounds like a contrived term on its own)
0 Replies
3
Reply Tue 10 Mar, 2020 10:07 pm
Paley's crap always amused the hell out of me. Cicero. well over 2000 years ago, wrote: When you see a sundial or a water-clock, you see that it tells the time by design and not by chance. How then can you imagine that the universe as a whole is devoid of purpose and intelligence, when it embraces everything, including these artifacts themselves and their artificers? This tells us several things, not explicitly, but implicitly. As this came from Cicero's On the Nature of the Gods, it tells us that doubt or indifference to the idea of gods was common enough to lead Cicero to an attempt at refutation. It also tells us that the teleological argument is very old. It dates back, in fact, at least 2500 years. It may be older, but if so, we have no record. It also tells us that theistic systems did not command an authority sufficient to drive skeptics underground (it would be necessary for murderously fanatical religionists such as the christians for that).

Any way you look at it, though, the teleological argument is a bankrupt idea. It does not rely on demonstrable evidence, but simply on "look around you, who created this?" This is the naïve assumption of primitives who themselves make things, and therefore assume that "someone" made everything around them.

It also tells us that theistic systems did not command an authority sufficient to drive skeptics underground (it would be necessary for murderously fanatical religionists such as the christians for that).

What!? You're 'underground' now? As I look around in the A2K universe, you guys have fully emerged from your caves. Open your eyes man, you’re bloody popular!
0 Replies
1
Reply Wed 11 Mar, 2020 04:59 am
And who is this 'Paley' guy? You better not be smearing me again via association. I told you, this is all between me an you.
1 Reply
1
Reply Wed 11 Mar, 2020 08:07 am
@Leadfoot,
Reverend Paley, in early 1800's stated probably the most compelling argument for "Intelligent Design" without mentioning a supernatural being (although left to the reader the assumption was fairly clear that this was where he was going)
1 Reply
1
Reply Wed 11 Mar, 2020 12:55 pm
Early Earth was covered in a global ocean and had no mountains

I get the same treatment you say Paley got. They say it’s got the unmistakable scent of divinity all over it. Maybe, but That’s just a bonus, no charge for the aroma therapy. Or, you can hold your nose while discussing I D. No offense taken.

And yes, unlike birds living today, many birds from the Mesozoic had teeth.
0 Replies
1
Reply Thu 19 Mar, 2020 10:56 am
https://www.inverse.com/science/oldest-ever-bird-fossil-discovery-explains-how-they-outlived-dinosaurs
We aren't sure how it might have tasted, but a fossil bird paleontologists are dubbing the "Wonderchicken" has earned the distinction of being the earliest example of modern birds known to science.
0 Replies
1
Reply Fri 27 Mar, 2020 12:42 am
Fossil of 67m-year-old raptor dinosaur found in New Mexico 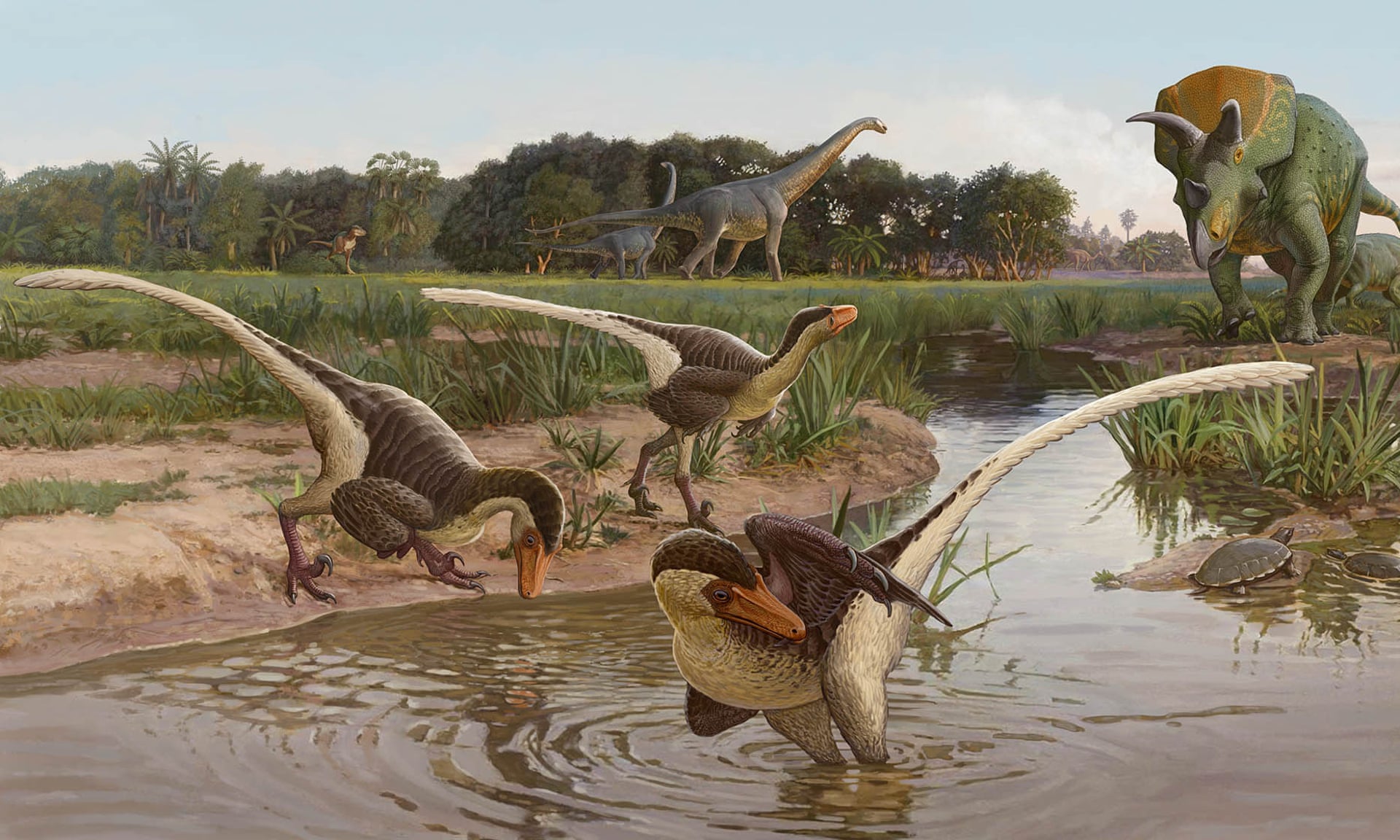 A meat-eating dinosaur with a feathered body, iron grip and a tail for agile pursuit of prey, has been discovered by fossil hunters, revealing that raptor dinosaurs were thriving right up to the point the asteroid struck, 66m years ago.

The remains, comprising about 20 bones, were found in the San Juan Basin in New Mexico, in rocks dating to about 67m years ago. They are believed to be from a type of dromaeosaurid – a family of theropod dinosaurs that includes raptors – which appears to have been a close cousin of the velociraptor.

Dubbed Dineobellator notohesperus – a nod to the indigenous people of the region, the Navajo, the latin word for warrior and the south-western US location it was found in – the animal would have been about two metres in length, weighed about 18-22kg, and been covered in feathers.

Jasinksi noted that while dromaeosaurids were present in both Asia and North America about 125m years ago, there are few fossils from the period that followed, with more recent remains discovered primarily in Asia.

“It looks like the ancestors of Dineobellator would have basically migrated from Asia and then diversified once they got back to North America at the very end of the Cretaceous, right before they went extinct,” said Jasinski (Dr. Steven Jasinski, of the University of Pennsylvania and a co-author of the research).

more...
1 Reply
1
Reply Fri 27 Mar, 2020 03:58 am
@InfraBlue,
Look at that! I can see them evolve into ducks and chickens right before my eyes!
2 Replies
2
Reply Fri 27 Mar, 2020 06:22 am
@Leadfoot,
Stupidity also evolved.
1 Reply
1
Reply Fri 27 Mar, 2020 06:41 am
@edgarblythe,
How ya doin Edgar?
Has the CV affected your life as little as mine? Ancient Life is great when you’re up here ain’t it.
0 Replies
1
Reply Fri 27 Mar, 2020 09:24 am
@Leadfoot,
Birds evolved in the late JURASSIC, By the end of the CRETACEOUS we already see that , as a bio CLASS had broken into more than half of the 33 orders we see today . These specis are now classed as a member of Maniraptora , sort of "Stem birds" . New thinking is that the maniraptora evolved from reptiles and included the Dromeosaurs.
The stem birds included some "Dinosaur like two leggers" most with feathers . There were four classes of early fossil birds well before these specimens were found. These guys were probably part of the Paleognathids lines. Weve got about 4 or 5 different species of early birds already existing in the late Jurassic , all of these were like Archeopteryx lithographa. The important thing is that many "stem"species didnt go extinct after a new class appeared, they hung around for tens of millions of years in many cases.(why, is another BS session)

We use to think that mammals were all descendants of stuff like Mormoops or Dimetrodon when it appears that they too were a "stem genera"
Basically, cutting to the bottom line birds evolved WITH dinosaurs, probably not from them.

Thats really what the fossil record shows us and newspapers get it fucked up all the time (I hate science reporters-we should give all science reporting to the sports reporters, who worry about FACTS first and they make up a pretty good story ONLY AFTER THE FACTS ARE IN.) ( Science reporters IMHO do just the opposite.)

BUT anyway- when a new phyla appears we normally first see a "bunching up "of species that could serve as models of intermediaries when , in rality, evolution is a complex reaction more like a BEEF STEW than just a broth. Natural selection, mutation, genetic drift, and adaptive radiation seem to be an interwoven bunch of methods by which species can transfer their "Specie-hood" around. Really, the big news today IMHO, is the modes of transfer of genetic material (and whether evolution even first needs genetic modification ) DOes it follow Lynn Margulis rule of genetic transfer at the microbiome level only, is it a mixed bag, or is it only adaptive (Of which Richard Dawkins seems to be the most vocal ).

I like the news that comes with the fossil record. Fossils are, to me, a TOOL with which we can focus in on searches for specific resources, and here we have a new one. a fossil species that had a wide range and a short time in existence is the BEST at using to quickly ate and place ourselves into a specific environment. The rest i a philosophical/religious argument and is important mostly to people who arent in the field of endeavor.

Jasinski is also the head paleo curator at the Pa STate Museum. Hes always on th road tween Philly and Harrisburg. He wa going to met with us two weeks ago but some other piece of genetic material got in the way. Hes found some really neat fossil fish in the upper Devonian of N Pa .

1 Reply
1
Reply Sat 28 Mar, 2020 02:24 am
@farmerman,
Yes, of course the stories and 'artists impressions' in the media are rediculous from a scientifically enlightened POV. But they serve an important function for the masses. We must prepare their minds so that the stories of small land mammals turning into whales, etc. will not sound so absurd to their uneducated minds. By this method, We inoculate them against the pernicious deceit of theological belief.

BTW, you realize that the only one who misrepresented bird evolution was you. Jasinski clearly states that these were dinosaurs , and in no way an ancestor of any bird.

1 Reply
1
Reply Sat 28 Mar, 2020 05:46 am
@farmerman,
Come on farmer, you know they mostly only look at the pictures. Sometimes even the headline. But mostly they just parrot things their preferred 'expert' or collage prof. said.

As for 'sin', I already defined it as 'denial of reality'.

1 Reply
1
Reply Sat 28 Mar, 2020 06:11 am
@Leadfoot,
Ive always wondered and you successfully keep ducking, On what basis do you deny evolution?? I dont mean theistic ID driven, youll NEVER come up with any evidence with that one.

SCience makes us reserve our opinions until the evidence is in. You seem to operate on another , and totally different "Basis of fact", the basis of which appears to be embracing a "studied ignorance".
You try to use isolated facts to underpin your beliefs but fail to even understand the connected line of facts.

Your ridicule of whale evolution for one, Youve got a rather imperfect understanding of the interconnectedness of its fossil record but that doesnt stop you.


"looking at pictures" usually leads to questions and questions often lead to better understanding . Face it, youd just rather our kids be taught complete hokum and fairy tales . All sciences are interconnected in that they should all eschew fairy tales and legends as bases of fact. .