Forums: Ancient Life, Science, Evolution
Email this Topic • Print this Page
Reply Wed 2 Oct, 2019 09:31 pm
I am looking for posts about life forms from the past.

I am looking for posts about life forms from the past.


You mean like Gustav Rastenhoffer, or whatever his name was? We haven’t seen him for a while.

Slime has been present on Earth for a very long time—almost 2 billion years, according to a recent reassessment of fossil evidence.

In a study published this month in the journal Palaeogeography, Palaeoclimatology, Palaeoecology, UO geologist Greg Retallack and Xuegang Mao of China's Fujian Normal University confirm that a fossil from Western Australia is the planet's oldest known land-dwelling slime mold.

The fossil in question, Myxomitodes stirlingensi, is a hairpin-shaped trace of biological activity found in the rocks of the Stirling Range, a mountain region 200 miles southeast of Perth. Long the subject of scholarly controversy, the fossil has sparked debate both about the specific life form it represents as well as the paleoenvironment it inhabited.

"They have been interpreted as trails of metazoan animals and often as marine organisms," said Retallack, who is director of the Condon Fossil Collection at the Museum of Natural and Cultural History. "Though they resemble animal trails they probably were not. Slime molds make similar trails but lack any animal organization: no mouth, no gut, no anus, no nerves, no veins. And we are seeing these fossils at the surface of ancient terrestrial soils, making them additional evidence of life on land during the Paleoproterozoic Period."

Retallack said that while slime molds are not themselves multicellular, they might hold important clues about how multicellular organisms evolved.

"Myxomitodes were amoebae that live dispersed in soil, but these traces of their movement demonstrate that they could coalesce into a slug that wandered over the soil as a unit, possibly to sense better feeding opportunities or a place to sporulate, and then disaggregate once again into single cells," he said. "This may demonstrate an early stage in the evolution of multicellular creatures, bridging the gap between microbes and more complex life forms." 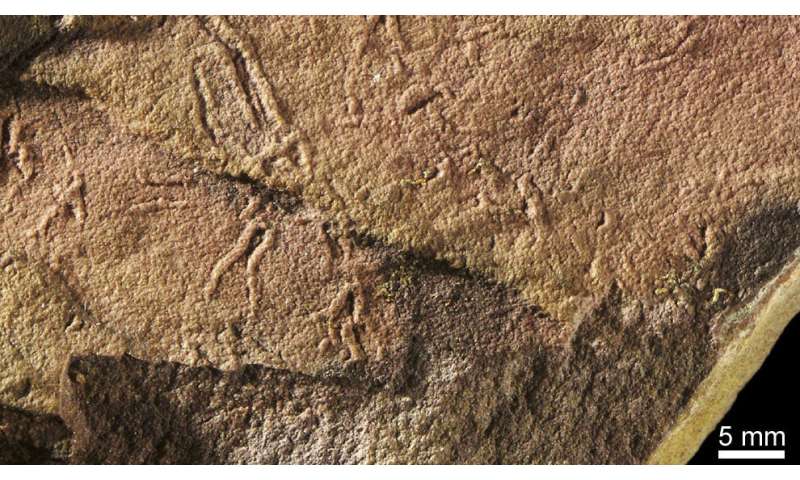 1 Reply
1
Reply Thu 10 Oct, 2019 12:16 pm
@farmerman,
Did it also go to the dark side?
0 Replies
1
Reply Thu 10 Oct, 2019 12:18 pm
1 Reply
1
Reply Thu 10 Oct, 2019 10:12 pm
0 Replies
1
Reply Fri 11 Oct, 2019 09:08 am
@edgarblythe,
An argument about hen the chordates first appeared in the fossil record has been somewhat lleaning to a date o around 560 Million years ago (about 20 my before the "Cambrian Explosion". I have no dog in the fight but weve been tossing around the stratigraphic boundaries of the"New Cambrian" with a critter known as Emietta. It way before Pikaia (found in the Burgess shales of the mid Cambrian).
I GAF. redefinition of paleostrat sequences are becoming fashionable in oil field geology but my eyes just start glazing over. I say we should turn all paleontology studies and memorization over to 7 year olds, they all love "Monsters"
1 Reply
2
Reply Fri 11 Oct, 2019 10:47 am
@farmerman,
I have a hard time keeping any of what I see and read in a semblance of order. I am just thrilled that they can find so many clues and present us with a tapestry that makes sense (broadly speaking).
1 Reply
1
Reply Mon 14 Oct, 2019 07:13 am
@edgarblythe,
edgarblythe wrote: