Forums: Quotes, Life, Positive, Inspirational Quotes, Motivational Quotes
Email this Topic • Print this Page
Reply Mon 8 Jul, 2019 01:43 am
You can close your eyes if you can't bear to see it. I want to see everything.

Do not attack opposing team's goal, but in their minds you will win the goal automatically.

Team need only those players who first play for India, then for their teammates and then if they hav any life left, for themselves.

You can close your eyes if you can't bear to see it. I want to see everything.

Do not attack opposing team's goal, but in their minds you will win the goal automatically.

Team need only those players who first play for India, then for their teammates and then if they hav any life left, for themselves.

You do'nt need strength to make a team. You need team spirit.


You forgot one...:
You can spit out platitudes all day long and at the end of the day? You're mouth will be dry as a desert. 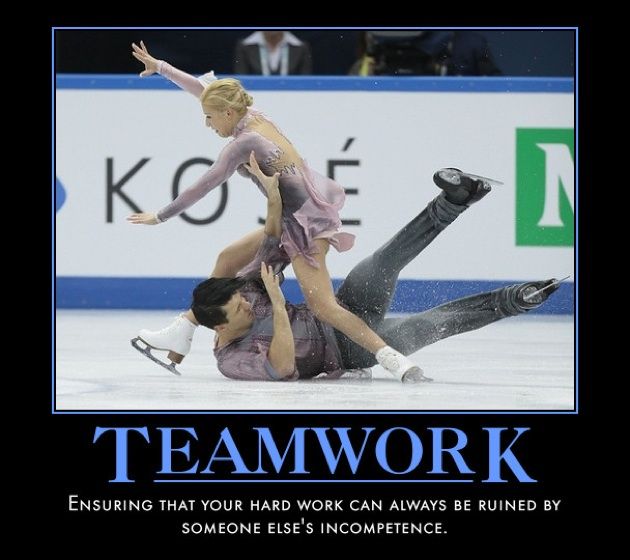 I want to gag at all the corporate events I had to work at. Also the smaller, quarterly regional meeting for my area.

The ceo riding into an event on horseback wearing his 3 muskateer costume, which was his pet "team building" schtick. One for one and one for all don't you know.

The cfo riding into the filled hall on a 1950's style bike. Don't know what that was about.
Some guy who I don't even know his title, but was dubbed "yoda". Oh right, he was "chief wisdom officer" He would always show up on stage with "low rider" blaring on the PA system.
All this touchy feely crap which would pathetically put a temporary sparkle in the eye of some employee (oh...I'm sorry, "team member") who had maybe never been on a airplane before, or eaten at the ubiquitous lunch salad bar or evening chicken breast or sirloin. Then, after eating the Marriotts crap food, the big Awards ceremony!

Even worse were the 2 day meetings just for the managers. The zip line courage lesson. The "write something you want to send out to the universe on a slip of paper", then in a ceremonious manner, all line up to toss the paper into a gigantic chiminea. Most of the managers weren't taken in by this stuff, but hey, ya gotta play the game.

I was only a cog in the wheel, but I was a cog that knew when all the upper ups were having the real phone conferences. If I was alone in the office, which was often, I would dial into the conference line before I knew others would start calling in. So they wouldn't know I was listening in. And boy, did I hear a lot.

1 Reply
2
Reply Mon 8 Jul, 2019 03:16 pm
@chai2,
When I worked at the home office of a large insurance carrier which shall remain nameless, I would overhear tons of meetings. Half the time, I wasn't even trying. But those yahoos would leave the door open, even when they were talking about layoffs. I recall hearing some of that and my desk mate (we kind of worked at a table-thing) Sharon turned to me and whispered, "Did I just hear them say they were closing the Maryland office?"

Yeah, they were that careless with people's futures. And they had the gall to try to tell people that everything was hunky dory because those people had jobs in the new Charlotte office. Charlotte is lovely, but what the hell were those people supposed to do if their kids were in good school districts, or they couldn't leave elderly parents, or they owned their homes and wanted to keep them -- or their spouses had great jobs and didn't want to just leave them?

Shifting gears -- I interviewed at a big touring company several years ago, and it was a big group interview where we had to answer a ton of stupid touchy feely questions. We also had to make a cradle for a raw egg with a bunch of plastic straws. I was there for a damned data job -- it didn't matter if I was rah-rah about their tours to Egypt or wherever.

Didn't get that job, and then interviewed with them again a few years later. The "challenge" hadn't changed, so I immediately knew how to protect the stupid egg.

We also had to make a cradle for a raw egg with a bunch of plastic straws.


What the actual f*ck?

Honestly? I think part of it is seeing how far a person will go to degrade themselves to get the job, so you can count on how much sh!t you can feed them once they get hired.

Yeah, and the carelessness of how they handle others lives. Very true.

I want to think that no one would be really surprised at the degree of actual disregard toward the people that just want to work their job, get paid, and go live their lives.

I've never in fact watched the show, but from what I've heard of it, the corp world is like Game of Thrones.

Whenever I watch a movie where some charasmatic leader is jazzing up the men so they are willing to run into the middle of a field and get hacked to death by the other army, I think about how I'd be the one slipping out the back. There I'd be when the dust settled, foraging for dandelion greens and tending my goat, content.