Forums:
Email this Topic • Print this Page
Reply Tue 7 May, 2019 06:43 pm
This is the way Islam is taught in Muslim lands. Not only Muslim lands here in America. This happened a couple days ago.

The videos showed school children singing along and gesturing in a light choreography with a "Birds of Paradise" song that says, "The blood of the martyrs is calling us," and urges revolution "until we liberate our lands ... and we crush the traitor."

"We will chop off their heads, and we will liberate the sorrowful and exalted Al-Aqsa Mosque. We will lead the army of Allah fulfilling His promise, and we will subject them to eternal torture."

The videos from the event have been removed from Facebook.

This how Islam was intended to be taught. Hard to fathom how many children are taught this hate, not only here, but all over the world. Killing your enemies is political not religious. This is an ideology taking advantage of a religious facade.

Time to call this out.

The country of Qatar owns that website. Gives the impression Philadelphia is on the mark.
https://creepingsharia.wordpress.com/2018/05/24/qatar-ramadan-is-month-of-jihad/
0 Replies
0
Reply Tue 7 May, 2019 08:26 pm
How is this different than White Christian children being taught that Jews are animals?There is more violence from White Christian Racists than there is from any other group in the US.

These are the true violent extremists. 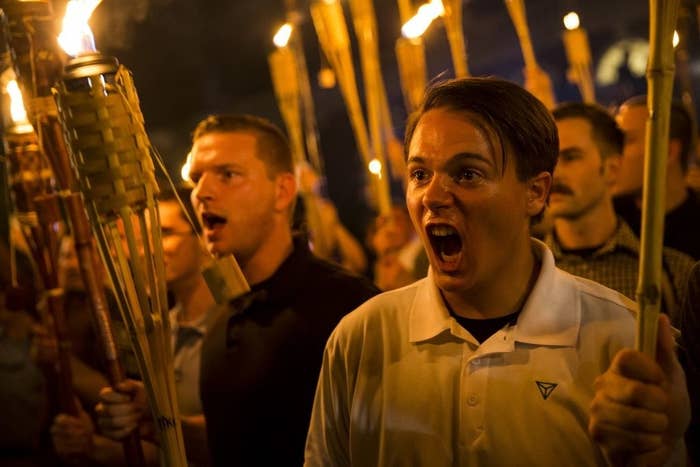 2 Replies
0
Reply Tue 7 May, 2019 08:34 pm
@maxdancona,
Talking about Islam. I am not going to let you change the subject to "hey look over here". People wanting to be Nazis has nothing to do with what Islam teaches. As you can see it teaches violence and hate.

If you have something that says this is not Islam, present it, or get the Hell out.
They are doing it or have done it too means 0.
2 Replies
0
Reply Tue 7 May, 2019 08:37 pm
@coldjoint,
We are actually talking about your bigotry. You are here to hate Muslims and so nothing else matters.

You are being a hypocrite. Let's be honest about what is really going on here. If a White person is a terrorist... you seem to not have a problem with that.

At least be consistent...

We are actually talking about your bigotry.

No, we are not. We are talking about what these kids are being taught. Is it bigoted to oppose this hate? And being taught in a free country. You are not capable of discussing why Islam is Islam. You want to transfer the blame where it does not belong.

So in short, who or what you think I am will not change what Islam says. Your continued willful ignorance shows you are scared to admit I am right. You do a disservice to everyone who ever died for freedom.

1 Reply
-1
Reply Tue 7 May, 2019 08:56 pm
@coldjoint,
Do you are about what White Christian racist kids are being taught? White Supremacists and racists are to blame for more violence in the US than any other religious group.

There is nothing for you to be right about, you are spreading bigoted hatred.

There is nothing for you to be right about, you are spreading bigoted hatred.

That is what Islam is doing and what I am telling you about. How dense are you? Bigot is no answer. You are useless here, please leave. We all know you think I am a bigot. Which has 0 to do with Islam.


1 Reply
-1
Reply Tue 7 May, 2019 09:05 pm
@coldjoint,
This is a bigotry thread. It isn't about Islam. The only reason that we are discussing Islam is because your bigotry is about Islam. But the issue here is about your bigotry. You could have the same ethnic hatred toward any group.

1) It would be very easy for you to find Christian churches in the US advocating violence toward Jews, the government in general, and other ethnic groups.

2) It would be very easy for you to find passages from the Christian Bible that you could use to "prove" that Christianity was a religion of violence.

3) It would be very easy for you to find recent stories of Christians in the US who call for and commit acts of violence.

The fact that you hate Muslims and not Christians is coincidence. It is probably a bit easier for you to hate Muslims because they are an ethnic minority and they tend to have brown skin. Bigotry is bigotry either way.
1 Reply
1
Reply Tue 7 May, 2019 09:16 pm
@coldjoint,
coldjoint wrote:

I am not going to let you change the subject to "hey look over here".

It isn't about Islam

Yes it is. You make no rules on my thread. Now tell me one thing positive in Islam for the non-Muslim. Or tell me why all the hate in the Koran and Hadith means nothing. If you can't, and you can't, you should not be here.
1 Reply
1
Reply Tue 7 May, 2019 09:22 pm
@InfraBlue,
Quote:


What logic is involved in denying what Islam says and teaches and trying divert the subject? You have established you are an apologist already, and a piss poor one at that.
1 Reply
1
Reply Tue 7 May, 2019 09:24 pm
@coldjoint,
Name one thing positive in Christianity for the non-Christian. Or tell me why all the hate in the Bible means nothing.

This thread is about bigotry. The things you are saying about Muslims is very similar to the things that were said to slander Jews, Catholics, the Chinese and many other ethnic minorities.

It is pretty standard bigotry.


What logic is involved in denying what Islam says and teaches and trying divert the subject? You have established you are an apologist already, and a piss poor one at that.

Name one thing positive in Christianity

My last reply to you on this thread. This is not about Christianity, it is rapidly becoming you trolling the tread answering questions with questions. Beat it.
1 Reply
1
Reply Tue 7 May, 2019 09:28 pm
@InfraBlue,
Quote:

What's up with Justin Trudeau lately?

Nothing huh? I told you suck at apologizing.

0 Replies
1
Reply Tue 7 May, 2019 09:29 pm
@coldjoint,
I am pointing out that this thread is about Bigotry. You can say whatever hateful, bigoted thing you want here. That is free speech. I get to point out what it really is.

This is just another example of bigotry. You hate the Muslims. Neo-Nazis hate Muslims. I would love to hear how you think your hatred of Muslims is any different than anyone else's.

0 Replies
0
Reply Tue 7 May, 2019 09:37 pm
To anyone who reads what the troll says and believes have a serious problem with reality finding fault with a messenger. Unable to admit that this is an enemy that will eat them alive if given the chance. Again, their (Islam's) literature tell Muslims and anyone else Islam's intentions.

... an enemy that will eat them alive if given the chance.

This bigotry is quickly unhinged... He is describing animals....or zombies rather than human beings. The idea of bigotry is to dehumanize the target. Who is he talking about who wants to eat White people alive? The nice elderly woman living down the street? The engineer working for Apple? The girl in my child's middle school class?

The "Islam's literature" is nonsense... what he does with Muslim scripture can be done with the Bible. You can twist any scripture. You get to decide for yourself what the Bible really says.

For anyone reading this... ask yourself this question. How is Coldjoint different than any other bigot through history who hated Catholics, or witches, or Jews, or people of African descent or people from China? It is really just more of the same.

The Quran Dehumanizes Non-Muslims
and Says that They are Vile Animals
The Ayatollah Khomeini, who dedicated his entire life to studying Islam, said that non-Muslims rank somewhere between "feces" and the "sweat of a camel that has consumed impure food." Small wonder. The Quran dehumanizes non-Muslims, describing them as “animals” and beasts:

Those who disbelieve from among the People of the Book and among the Polytheists, will be in Hell-Fire, to dwell therein (for aye). They are the worst of creatures. (98:6)

Surely the vilest of animals in Allah's sight are those who disbelieve, then they would not believe. (8:55)

Verse 7:176 compares unbelievers to "panting dogs" with regard to their idiocy and worthlessness.

Verse 9:28 says the unbelievers are unclean.

Verse 4:76 says they are helpers of the devil.

Verses 46:29-35 even say that unbelieving men are worse than the demons who believe in Muhammad.

According to Islamic law, non-Muslims may be owned as property by Muslims, but - in keeping with Islam's supremacist message - a fellow Muslim should never be (unless they convert to Islam after they are enslaved).

Christians and Jews are not considered fully human in Islam. The penalty for killing one of them is limited to one-third of the compensation due for unintentionally killing a Muslim. Muhammad made it clear that a believer cannot be put to death for killing a non-believer, since they are not equal (see Conclusion). Thus, killing kafir is less serious than engaging in a consenting sexual relationship outside of marriage.