Easter Is Coming, What Are You Doing About It?

That's true, Christmas isn't in the Bible yet so many celebrate it and don't know or even care of its origins but those that do care ought to know.


I think we all know what Christmas and Easter are, so no need to worry about it.

We will pray with Zarathustra,
We'll pray just like we use ta,
I'm a Zarathustra booster,
And it's good enough for me.

We will pray with those Egyptians,
Build pyramids to put our crypts in,
Cover subways with inscriptions,
And it's good enough for me.

We will pray with those old druids,
They drink fermented fluids,
Waltzing naked though the woo-ids,
And it's good enough for me.

We do dances to bring water,
Prepare animals for slaughter,
Sacrifice our sons and daughters,
And it's good enough for me.

I'll arise at early morning,
When my Lord gives me the warning,
That the solar age is dawning,
And it's good enough for me

Ham for the Cobb salad is a fine idea.
0 Replies
1
Reply Wed 13 Mar, 2019 06:08 pm
“Two thousand years ago Jesus is crucified, three days later he walks out of a cave and they celebrate with chocolate bunnies and marshmallow Peeps and beautifully decorated eggs. I guess these were things Jesus loved as a child.”
― Billy Crystal, Still Foolin' 'Em: Where I've Been, Where I'm Going, and Where the Hell Are My Keys
1 Reply
1
Reply Wed 13 Mar, 2019 07:23 pm
@edgarblythe,
The explanation for Easter starts at around 2:05
From "Me Talk Pretty One Day" and Davids experience in an adult French class in Paris.

0 Replies
1
Reply Thu 14 Mar, 2019 01:34 am
It's the name of the moon goddess Eostre. The story that I heard was that she instructed her servant the hare to tell the people not to be afraid when the moon disappeared because the goddess hadn't gone away she was just doing private stuff. The hare, who sounds like a template for Bugs Bunny, did the opposite, told everyone it was the end of the World, doom, doom etc.

When the goddess returned to quell the riots she appeared as a beautiful bird that laid an egg for the children, and she punished the hare by cutting off his long beautiful tail. 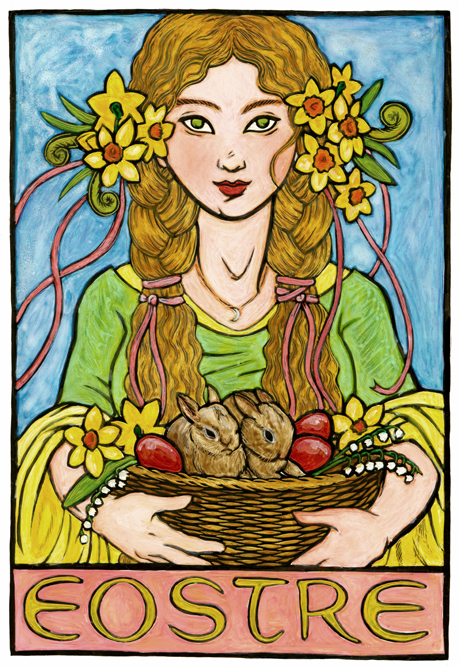 Don't you have google?

How can we be sure that all religions are wrong? - Discussion by reasoning logic
What if no religions are correct, but there still is a God? - Question by neologist
We are all like little children who often say: "Mom, Dad, leave me alone, I want to be on my own". - Question by Leaffan
Beyond tribalism; How well does your religious label serve you? - Discussion by MattDavis
Is religion responsible for the opposition to peace in the Israel-Palestine conflict? - Question by maxdancona
Concern for Religious Freedom or Preaching Political Messages? - Discussion by wandeljw
Why believe in god? The theist perspective. - Discussion by msolga
Why People Seek Solace In Gods. - Question by mark noble
Catholic remarried couples should abstain from sex - Question by Tes yeux noirs
How can a good God allow suffering - Question by SawyerMentink
Religion and Fear - Discussion by TomTomBinks
Copyright © 2022 MadLab, LLC :: Terms of Service :: Privacy Policy :: Page generated in 0.05 seconds on 05/26/2022 at 08:40:20
▲ ▼