Has the Schiavo case Become a Political Football?

My point is the mainstream of the Dem party used to be sensible and only their fringies were nuts.

In the past eight years, their hatred for Bush or anger at losing had changed their party. Now, their MAINSTREAM is nuts and their sensible members are a distinct minority.
0 Replies
1
Reply Sat 25 Jun, 2005 08:39 am
Lash wrote:

I'll work on that one. Meanwhile, can you produce the names of three Republican politicians who you admire?

I'll chalk that logic up to "fair and balanced"

I can easily think of three Republican politicians whom I think are not just sane, but even highly intelligent, though - even when I disagree with them, at times virulently.

There's the obvious pick of course, John McCain - not that I actually agree with much of his viewpoints (thats a mistake all too easily made), but I admire (yes ;-)) his instinct for decency, a quality much rarer in politics than intelligence; and he certainly seems intelligent too.

(That was the point of my post, of course, as you'll already have guessed. When people perceive those in clear opposition to one's own Party as not just wrong, but crazy or insane, then that clearly says more about them than about said opponents; that's myopia. Furthermore, I don't need to remind anyone which Party's faiithful last was into declaring people who radically opposed it insane.)

A third Republican I think is of brilliant intelligence is Karl Rove. He is a lucid strategist, not just clever and smart but able to process a great many scenarios and possibilities and filter out effective mechanisms to turn them around in his party's favour. I think it's his scruples that are completely missing, but not intelligence.

There's minor Republicans too that I think have not just come to beliefs so clearly opposite to mine in full sanity, but even in reflections of personal principles of decency; such varying figures as Alabama governor Bob Riley and the all-too sympathetic (perhaps too sympathetic for politics) Rhode Island Senator Lincoln Chafee.
0 Replies
1
Reply Sat 25 Jun, 2005 08:48 am
Lash wrote:

But, nimh. You can't possibly take my statement literally.

I wasn't taking the rhetorical overkill in this post all too literally ("blob of psychosis" and all), although it's fairly staple fare in your writings and I do get the impression that you actually believe the people you mention are actually crazy rather than just highly disagreeable. Which I find disturbing.

But the occasion for my question was your other post, in which you compare Al Gore with Randall Terry. That's what struck me as myopic. Thats like comparing, I dunno - lemme make an effort to find a Republican whom I dislike as much as I gather you dislike Gore - OK, Newt Gringrich; with that professor claiming to be Indian going on about how the WTC victims weren't innocent. Ward Churchill. (Cause thats what I'd call the nutty fringe). I do think that says more about you (and those who'd join you in such assertions) than about Gore.
0 Replies
1
Reply Sat 25 Jun, 2005 08:49 am
Lash,

Ashcroft - mainstream because he was a Senator and appointed to be AG
nutty - he hid the statue of Justice at the Justice dept behind drapes because she was classical with breasts.
More proof he was nutty. The drapes have been removed now that he is no longer AG.

Frist - mainstream because he is Senate majority leader for GOP
nutty - claimed he could make a medical diagnosis from a video tape.
more proof - he denied that he ever made that claim even though it has been recorded for all posterity by CSpan

Delay - House majority whip
nutty - changed the house rules to protect himself from ethics allegations and eliminated GOP members from ethics committee that voted against him
more proof - claims it is a democratic plot to get him even after unanimous votes by an evenly split ethics GOP/DEM committee finding him guilty of 3 ethics violations.

3 sane GOP
Hagel, McCain, Voinovich
0 Replies
1
Reply Sat 25 Jun, 2005 08:56 am
Parados, your description of Delay suggests a ruthless operator who knows where his bread is buttered rather than a crazed person.

The first bit is easily enough recognizable as pure unscrupulous ruthlessness; the second bit merely reflects that he knows there's a constituency out there who'll believe him, and will thus help him out against said "plot".

The Frist one sounds like y'r typical, much less agile but also more run-of-the-mill political scoundrelry ("me? say that? I never ..." - repeat until storm dies over).

With Ashcroft, you might have a point tho ;-)
0 Replies
1
Reply Sat 25 Jun, 2005 12:41 pm
I agree with the Ashcroft diagnosis. Having to cover up the weebeloes of statues is crazy.

Nay on Frist-- and DeLay is just a little (moderately)misbehaved--not crazy. Of course,Pelosi and quite a few other Dems have done a bad or worse than Tom.

I'm sure you realize I know the difference in distasteful and nuts. I can respect people I disagree with.
0 Replies
1
Reply Sat 25 Jun, 2005 12:51 pm
Okay covering up statues is a little nutty, but in defense of Ashcroft, it was this photo that prompted the ocverup. You'll have to admit the lady is a little distracting. 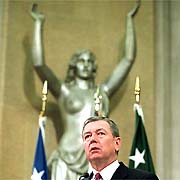 You'll have to admit the lady is a little distracting.


Yes, the spirit of justice has to be hidden in the Department of Justice.

In the past, snagging a photo of the attorney general in front of the statues has been something of a sport for photographers.

When former Attorney General Edwin Meese released a report on pornography in the 1980s, photographers dived to the floor to capture the image of him raising the report in the air, with the partially nude female statue behind him.

0 Replies
1
Reply Sat 25 Jun, 2005 01:14 pm
And why didn't someone take some lessons in art history/symbolism until that time?
0 Replies
1
Reply Sat 25 Jun, 2005 01:18 pm
Because you can't provide lessons in art history everytime you print an article in the paper re what the attorney general says. Personally, I don't blame any national figures from avoiding giving a hostile press more opportunities to make them look ridiculous and thus dilute anything important they might be saying.

Do I believe the press would do that? I absolutely do.

And it says I edited three times up there but in fact I only edited once to add the photo. How does that happen?

Governor Bush's continued pursuit of Mr. Schiavo is not just pointless, it's cruel and unconscionable.

I pressed Mr. McCabe, the state attorney. If there's no evidence that a crime has been committed, I asked, then what is the purpose of the inquiry?

"My purpose," he said, "is simply to respond to the governor. The governor's asked me to do something, and I'm going to try to do it."

I'm officially taking back every positive thing I've ever thought, said or posted about Jeb Bush.

Not only do we understand justice, we know the size of her ta-ta's (36-C).
0 Replies
1
Reply Sat 25 Jun, 2005 04:48 pm
Lash,
You were the one claiming mainstream dems were nutty. I posted those three to give you a starting point to compare to. No mainstream dem that is nuttier?
0 Replies