Anglo-Saxon settlement and Roman army camp found in A14

Forums: Uk, Archaeology
Email this Topic • Print this Page
Reply Thu 29 Mar, 2018 12:01 pm
Have you seen that archaeologists uncover abandoned villages, prehistoric tools and seven tonnes of pottery in Cambridgeshire?
"One of the largest archaeology projects in the UK has revealed Anglo-Saxon settlements, a Roman military camp, remnants of a Medieval village, and a wealth of archaeological treasures. That’s quite a lot for what first appeared as flat Cambridgeshire countryside!" your ignorance about 'the A14'

I'm not so sure. Since various message board software packages limit long titles of threads, I think it is entirely possible that the OP simply shortened the last part of the title from "Anglo-Saxon settlement and Roman army camp found in planned A14 extension" to "in A14", in order to be sure the title would fit in. And this is a reconstruction of the helmet as it undoubtedly appeared at the time of the burial: 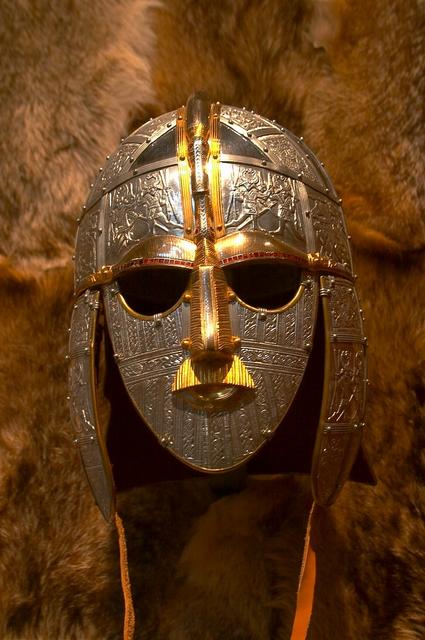 Here is a more detailed description of Sutton Hoo and the archaeological finds:

https://artsandculture.google.com/exhibit/sutton-hoo-anglo-saxon-ship-burial/gQOPNM9M
0 Replies
1
Reply Fri 30 Mar, 2018 02:00 am
@Setanta,
Actually, an Anglo-Saxon settlement and a Roman army camp were found in the A14 bypass dig. The excavation of around 350 hectares has been one of the largest archaeology projects in the UK.
Finds include prehistoric flint tools, seven tonnes of pottery, and more than 7,000 small personal objects including a Roman jet pendant carved with the head of Medusa, a brooch in the shape of a chicken [the OP's picture above], a beautifully carved Anglo-Saxon bone flute – and a startlingly well preserved timber ladder, radio carbon dated to about 500 BC, found with a wooden paddle in a pit several metres deep.

“There is not one key site but a whole expanse – the excavation has given us the whole of the English landscape over the past 6,000 years,” said Steve Sherlock, head archaeologist for Highways England. “The Anglo-Saxon village sites alone are all absolute bobby dazzlers. The larger monuments such as the henges and barrows show up in crop marks and geophysics, but you can only really see things like the post marks of timber buildings by getting down into the ground and digging.”

Press release: A14 Cambridge to Huntingdon: archaeology shines light on 6,000 years of history

1 Reply
1
Reply Fri 30 Mar, 2018 02:08 am
@Walter Hinteler,
Between 2003 and 2006, they digged up in Dortmund (next to house of friends) a huge Roman burial site, used later by Germanic tribes during the migration of peoples as well. During the Merovingian period, people 'moved' their settlement some dozen meters aside, creating a new village there, nowadays below some dozens of new houses.
0 Replies
1
Reply Fri 30 Mar, 2018 02:19 am
Claudius invaded the island in 43 CE. The original occupation was in the southeast and the east. The first Roman fortress was at Camulodunum, now Colchester. Tacitus' Agricola recounts his father-in-law's conquest of much of the island in the period 77/78 and 83/84 CE. The legions were withdrawn in the late fourth century, roughly 383 to 388 CE, during the rebellion of Magnus Maximus. Hengist and Horsa (who, by the names used, were either legendary, or were known by cognomens) did not set up in Kent until 449 CE. This correlates well with the De Excidio of Gildas. Certainly, especially in Suffolk, one can find archaeological sites with British, Roman, and subsequent occupations by the Angles, Saxons and Jutes. But they weren't there at the same time. Hengist and Horsa (roughly, Stallion and Horse) are Saxon words, yet those two are identified as the Jutes who founded a kingdom (and a paltry one at that) in what is now Kent. I find the entire Hengist and Horsa story rather implausible, and with those names, they certainly weren't Jutes.

Whatever the case, this is fascinating stuff. The crapola from the links in the OP is about as plausible as a con man's story, and about as probable as Piltdown man. I just wonder how long it will take to link all that horsie poop up to "ancient astronauts."
1 Reply
1
Reply Fri 30 Mar, 2018 02:44 am
@Setanta,
Setanta wrote:

- A Roman trade distribution centre,
- The remains of 12 medieval buildings abandoned in the 12th century covering an area of 6 hectares, with the remains of up to 40 earlier Anglo Saxon timber buildings and alleys between houses, workshops and agricultural buildings,
- A massive Anglo-Saxon tribal territorial boundary with huge ditches,
- Three prehistoric henge monuments,

--- that's at least something nearly unique ... on the British Isles.
1 Reply
2
Reply Fri 30 Mar, 2018 03:47 am
@Walter Hinteler,
Abandoned in the 12th century. That in itself is intriguing. The first King Henry had lost his son and heir, so upon his death, Stephen of Blois, his sister's son, claimed the throne. Of course, the baronage accepted him--provisionally. Providing he didn't screw up. Henry died in 1135. He did leave quite a few children, and one of the few legitimate ones--Matilda of Normandy--was the dowager Holy Roman Empress. So she was known as Maud the Empress. Long before Henry's death, doubts about the succession lead to a period known as the Anarchy. This was exacerbated when Maud, unhappily married to the Count of Anjou, decided to contest the crown with Stephen, leading to a civil war from 1140 onward. As Stephen's very unpopular son and heir was killed while raiding church lands in 1153, and the Archbishop of Canterbury and most English Bishops would not support him, Stephen eventually accepted Maud's son, Henry Plantagenet, by then married to Eleanor of Aquitaine. (That set up all manner of grief which did not finally end until the dereat of the English in the Hundred Years War in 1453.

Henry was really the first Norman king, not excepting the first King William, to actually impose his will on the baronage. The Anarchy was truly a time of strife and uncertainty, and knights and barons were often able to run rampant over their neighborhoods. I'm sure a great many villages were abandoned in that time.
0 Replies