Forums: Mythology
Email this Topic • Print this Page
Reply Fri 17 Feb, 2017 10:53 am
So, I found this interesting sculpture on one of the buildings in my home town. I was wondering what the creature could be. I looked into the history of the building to find that it was built by a rich merchant who had travelled the world so this could be anything.

More info:
-Built in XVIII Century (Germany)
-Human head, fish/scaly body and tail (curved tail), and paws of a dog or lion, and two small wings.
-Here it is:
(It was renovated recently so it does not look very old)
http://imgur.com/so4XYS7

And the direct link: http://i1382.photobucket.com/albums/ah279/LeviStubbs/German%20man%20fish%20sculture_zpssbeifwyt.jpg

My best guess is to get in touch with the historical society of the building locality and see what they come up with. If they are not listed, just call up the town hall of the town or city in which the building is located and ask for the phone number, address or Email.

Finally, I think there has to be some society devoted to the study of German or European stone carvings, see if you can make connections there. Good luck.

So, I found this interesting sculpture on one of the buildings in my home town.

What type of building is it on? Church? Library? Town Offices? Might help to figure out why they chose a particular creature.

1 Reply
2
Reply Fri 17 Feb, 2017 03:25 pm
@rosborne979,
Its a family home built by a rich merchant who had travelled the world so this could be anything.
0 Replies
0
Reply Fri 17 Feb, 2017 03:30 pm
@McGentrix,
Can you please be more specific, I need this for a chronicle
0 Replies
2
Reply Fri 17 Feb, 2017 03:33 pm
@Blickers,
Thank you so much. The issue with asking a local council / town hall is that A. since 1945 the area is under Polish control while the hosue was built much earlier.
B. I am researching this with my father who is the local historian and knows more about the town than anyone else. You know it's a hard one when the Historian doesn't know.

We looked through an old chronicle to find it being described as a Sphinx - however, we both agreed it did not look like a sphinx. After further searches we were more confused than before so i came here.
1 Reply
2
Reply Fri 17 Feb, 2017 03:38 pm
@HansSchteppke39,
Well, now you have a lot of us interested, even myself.
0 Replies
3
Reply Fri 17 Feb, 2017 03:51 pm
@Blickers,
Looks to me like a human-headed dragon.

It's Geryon from Dante's Inferno. There was a previous man-animal named Geryon in Homer, but Dante's Geryon is quite different. 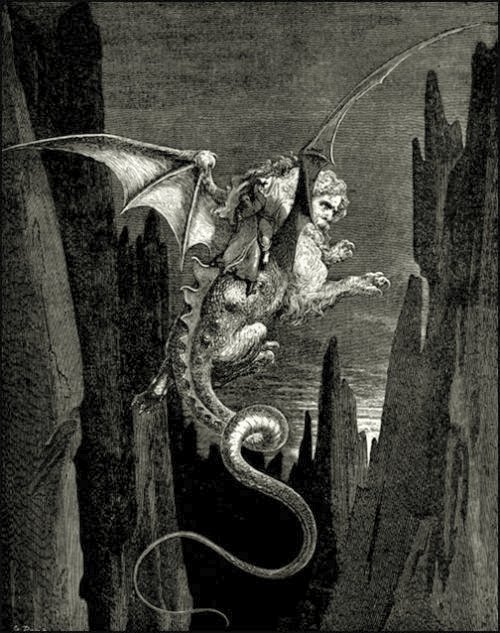 The Geryon of Dante's 14th century epic poem Inferno bears no resemblance to any previous writings. Here, Geryon has become the Monster of Fraud, a beast with enormous dragon-like wings with, the paws of a lion, the body of a wyvern, and a scorpion's poisonous sting at the tip of his tail, but with the face of an "honest man". He dwells somewhere in the shadowed depths below the cliff between the seventh and eighth circles of Hell (the circles of violence and simple fraud, respectively); Geryon rises from the pit at Virgil's call and to Dante's horror Virgil requests a ride on the creature's back. They then board him, and Geryon slowly glides in descending circles around the waterfall of the river Phlegethon down to the great depths to the Circle of Fraud.

Lorelei is a germanic river spirit/ goddess from the river Rhine in germany. The name "Lorelei" refers also to the rock at which is her court. She is a powerful river spirit that has worldwide worshippers. Lorelei and many of her court are similar to nymphs, but are actually an unusual form of elf. She presides at her court on Lorelei and is the queen of a Seelie court of the Rhine. She is powerful and benevolent and controls the powers of the river. She is known by some locals as "the maiden of the Rhine", and many know her as a fairy queen or mermaid.

Dagon, Dagan - the most ancient gods of the Middle East and Mesopotamia
Dagon was West Semitic deity and he was honoured as a god - protector of farming (agriculture) and fisheries. According to the most widespread point of view, Dagon is Hebrew or Canaanitish (I millenary BC) form of the name of Dagan mentioned in Akkadian (Assirian-Babylonian) texts (III-I millenaries BC) and in the texts of Mari, Ebla and Ugarit, and also in personal names of Akkadian tsars (Iddin-Dagan, Ishme-Dagan, Sargon of Akkadian). Eh, close but no cigar.
0 Replies
1
Reply Fri 24 Feb, 2017 06:14 pm
@HansSchteppke39,
It might be a Siren.
Sirens were considered sometimes as half-bird half-human, sometimes half-fish half-human, so this could be a mix of both. I wouldn't care much about the "paws" as this particular sculpture is not very sophisticated, thus these can be hands as well

Or Melusine - the folklore water spirit.

Or Typhon (much simplified version).
0 Replies

Legends of cities settled by fishpeople? - Question by Muarck
The Origin of Easter Customs - Question by anthony1312002
Let's get this straight, the story of Moses is a myth. - Discussion by maxdancona
Yoruba's number meaning - Question by SUZI12354
I need help to find a book about Greek Myth - Question by gnamira
Who created the first generation of human in Greek mythology? - Question by Lisa Ge
Does supernatural control exonerate Eve of any sin? - Question by Greatest I am
The Star of Bethlehem - Question by Smileyrius
mosaic art identification - Question by lord15993
Circling a fate on the calendar; histories predictions - Discussion by BumbleBeeBoogie
Copyright © 2022 MadLab, LLC :: Terms of Service :: Privacy Policy :: Page generated in 0.03 seconds on 07/01/2022 at 05:26:40
▲ ▼