The Biggest Mistake You're Making in the Bathroom

The genital area is rife with microbes, and I don't know of anyone who can pee without handling his penis.


I believe that one has developed an immunity to one's own penile germs, similar to people that kiss their dog, but never get sick; they developed an immunity to their dog's germs, I believe. Therefore, like our not getting sick from all the bacteria in one's own mouth, one can touch one's own scrotum and not get sick. All this might mean is that one shouldn't shake hands with another that just came out of the men's room.
4 Replies
1
Reply Tue 26 Apr, 2016 07:21 pm
Will tomorrow's topic be Golden Showers?
1 Reply
1
Reply Tue 26 Apr, 2016 07:33 pm
@Robert Gentel,
Robert Gentel wrote:

What about when they only have blow dryers?


The people who were in charge of doing that should have their hands cut off.

When there's both, I always take the minimal amount of paper needed. When there's not, I use the stupid hand dryer. I'll try to open the door using my non dominant hand. Best case scenerio is when someone else is coming in or leaving at the same time, and you can ride their slip stream.


I Really can't stand those Dyson Airblade Driers. You almost can't help touching the sides of them. They have models that you don't have to stick your hands into it. They're not so bad. Apparantly they also make one that's right at the faucet.

There must be some type of device so one can open a bathroom door using a foot lever.

Again, is this rocket science? 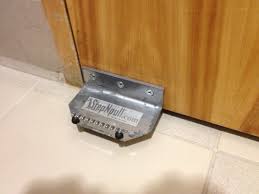 Again, is this rocket science?

It is not rocket science. It is obsessive compulsive disorder.

I bet the stress caused by obsessing over germs causes more damage to the health of Americans than the germs themselves.

I don't know of anyone who can pee without handling his penis.

You should meet my grandson. It's a disaster after he goes.
When questioned about why he doesn't use his hand to aim, he replied 'Because then I'd have to wash my hand!".
0 Replies
1
Reply Tue 26 Apr, 2016 08:20 pm
Let's just look at the facts here. According to the Telegraph, 62% of men and 40% of women don't wash their hands after they pee.

Germs are all around you. The world goes on anyway. People live long, fulfilling lives without being constantly obsessed about avoiding human contact or doing door-opening tricks with feet or wrists.

You have every right to your own obsession. People will sell you products to feed your phobias. Some of them are harmless except for the cost ... others (like antibacterial soaps) actually make you. How far you go with your own obsessive behavior is your own business (although I reserve the right to find it amusing).

But the truth is that the majority of us don't give a crap. There isn't much you can do about that. Sorry.

What about when they only have blow dryers?


The people who were in charge of doing that should have their hands cut off. 0 Replies
1
Reply Wed 27 Apr, 2016 07:20 am
@Tes yeux noirs,
I always wondered that myself and I am an American. It ain't like we are bathing. We also use the term Restrooms - what are we just resting there or something. It is kinda like my New Yorker friend that explained to me (when talking about New York roadways) isn't it obvious - you drive in the parkway and you park in the drive way.

I remember once seeing a candid camera or similar type show where they hid a camera and filmed people with odd things to see their reactions - in one they had a typical sign in a public area that said Restrooms with an arrow - these people upon entering the restroom were surprised to see instead of the toilets and sinks - people lounging around on couches and comfty chairs just resting.
0 Replies
0
Reply Wed 27 Apr, 2016 07:38 am
@maxdancona,
maxdancona wrote:

But the truth is that the majority of us don't give a crap.


Until that very sad day, your young healthy child, admitted to a hospital for a routine procedure, dies from SEPSIS. How did this young child ever develope SEPSIS in an American hospital ( supposedly, the safest and the best of the best)?

Tracking the care delivered to your child in the hospital ( procedures and staff),the evidence demonstrates that the IV, administered to your child had been contaminated with a "small" amount of fecal material, which was then traced to the fingers of the pharmacist ( tech, or nurse)) who prepared the IV and during the prep work touched his/her fecal-infested finger to the IV port, which then resulted in the infection and eventual SEPSIS and death of your child.

You may not care if your child dies by these unforgivable means, but I care about the well being of mine.
1 Reply
1
Reply Wed 27 Apr, 2016 07:41 am
@maxdancona,
A friend once told me about a study she had read. It was about testing those mints that are sometimes provided in a container on something like a host table when you leave a restaurant.

There are some that are not individually wrapped, but where you use a spoon or other item to scoop some out. Well they tested these in many places and they all had tested for trace amounts of urine. So I am assuming it is ok unless you prefer not to consume trace amounts of other people's urine
0 Replies

Doubt with the Scansion - Question by Julssss
Are argyle socks warmer than striped or solids? - Discussion by Sturgis
How weird is a hand fetish? - Question by Calexh
What is wrong with my hands? Please help. - Question by jennniferlea
Small head, hands and feet? - Question by Ditzy722
How to combat the dropsies? - Question by theresaerwinn
Copyright © 2021 MadLab, LLC :: Terms of Service :: Privacy Policy :: Page generated in 0.03 seconds on 08/03/2021 at 11:59:19
▲ ▼