British Home Secretary Amber Rudd on Thursday announced the launch of a study of the "costs and benefits" of EU immigration, to be completed by September 2018 - just over six months before Britain is set to leave the bloc.

Rudd said she had asked the government's Migration Advisory Committee (MAC) to give the government "the most accurate picture possible of the extent to which the UK economy uses EU labor."

The study will consider the regional distribution of EU migration, including which industries are most reliant on it. It will also look at the role of temporary and seasonal workers in British economy.

"We will ensure we continue to attract those who benefit us economically, socially and culturally," Rudd wrote in Britain's Financial Times newspaper. "At the same time, our new immigration system will continue to give us control of the volume of people coming here," she said.
[...]

1 Reply
3
Reply Thu 27 Jul, 2017 09:22 am
@Walter Hinteler,
Racehorses and horse races face hurdle as Brexit threatens free movement:
Irish racehorse trainers and breeders fear a Brexit that impedes the free movement of animals could threaten its success on the track and position as Europe's largest producer of thoroughbreds.

Brexit: All bets are off for Irish horse racing industry

0 Replies
1
Reply Thu 27 Jul, 2017 12:15 pm
I was very grateful for Saab's openness and her personal stories regarding the subject.

I appreciated her willingness to share her perspective--especially on this issue, which was close to her heart and quite contentious.

This subject and every one she attended was improved by her participation.
0 Replies
2
Reply Fri 28 Jul, 2017 04:46 am
Maltese PM: I'm starting to believe Brexit will not happen

Joseph Muscat, who has inside view of Brexit talks as his country holds EU presidency, sees signs that ‘tide is turning’

Brexit may not happen and a political leader in Britain should show courage and fight for a referendum on the terms of the country’s exit deal with the EU, the prime minister of Malta has said.

Joseph Muscat, who has been on the inside track of the Brexit talks in recent months while Malta has held the rotating presidency of the European council, has spoken of his growing belief that the UK will remain an EU member.

“The will of the people can have disastrous consequences, history teaches us,” Muscat said in an interview with the Dutch newspaper De Volkskrant. “I could name some examples, but they’re so horrendous they’d raise the wrath of my British friends.

“For the first time, I’m starting to believe that Brexit will not happen. I am seeing hopeful signs that indicate things will change. I see encouraging signs that the tide is turning. I’m not saying the Brits have made a mistake, but the mood is changing.”

Muscat, who is leader of the Maltese Labour party, added: “People see that their fundamentally valid vote has been given an answer that does not offer a solution.

“The referendum was democratic, but has resulted in a situation in which everyone loses. Doubt is creeping in. It would be good if a political leader in the UK stands up and is courageous enough to address this new situation. Someone who says: let’s put the Brexit end-deal to a popular vote.”
[...]

Former Irish PM Bertie Ahern about rumours that Ireland could leave the EU as well (according to a report in The Independent).
1 Reply
1
Reply Fri 28 Jul, 2017 08:39 am
@Walter Hinteler,
Hammond says UK will seek Brexit transitional deal of up to three years

Britain’s relationship with the EU may look similar to its current one for up to three years after Brexit, with free movement, access to the single market and an inability to strike trade deals with other countries, Philip Hammond has said.

The chancellor confirmed multiple reports over the past week that the cabinet had agreed to seek a transitional period of about three years, ending before the next election, which is due in 2022.
[...]
Some Brexit supporters may be unhappy with the prospect of the UK being unable to strike trade deals with third parties for three years after leaving the EU but Hammond insisted the cabinet was united.
[...]
Hammond confirmed free movement would probably end in name only until 2022.
[...]
Hammond suggested there could be a tribunal system, rather than the European court of justice, to settle any disputes during the transitional period, similar to the arrangements in place in European Economic Area countries such as Norway. [[*]]

However, the lack of oversight from the ECJ could prove a sticking point with other EU member states. Some in Brussels are also unenthusiastic about the idea of a transition period that gives the UK too many benefits without actual membership of the EU. The EU signalled on Friday that a transition period could only be agreed after the separation terms.
[...]

* That's the so-called EFTA-Court ("Court of Justice of the European Free Trade Association States"). The EFTA Court was set up to perform the enforcement of EU-laws instead of the ECJ ... (> Agreement between the EFTA States on the Establishment of a Surveillance Authority and a Court of Justice
1 Reply
2
Reply Fri 28 Jul, 2017 05:27 pm
@Walter Hinteler,
Quote Walter's link:

Brexit may not happen and a political leader in Britain should show courage and fight for a referendum on the terms of the country’s exit deal with the EU, the prime minister of Malta has said.

That's what I've thought for awhile. If neither side really wants this thing, I don't Article 50 is an immovable object. And it is beginning to look like neither side wants it. Plus it favors Putin's goal of fracturing Western alliances-divide and conquer.
0 Replies
0
Reply Sat 29 Jul, 2017 08:08 am
Not sure how a country--or an island 🌴--can ban teenagers from a certain country on the expectation of bad manners...

Not sure how a country--or an island 🌴--can ban teenagers from a certain country on the expectation of bad manners...

It's neither a country nor an island that bann teenage boozers but 95 per cent of this Greek town’s hotels (on Crete) have signed up to a plan to ban these people.
Authorities in the Balearic Islands have asked Spain and the European Union to ban alcohol on flights and in airports as they battle "anti-social tourism".

I sincerely doubt that boozing during the holidays at certain ressorts is Brexit related.
1 Reply
1
Reply Sat 29 Jul, 2017 08:38 am
@Walter Hinteler,
I wonder what criteria they'll use.
1 Reply
4
Reply Sat 29 Jul, 2017 08:50 am
@Lash,
I don't know Greek. But what I got is that those 189 mainly British youth, who were arrested the last weeks for possessing nitrous oxide (the former 'legal high' in the UK which is usually taken using a balloon) were the straw that broke the camel's back.
1 Reply
2
Reply Sat 29 Jul, 2017 09:19 am
@Walter Hinteler,
There are several research papers online about drinking habits/extensive behaviour of British youth abroad.
Already in 2003, British boozers were banned by Greek officials in Faliraki, Rhodes.

I could add stories from the 70's/80's/90's in France, where bars were closed for British (but liquor stores were larger than the actual supermarkets and all adds in English) ...
1 Reply
1
Reply Sat 29 Jul, 2017 09:29 am
@Walter Hinteler,
Wow. Specifically Brits. This is news to me. Thank you.
1 Reply
1
Reply Sat 29 Jul, 2017 09:36 am
@Lash,
But actually, British boozing is Brexit related: Return of the booze cruise: ferry chiefs plan to slash wine and beer prices after Britain leaves the EU

(There had been an uproar in certain places among certain persons when the EU abandoned the duty free cruises ... Ferry firm to open `booze hypermarkets')
0 Replies
2
Reply Sat 29 Jul, 2017 10:39 am The intervention comes after Chancellor Philip Hammond said there was "broad acceptance" in Cabinet of a post-Brexit transitional period lasting up to three years.
[...] 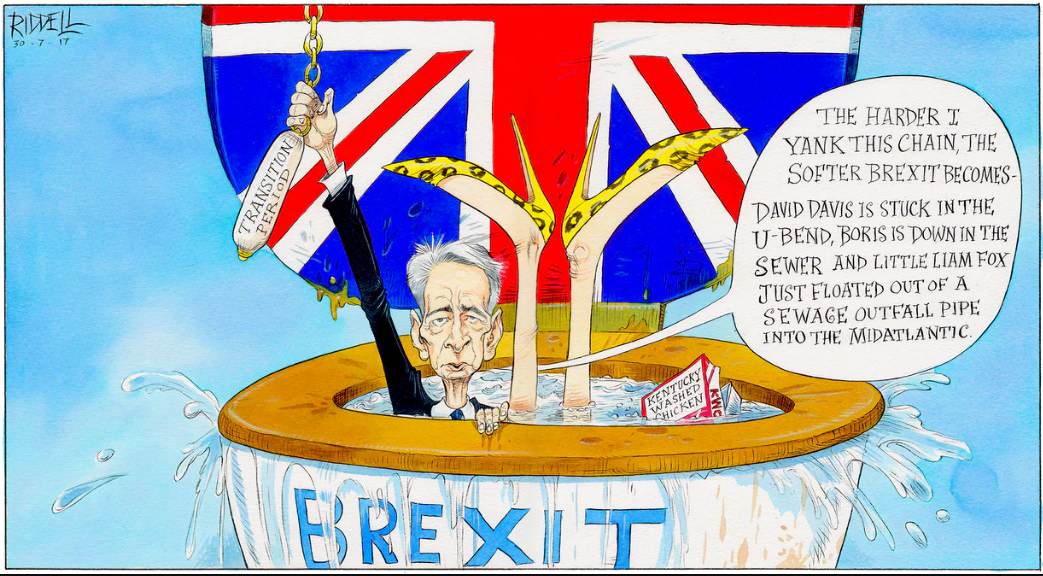 [...]
The alarming assessment, by the Europe-wide Oxera consultancy, sets out what it describes as the most likely impact of the new border checks imposed after Brexit. The warning comes after Michel Barnier, the European Union’s chief Brexit negotiator, ruled that the government’s hopes of securing “frictionless” trade outside the EU was not possible. It also follows a week in which cabinet Brexiters signalled they were ready to adopt a comprehensive transitional deal for up to three years, as ministers attempt to buy time to tackle a series of unresolved policy challenges raised by Brexit.

The complexities of creating a new customs regime as close as possible to the current arrangements is one of the major concerns for the Treasury, as it seeks to avoid serious disruption. Tory MPs are already sounding the alarm over potential gridlock at the border.

The Oxera analysis paper, written by its head of transport Andrew Meaney and seen by the Observer, finds that the most likely outcome would be a scenario it describes as “slow trade: low regulation, high enforcement”.

Downing Street has sought to put an end to Cabinet squabbling over Brexit by making clear that freedom of movement will end in March 2019.

Theresa May's official spokesman confirmed EU rules allowing Europeans to travel freely across UK borders would end on the day of Brexit, despite confusing signals coming from other Cabinet ministers.

He indicated further details of exactly how the UK will manage immigration would be published in due course, but said it would be "wrong to suggest" freedom of movement would continue unchanged.

1 Reply
1
Reply Mon 31 Jul, 2017 06:53 am
@Walter Hinteler,
Since the above post was just copying a "Breaking News", a bit more now from The Guardian:
No 10 rejects 'off-the-shelf' transitional deal for Brexit:

[...]
While the prime minister is on holiday, the chancellor has made a series of interventions, including claiming that the UK’s relationship could look “similar in many ways” for some time after formally leaving the bloc in March 2019.

Separately, Hammond also denied that he wanted to turn the UK into a deregulated, low-tax economy, telling France’s Le Monde: “I often hear it said that Britain is considering participating in unfair competition in regulation and tax.

“That is neither our plan nor our vision for the future. The amount of tax we raise as a percentage of our GDP puts us right in the middle of the pack.” He argued that after Brexit, the country would keep a “social, economic and cultural model that is recognisably European”.

Number 10 said the prime minister still believed that “no deal is better than a bad deal,” adding that it was “obviously not in Britain’s interests to sign up to a deal which would punish the UK”.

The spokesman said: “What we are fully committed to doing is securing a good deal for Britain and for the European Union and we are making good progress towards it.”

Hunt said the cabinet was “absolutely united” behind a gradual, business-friendly Brexit. The aim was “to avoid a cliff edge as we move to a new immigration policy,” Hunt said, arguing this would need a gradual implementation process.

Fox has insisted there is no cabinet-wide agreement on migration not being controlled after March 2019.