Forums: Aliens, Alien Interest, Edgar Mitchell, Astro-Nut
Email this Topic • Print this Page
Reply Thu 13 Aug, 2015 10:42 am
Edgar Mitchell was the sixth man to walk on the moon and long claimed to have evidence of extra terrestrial visitors.


Aliens flew to earth on peace missions to prevent nuclear war between America and the Soviet Union at the start of the Cold War, according to a former Nasa astronaut.

Dr Edgar Mitchell has made a series of increasingly bizarre claims about extra terrestrial life.

None has ever been corroborated with independent evidence.

But his status as the sixth man to walk on the moon - during the Apollo 14 mission in 1971 - gives his claims a ready audience.

Now he says military top brass saw UFOs visiting Earth during weapons tests in the 1940s at American missile bases and the famous White Sands Proving Ground, in the New Mexico desert, where the world's first nuclear bomb was detonated in 1945.

"White Sands was a testing ground for atomic weapons - and that's what the extra-terrestrials were interested in," the 84-year-old Texan told Mirror Online.

"They wanted to know about our military capabilities.

"My own experience talking to people has made it clear the ETs had been attempting to keep us from going to war and help create peace on Earth."

• Edgar Mitchell: what I learnt from going to the moon

He claims other officers manning missile silos or Pacific bases back up his claims with stories of alien spacecraft shooting down test rockets mid-flight.

I wonder - seems there are a few crazy astronauts - how about the diaper woman astronaut?
1 Reply
1
Reply Thu 13 Aug, 2015 07:55 pm
@Linkat,
A few too many cosmic rays to the grey matter on that last trip maybe.
0 Replies
1
Reply Fri 14 Aug, 2015 02:56 am
@Linkat,
cmon, these guys are on fixed incomes. They need something to generate revenue and keep them relevant.

I wonder how anyone would think that even a tiny black hole could rest on the bottom of the sea floor instead of sinking to the center of the earth.
2 Replies
1
Reply Fri 14 Aug, 2015 09:40 pm
@BillRM,
Quote:

I wonder how anyone would think that even a tiny black hole could rest on the bottom of the sea floor instead of sinking to the center of the earth.

My bs meter is pegged to the right.

Or the hundreds of atmospheric nuclear tests?

Oh? and we was the only nation who test bombs in the atmosphere including the biggest bomb ever used a 50 meg tons soviet test.

Not to mention the French who even blow up a green peace ship that was interfering with their Pacific Islands tests.
0 Replies
1
Reply Thu 3 Sep, 2015 08:12 am
More proof that Edgar wasn't off his rocker... 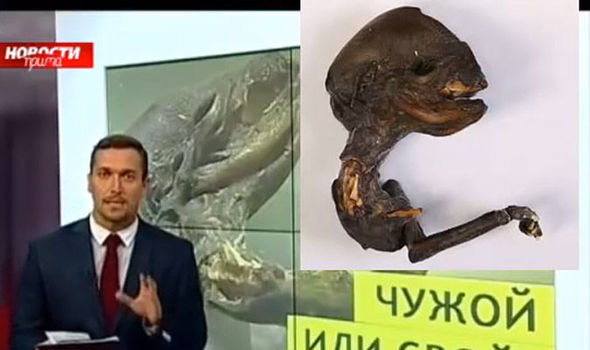 Local news reports said the corpse with a "mysterious skull" was found by two residents next to the River Kovashi, on Sunday, in the Russian town of Sosnovy Bor, a town built in 1958 to serve the Leningrad Nuclear Power Plant.

It is said that the locals, who spotted it by chance, initially believed it could be a mutant chicken embroyo that had been discarded.

However, local experts have been so far unable to say what it is.

One researcher was quoted as saying: "It seems that this body is neither fish nor fowl - this creature has a mysterious skull, no neck and wings."

The body was also looked at by experts from the Institute of Biophysics in Krasnoyarsk, who said it was impossible to make a quick identification