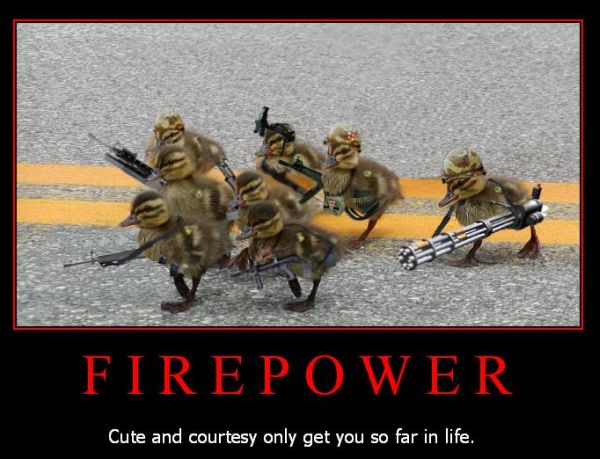 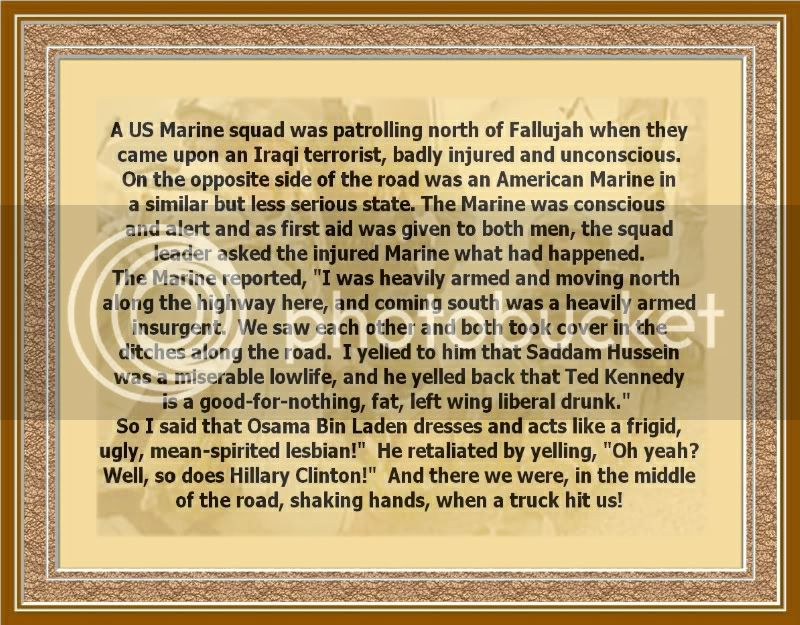 Her Majesty The Queen has presented the Victoria Cross, Britain’s highest order of gallantry, to Lance Corporal Joshua Leakey of the 1st Battalion the Parachute Regiment for heroic action in Helmand Province, Afghanistan.

Only three Victoria Crosses have been awarded for the Afghan campaign and Lance Corporal Joshua Leakey, 27, from Hampshire, is the only living recipient, the others having been awarded posthumously.

Lance Corporal Leakey was the first of today's recipients to receive his award from Her Majesty in the Waterloo Chamber. Music throughout the service was provided by the Countess of Wessex's String Orchestra from the Corps of Army Music. The young soldier from Hampshire was accompanied at the investiture at Windsor Castle by his family.

Lance Corporal Josh Leakey said: "It's such a great honour and massively humbling to be put among all those people who have received the VC in the past. My family are very proud and happy but the lads in the battalion know this isn't something you seek out. You just do what you deem necessary on the day and anyone of them could be standing where I am today."

Between May and December 2013, Lance Corporal Leakey was deployed in Afghanistan as a member of a Task Force conducting risky daylight operations to disrupt insurgent safe-havens and protect the main operating base in Helmand province. During what should have been a routine patrol on the 22nd August 2013 with joint UK/US forces, he single-handedly turned the tide of a vicious Taliban insurgent attack and prevented considerable loss of life by taking the initiative and repeatedly running through heavy fire to man machine guns.

After dismounting from their Chinook helicopters, the force had come under accurate machine gun and rocket propelled grenades’ fire resulting in the Command Group being pinned down on the exposed forward slope of a hill. The team attempted to extract from the killing zone for an hour, their efforts resulting in their officer, a US Marine Corps Captain, being shot and wounded, and their communications being put out of action. Lance Corporal Leakey, positioned on the lee of the hill, realised the seriousness of the situation and with complete disregard for his own safety, dashed across a large area of barren hillside which was now being raked with machine gun fire. As he crested the hill, the full severity of the situation became apparent: approximately twenty enemy had surrounded two friendly machine gun teams and a mortar section rendering their critical fire support ineffective.

Undeterred by the very clear and present danger, Lance Corporal Leakey moved down the forward slope of the hill, and gave first aid to the wounded officer. Despite being the most junior commander in the area, Lance Corporal Leakey took control of the situation and initiated the casualty evacuation. Realising that the initiative was still in the hands of the enemy, he set off back up the hill, still under enemy fire, to get one of the suppressed machine guns into action. On reaching it, and with rounds impacting on the frame of the gun itself, he moved it to another position and began engaging the enemy.

This courageous action spurred those around him back into the fight; nonetheless, the weight of enemy fire continued. For the third time and with full knowledge of the extant dangers, Lance Corporal Leakey exposed himself to enemy fire once more. Weighed down by over 60 lbs of equipment, he ran to the bottom of the hill, picked up the second machine gun and climbed back up the hill again: a round trip of more than 200 metres on steep terrain. Drawing the majority of the enemy fire, with rounds splashing around him, Lance Corporal Leakey overcame his fatigue to re-site the gun and return fire. This proved to be the turning point. Inspired by Lance Corporal Leakey's actions, and with a heavy weight of fire now at their disposal, the force began to fight back with renewed ferocity.

Having regained the initiative, Lance Corporal Leakey handed over the machine gun and led the extraction of the wounded officer to a point from which he could be safely evacuated. During the assault 11 insurgents were killed and 4 wounded, but the weight of enemy fire had effectively pinned down the command team.

Displaying gritty leadership well above that expected of his rank, Lance Corporal Leakey's actions single-handedly regained the initiative and prevented considerable loss of life, allowing a wounded US Marine officer to be evacuated. For this act of valour, Lance Corporal Leakey is highly deserving of significant national recognition.
0 Replies
1
Reply Fri 29 May, 2015 12:10 am

The House Veterans’ Affairs Committee will hear new estimates of the cost of lifetime medical care and benefits for returning troops disabled by their service — a total of more than $1.3 trillion. 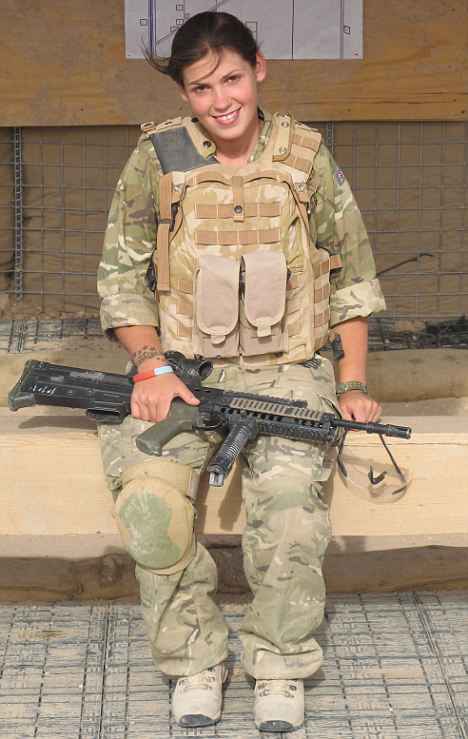 'Oh, Kylie! What did you do? Next time, please don’t...': What mother told Military Cross hero daughter who twice braved hails of bullets to tend war wounded. 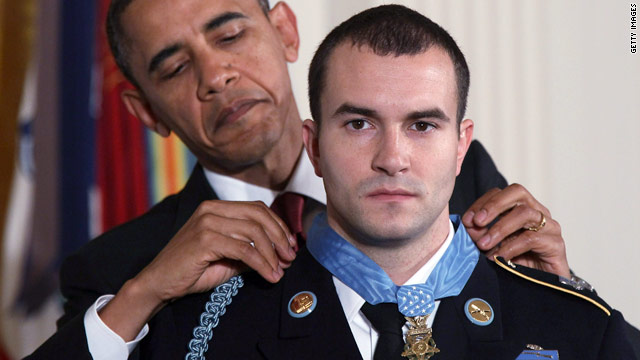 I am well. Hope you are. Tell Brother Walt and Brother Elmer the Marine Corps beats working for old man Minch by a mile. Tell them to join up quick before all of the places are filled.

I was restless at first because you got to stay in bed till nearly 6am but I am getting so I like to sleep late. Tell Walt and Elmer all you do before breakfast is smooth your cot, and shine some things. No hogs to slop, feed to pitch, mash to mix, wood to split, fire to lay. Practically nothing. Men got to shave but it is not so bad, there's warm water.

Breakfast is strong on trimmings like fruit juice, cereal, eggs, bacon, etc., but kind of weak on chops, potatoes, ham, steak, fried eggplant, pie, and other regular food, but tell Walt and Elmer you can always sit by the two city boys that live on coffee. Their food plus yours holds you until noon when you get fed again. It's no wonder these city boys can't walk much.

We go on "route marches," which the platoon sergeant says are long walks to harden us. If he thinks so, it's not my place to tell him different. A "route march" is about as far as to our mailbox at home. Then the city guys get sore feet and we all ride back in trucks.

The country is nice but awful flat. The sergeant is like a school teacher. He nags a lot. The Captain is like the school board. Majors and colonels just ride around and frown. They don't bother you none.

This next will kill Walt and Elmer with laughing. I keep getting medals for shooting. I don't know why. The bulls-eye is near as big as a chipmunk head and don't move, and it ain't shooting at you like the Higgett boys at home. All you got to do is lie there all comfortable and hit it. You don't even load your own cartridges. They come in boxes.

Then we have what they call hand-to-hand combat training. You get to wrestle with them city boys. I have to be real careful though, they break real easy. It ain't like fighting with that ole bull at home. I'm about the best they got in this except for that Tug Jordan from over in Silver Lake . I only beat him once. He joined up the same time as me, but I'm only 5'6" and 130 pounds and he's 6'8" and near 300 pounds dry.

Be sure to tell Walt and Elmer to hurry and join before other fellers get onto this setup and come stampeding in.

Your loving daughter,
Alice
0 Replies
0
Reply Sat 30 May, 2015 05:24 am
A Navy SEAL & Usama Bin Laden walk into a bar.
A Navy SEAL walks out of a bar.
0 Replies
1
Reply Sat 30 May, 2015 05:24 am
Osama made his way to the pearly gates. There, he is greeted by George Washington. "How dare you attack the nation I helped conceive!" yells Mr. Washington, slapping Osama in the face. Patrick Henry comes up from behind: "You wanted to end the Americans' liberty, so they gave you death!" Henry punches Osama on the nose. James Madison comes up next, and says, "This is why I allowed the Federal government to provide for the common defense!" He drops a large weight on Osama's knee. Osama is subject to similar beatings from John Randolph of Roanoke, James Monroe and 65 other 18th-century American revolutionaries. As he writhes on the ground, Thomas Jefferson picks him up to hurl him back toward the gate where he is to be judged.

As Osama awaits his journey to his final very hot destination, he screams, "This is not what I was promised!"

More than a dozen female Japanese broadcasters were dubbed “Tokyo Rose,” but the nickname was most famously linked to an American named Iva Toguri. A native of Los Angeles, Toguri was stranded in Japan after World War II broke out while she was visiting family members. She eventually took a job at Radio Tokyo, where she found herself ushered into a role as an on-air presenter. Using the handle “Orphan Ann,” the smoky-voiced Toguri soon became a legend of the Pacific Theater. By late 1943, thousands of GIs regularly tuned in to “The Zero Hour,” a radio show where she played pop music in between slanted battle reports and put-downs aimed at U.S. troops.

Toguri’s prominence saw her branded as one of the war’s most notorious propagandists, but evidence shows that she was not a Japanese sympathizer. Not only did she refuse to renounce her U.S. citizenship, she often willfully undermined her anti-American radio scripts by reading them in a playful, tongue-in-cheek fashion, even going so far as to warn her listeners to expect a “subtle attack” on their morale. Nevertheless, Toguri’s program became conflated with more vicious propaganda, and she was arrested and convicted of treason after the Japanese surrender. She was released from prison in 1956, but it would take more than 20 years before she finally received an official presidential pardon for her role in the war.
0 Replies
1
Reply Sat 30 May, 2015 11:53 pm

Bad memories and self-medication don't mix! You are the toughest of your generation . You would never think twice about asking a fellow soldier for a hand, so do it now . All nations have organisations run by fellow soldiers to give a hand . Every day is russian roulette until you go to those organisations . 22+ suicides a day in the USA alone .
0 Replies