Forums: Imdb, Imdb Poll, Alien Armies, Battle For Earth, Movies
Email this Topic • Print this Page
2
Reply Mon 18 May, 2015 10:58 am
How about that alien in Cloverfield that threw the head of the Statue of Liberty like a bowling ball through Greenwich Village, mowing down all those posers, making them spill their Appletini's and Venti Iced Skinny Hazelnut Macchiato, Sugar-Free Syrup, Extra Shot, Light Ice, No Whip?

How about that alien in Cloverfield that threw the head of the Statue of Liberty like a bowling ball through Greenwich Village, mowing down all those posers, making them spill their Appletini's and Venti Iced Skinny Hazelnut Macchiato, Sugar-Free Syrup, Extra Shot, Light Ice, No Whip?

A single alien doesn't comprise an army. Would be a good inclusion for a general monster movie poll suggestion.
1 Reply
2
Reply Mon 18 May, 2015 01:18 pm
@tsarstepan,
Oh.

I thought that there were going to be more aliens, and this guy was just the scout or something.

If he was alone, that just proves what a douchebag he was. The other aliens from his planet probably kicked him off because nobody liked him.

They were probably all like "Joel is such a dick. I'm glad he's gone"

Sheer brilliance Maxdancona! They would make for an insane battlefield opponent!


This is what we have on the list right now:
The Mysterons from Captain Scarlet and the Mysterons (1967) as suggested by Izzythepush from a2k!

The Borg from Star Trek: The Next Generation (1987)

Cylons, both Centurians and 'skinjobs' from Battlestar Galactica (2004), etc....

The Daleks from Doctor Who (2005) as suggested by Izzythepush from a2k!

The Weeping Angels from Doctor Who (2005) as suggested by maxdancona from a2k!

The Vogons from The Hitchhiker's Guide to the Galaxy (2005), etc.... as suggested by oralloy from a2k!

Malekith (Christopher Ecclestonand his army of enhanced warriors, the Kursed, from Thor: The Dark World (2013)

The Yeti only appeared in 2 Patrick Troughton stories, but The Great Intelligence returned much later played by Richard E Grant.

This time he controlled snowmen. 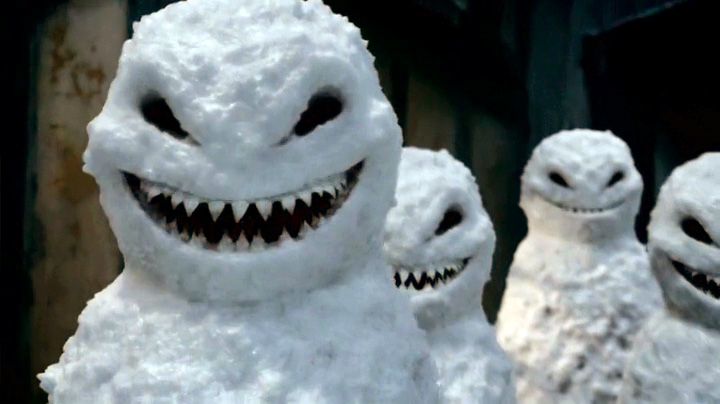 I'm missing something. I can feel it. It's big. It's obvious. And I can't think of it.

But while I've been striving to think of whatever-it-is, I've thought of the following:


Were there ever any major alien adversaries of the various incarnations of Buck Rogers or Flash Gordon?
1 Reply
2
Reply Mon 18 May, 2015 10:29 pm
Of course, there are always the Aquaphibians from Stingray. They were good baddies.

In this scene, Troy Tempest (good looking hero) and his number two called Bones (George W Bush lookalike), are being held prisoner on the Aquaphibian Submarine which looks very much like a large metallic Tilapia fish.

The Aquaphibian dialogue has been conveniently and hilariously subtitled.

I had their lunch box.

I always wanted a "Remains of the Day" lunchbox, but that's another story. 
And of course, every kid used to run around shouting "Stingraaaaay, Stingray"


And this one actually made the charts over here, if I remember correctly.....


Actually the Shadows are already on the list. That list up there is somewhat incomplete. Added the Dominion. #brilliant! Really want to add the Voyager enemy but will have to look for the appropriate image.
0 Replies
2
Reply Tue 19 May, 2015 06:57 am
The Thing (John Carpenter version). Looks like one alien, but it's actually a cellular swarm.

Highly intelligent, Aggressive, Malicious, Ruthless, Adaptable, Sneaky and nearly Indestructible. It's a Cellular army that can replicate any host including animals. If it can replicate a dog it can probably replicate a Rat or a Bird or a Cockroach or a Fly. Nothing more annoying than intelligent cockroaches and flies infecting things with their DNA. For all we know this organism might be able to replicate plants as well. Gardening would never be the same.

The only reason this Thing didn't take over the planet in two weeks flat is because it had the bad luck to crash land in Antarctica and meet Kurt Russell in one of his better films. If it had crashed anywhere else on the planet and started making intelligent bugs as carriers, it would be "Game Over Dude, Game Over!" (to steal a line from Bill Paxton in Aliens) for the planet.

When left to its own devices it replicates anyone or anything it has time alone with, spreads its cells into the water supply and begins building small spacecraft from spare parts in the shed.

And unlike half the other lame aliens who try to take over Earth, this one doesn't have a "hive mind" so it can't be killed by killing the queen or the mother ship or some silly weakness like that. And it doesn't need technology to beat you, it's just nastier all by itself right out of the box. So shutting down the power grid or blasting the whole planet with an EMP to stop technology isn't going to help.

An intelligent microbe that can assimilate bodies, minds and memories and can hijack DNA to create whatever it wants including copies of itself. That's about as bad as it gets.


Space: Above and Beyond - Chigs
http://en.wikipedia.org/wiki/Chigs