WHY DOES THE TOPIC OF ATHEISTS BRING OUT THE CREEPS?

Forums: Crepe Interest, Atheism, Atheists, Creeps, Humor
Email this Topic • Print this Page
Reply Thu 9 Apr, 2015 05:46 pm
When Lil Kay stared the thread entitled "Atheism" years ago, it pretty quickly attracted people who are not atheists, and whose purpose was not to discuss the experience of being an atheist (Lil Kay's purpose), and who seemed to have shown up just to attack atheists. That hasn't changed in all these years.

Does anyone have a plausible explanation as to why people get so hysterical about atheists?
Type: Discussion • Score: 12 • Views: 9,974 • Replies: 97
0
Reply Thu 9 Apr, 2015 07:24 pm
@Setanta,
Why is it, ya figure, that "Christian" discussion websites are quickly infiltrated by atheists who bash them 24/7?
2 Replies
5
Reply Thu 9 Apr, 2015 07:26 pm
I have always believed that in the deep recesses, they are frightened, in ways they might not even recognize. Fear makes them bold. It prompts them to disrupt any meaningful atheist interactions. The boldness, when challenged, quickly becomes hysteria for many. If they can find a sensible attack, they use it. That failing, any other attack will suffice. They babble to keep us from hearing our conversations.
1 Reply
3
Reply Thu 9 Apr, 2015 07:29 pm
@Setanta,
The answer is that Christians know that they are over, that the US is becoming a post Christian place just as Europe is, and they dont like it. They lash out in anger. It is to be expected, let it go.
0 Replies
-1
Reply Thu 9 Apr, 2015 07:32 pm
Why would a thread entitled "Platonism" also attract non-platonists? Why would a thread entitled "Richard Nixon" attract both people who approved and disapproved of Nixon?

I could go on forever. I don't think armchair psychology is needed to answer this question.
0 Replies
3
Reply Thu 9 Apr, 2015 07:59 pm
While this style of crepe is nice

these Japanese ones have an amazing texture and aren't as sweet 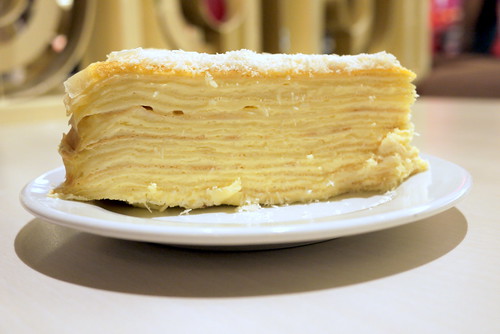 2.5 years and they always run out
1 Reply
1
Reply Thu 9 Apr, 2015 08:02 pm
@ehBeth,
Scarcity by design is a very well known marketing gimmick.
1 Reply
1
Reply Thu 9 Apr, 2015 08:08 pm
@hawkeye10,
apparently it takes 2 days to make one of those cakes - they don't ever make extra at the little Japanese crepe shop I go to a couple of times a year as it can't be kept fresh - which is great for the people who manage to hit it on the day/hours it's available

if they ever did marketing at Millie, the line-ups would be even longer

Suppose I started a thread entitled "homosexuality." And suppose that (unlike littlek) I expressly stated that I wanted to confine the posters in my thread to those who had an extreme aversion to homosexuality and whose purpose was to ridicule, demean, insult and discredit homosexuals in any way they could think of.

Now suppose a few posts in that vein were made.

How long would it be, ya think, before "creeps" came in and expressed a contrary view?

And if I told them they were not welcome in my thread, what do you think their response would be? Do you think they would immediately apologize and graciously bow out? For some reason, I kinda doubt that's what would happen, ya know?
0 Replies
3
Reply Thu 9 Apr, 2015 08:41 pm
@boomerang, I have always believed that in the deep recesses, they are frightened, in ways they might not even recognize. Fear makes them bold. It prompts them to disrupt any meaningful atheist interactions. The boldness, when challenged, quickly becomes hysteria for many. If they can find a sensible attack, they use it. That failing, any other attack will suffice. They babble to keep us from hearing our conversations.


The fear derives from their religion, which makes up a huge chunk of who and what they are, and atheism negates that - for real or imagined, it matters not. Every time an atheist speaks of atheism, they feel something hacking away at their very existence. That is why they cannot live and let live.
0 Replies
1
Reply Thu 9 Apr, 2015 09:01 pm
@tsarstepan,
and what's the deal with crepe-soled shoes?
why?
they stick to floors
weird

but none about crepe-soled shoes

what does that have to do with crepes or crepe?

I remember an edible version of that, maybe not by the same company, were we made gummy like candy.
1 Reply
1
Reply Thu 9 Apr, 2015 10:46 pm
@hawkeye10,
I may look like a girl, but I didn't know much about girl stuff other than corking til I was almost university age.

Creepy Crawlers was a fav of mine, only Spirograph and Feeley Meeley were better inside toys.
1 Reply