Smarty was born in Franklin Township near Newark Delaware , and is owned by a real workin class family who built a car dealership empire from nuthin.
The horses life mirrors Seabiscuit fairly closely except Smarty was almost lost due to a major sinus and eye orbit fracture.


He wasnt even out of breath after the Preakness. When he finished his ears were perked up like he was loafing in the paddock all day. I hope we see a great race. I have no idea what odds are, but I imagine you aint gonna win much
0 Replies
1
Reply Fri 4 Jun, 2004 09:24 pm
I saw the odds earlier. The article said they were dropping. I wouldn't waste any money on this one.
0 Replies
1
Reply Fri 4 Jun, 2004 09:37 pm
I know nothing about betting horses. I caught it just now as 5 to 2. Does that mean that if you bet 5 bucks you win 2 plus your bet? 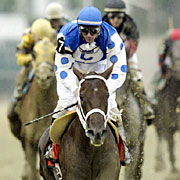 There have been quite a few horses who have won the first two legs of the Triple Crown only to falter at the last and longest. I'm not a TV watcher so can someone help with when and on what network it will be on? Thanks. Go, Smarty.

The Belmont Stakes will be telecast on NBC. Post time for the race is 6:38 EST.